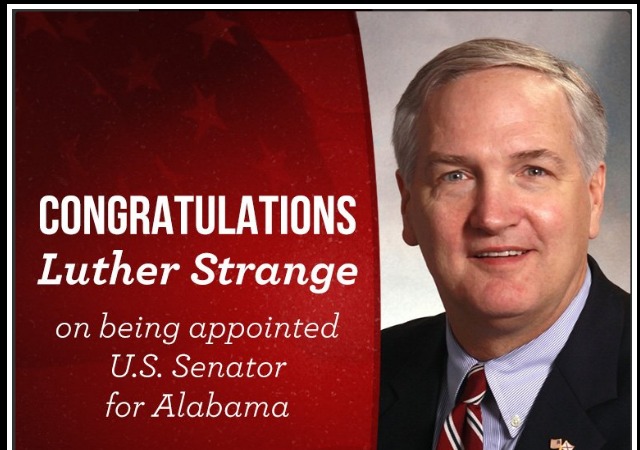 Strange’s swearing in will occur on Thursday.

“This is truly a remarkable time in our state’s history,” Bentley said in a press release this morning. “Alabama has surely been well represented by Senator Sessions, and I am confident Senator Strange will serve as a fine representative for our people. His leadership on a national level, service as a statewide elected official and long record of taking on tough federal issues are the very qualities that will make him a strong conservative Senator for Alabama.”

Strange was also quoted in the statement.

“I am greatly honored and humbled to accept the appointment to Alabama’s Senate seat vacated by Senator Jeff Sessions,” Strange said. “Senator Sessions’ commitment to public service is nearly unparalleled in Alabama history and his departure from the Senate leaves tremendous shoes to fill. I pledge to the people of Alabama to continue the same level of leadership as Jeff Sessions in consistently fighting to protect and advance the conservative values we all care about.”

Republicans will welcome Strange with open arms since his appointment will “avoid a messy battle over Sessions’s seat.” Strange will have to endure a special election in 2018, but can run for the full six-year term in 2020.

Congratulations to RAGA Chairman @lutherstrange on being appointed as U.S. Senator for Alabama! #alpolitics pic.twitter.com/25u2QdUWGG

Wasn’t there some controversy about Strange and the governor? As AG, Strange is/was pushing an impeachment proceeding against the governor? Now the governor has gotten rid of him so he can replace him with somebody a little more “sympathetic”? Or something like that?

Does anyone know if Sessions has been sworn in yet?

Sessions has been sworn in. In Alabama there’s been some drama about Strange investigating the Governor for getting some honey on the side, but I’m not really up on that. All reports are that Strange was the easy front runner for this seat in the 2018 election, so it made sense to go ahead and appoint him to the spot now.

Sessions’ swearing in ceremony was in the Oval Office at 10:30 a.m. Eastern this morning.

There are a hell of a lot of articles about this guy that have been published, already, so I’ll just put up one from a local newspaper in 2014.

He did not follow the Obama Administration line as well as the paper would have liked, but they reluctantly admit he is a competent, fair-minded and vigorous prosecutor.

Sigh. Ok, everybody get the ‘Strange’ puns and wordplay out today so we don’t have to live with it for the next few years. 🙂

And today’s facebook meme is: “There is a rumor going about that Senator Jeff Sessions’ replacement in the Senate will be a guy named Luther Strange.” If he’s not a mad scientist supervillain with a name like that, I will be SO disappointed.”