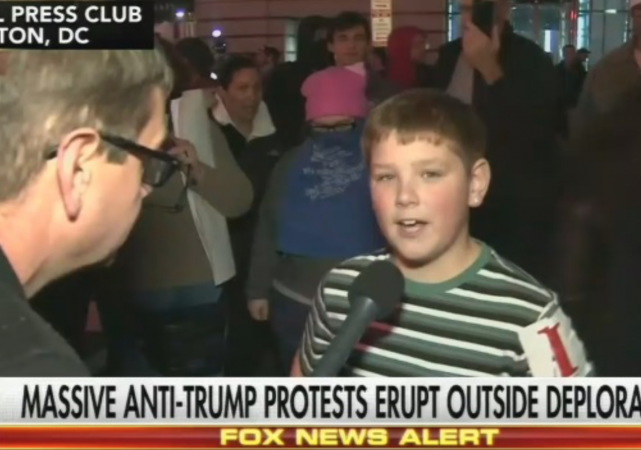 It was a remarkable live-TV moment. During Tucker Carlson’s Fox News show, reporter Griff Jenkins was at the scene of an anti-Trump demonstration in DC where a fire had been set in the street. Suddenly, a young boy [maybe 10-11] stepped up to say that he “kind of started the fire.”

When Jenkins asked why he started the fire, the boy, who identified himself as “Carter,” said “because I felt like it and I’m just sort of saying, screw the president.”

A bit later, Charles Krauthammer said there’s a “whiff of ISIS” to the way parents are exploiting their children in this say. Said Tucker: “The idea that you would implicate your children in your political activism, you’d be out on the street at 9:30 at night. It’s demented.”

FOX NEWS REPORTER GRIFF JENKINS: We’re outside the National Press Club. You can see the police presence. There are signs thanking President Obama. Obviously, tt’s mostly peaceful now. A fire broke out just behind us. There is a fire over here. We’ll show you where that was. The ashes now just sort of starting to simmer right in the middle of this. Excuse me one second. This fire was started. In fact, this young man, you are participating in the fire. What’s your name?

BOY: My name’s Carter and I actually kind of started this fire.

JENKINS: So why did you start that fire, Carter?

JENKINS: Sorry. Why did you start that fire?

BOY: Because I felt like it and because I’m just saying, screw our president.

CHARLES KRAUTHAMMER: Incidentally, can I say a word about that kid who was setting the fire?

TUCKER CARLSON: That was bizarre.

CHARLES: Yeah, but wouldn’t you love to be that kid? Parents who take you out on a winter night and they encourage you to set fires? I’m sure it would have appealed to the anarchist in you. But it tells you how completely weird the parents and the other people out there are. They are the same people who show up at the IMF meetings, at World Bank, the Occupy Wall Street.

You ask them why are you out there, they are completely incoherent. What did that woman say? There are Nazis upstairs at the National Press Club. I mean, these people ought to be medicated.

TUCKER: I think some of them are. But the idea that you would implicate your children in your political activism, you’d be out on the street at 9:30 at night letting your eight-year-old set fires is demented. It says a lot.

CHARLES: It’s got a whiff of ISIS to it.

Krauthammer nailed it with the “whiff of ISIS” comment. Only a blindly obsessed parent who promote or allow that.

I imagine the parents are proud of their son. Some rather painful public humiliation for son and parents is needed to catch on switching they all needed when children.

Not a day goes by without a child welfare agency taking children from their parents for a lot less.

Encouraging your child to set fires? How are they “fit” parents?
But since most state child agencies are run as leftist enforcers, don’t count on anything being done.

I will bet you a dollar that is his mother in the background wearing a pink hat and covering her face.

One of my biggest shocks after the Bush vs Gore meltdown was reading a column on Salon and a women commented “How do I tell my 3 and 5 year kids that they man they hate, George Bush, just won the whitehouse” What parent teaches 3 and 5 year old children to hate anyone? This was a prescient comment for what now is commonplace.

Same thing happened in Salon or Slate one with some scrunt wondering how she’d convince her son not to be a rapist with Trump for an example.

These people are unhinged.

If the person to be hated is a conservative, the parents can leave the job to the school system.

It’s Winter. The 7-day forecast is for snow. Assuming a semi-stable system, the prediction is for Spring in March.

What do they know that everyone else in the world could not possibly know?

The allies of West and East will confront the axis of terrorism from Benghazi to Aleppo to Kiev… to Berlin and beyond.

An end to progressive wars and refugee crises.

A return to principles.

This is why black eyes and bloody noses were invented: to educate children of malignant fools.

Not to mention kicks to the groin. Especially the parents’.

Exactly. Then the ‘fools’.

He was just working on his SJW merit badges, had to finish up incoherent protesting and garbage fires before the useful idiots rally Friday.

This Youth should bless his parents./sarc

Hmmmmm….what is the charge against parents who deliberately tell their son to commit arson?

He’s just assuming, like mom and dad, he’ll need all that Democratic entitlements because he’ll only get to the 8th. grade.

The next Bill Ayers?

Mommy and Daddy are so darn proud of Jr! The cute little firebug.

Kids that set fire can have major problems as adults!

He will fit perfectly with the loony left.

That kid needs a smack in the mouth. And so do his parents. Also, arson is a crime. They all need arrested and hauled off to jail.

Remember the boy’s name; probably will be front page news in a story about arson related deaths. Wish I was kidding.

Makes one wonder how he conducts himself in Middle School as he appears to be 12/13 yrs. old…Oh well. You’ll be more than likely to see him under court ordered supervision before he ages out at 16 if this is his normal acting out and attitude as he moves into his teenage years. Then his parents can explain to the court how sweet and innocent he is because they sure won’t hold themselves accountable for it.

Immediately after the election Lisa Falkenberg, a Pulitzer Prize winning columnist for the Houston Chronicle, wrote a couple of columns on the trauma of Hillary losing, and how difficult it was for her to explain to her 4-year-old daughter this devastating blow to feminism.

Have the police seen this? Shouldn’t this young man and his family have chargers against them? Just wondering — this is very upsetting!
As said earlier — a fire starter is a fire started and this will most likely NOT be the last fire this child sets!