Trump chose him to lead Housing and Urban Development. 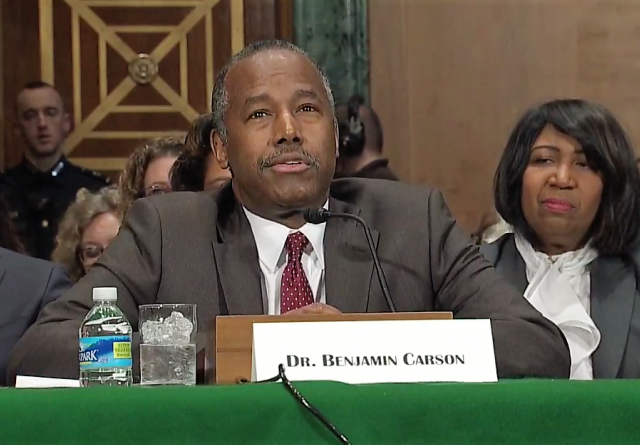 Former presidential candidate and retired neurosurgeon Ben Carson, President-elect Donald Trump’s pick for Housing and Urban Development Secretary, will have his confirmation hearing today at 10AM ET in front of the Senate Committee on Banking, Housing, and Urban Affairs.

Carson turned down Trump’s request to leads the Human and Health Services, but accepted the HUD nomination. He often fought with Trump in the primary and even said he would never work in Trump’s administration. Trump chose Carson for “his ‘brilliant mind’ and passion about ‘strengthening communities and families within those communities.'” Carson has said:

“I grew up in the inner city and have spent a lot of time there, and have dealt with a lot of patients from that area and recognize that we cannot have a strong nation if we have weak inner cities,” he said.

The hearing has ended at 12:33PM ET. Honestly, I doubt Carson will have any problem with confirmation. Everyone liked him and he did so well.

.@TomCottonAR brings up homeless veterans “I think it’s an appalling failure of our government and our society.”

.@SenatorHeitkamp says she thought “you might just be the right guy” because he understands brain function & why people end up in poverty

Sen. Tester asked Carson about having a 30 year mortgage without a government guarantee. Carson said yes, with the private sector.

Carson said that he will go through HUD and eliminate any waste within it. Hasn't noticed any sacred cows within HUD.

Tilis doesn't want to talk about hypotheticals. He & Carson agree they want to get ppl off govt dependency.

Sen. Tillis bashes warren over her question to Carson. Praises Carson for not taking the bait and staying honest.

Carson is weary about over-regulating

Carson talks about the red tape Native Americans have to go through to build. Says it's ridiculous.

Carson says things will be “incredibly different” under his supervision.

.@brianschatz, a Dem, says that it doesn’t seem like Carson wants to undermine HUD which he says Dems feel other Cabinet nominees do

.@RealBenCarson on veterans: People who risk their lives should never want for anything

Carson: I can assure you that things that I do are driven by a sense of morals and values +I will absolutely not play favorites for anyone

.@RealBenCarson: If there happens to be an extraordinary good program that works for millions of Americans I won’t deny it to people

Carson says what he said about cutting programs by 10% was “a concept” that he revised. Also mentions national debt.

.@RealBenCarson: "I think the rental assistance program is essential."

Rubio: He believes it because he has lived it.

Rubio: HUD is also about the American dream, empowering people, no matter where you're born.

Sen. Sherrod Brown praised Carson, but also noted that Carson has commented about cutting government programs. Brown said these could be harmful. Brown also said that Trump’s plans have nothing in it aimed at Carson’s proposed department.

Sen. Mike Crapo introduced Carson, noting that he grew up with a single mom in an impoverished part of Detroit. He worked hard, attended Yale and University of Michigan Medical School.

Ben Carson has arrived on Capitol Hill for his confirmation hearing. Asked how he's feeling, he replied with a ?

I’m glad that good decent men such as Ben Carson will be holding (some of) the reigns of power in Washington and he seems to have a grasp of free markets and what they’re capable of.

No one is perfect but he’s one of the good guys!

While I respect Dr. Carson and his achievements as a surgeon, this office just doesn’t strike me as a good fit. I’m still left asking ‘Why?’ whenever it comes up.

He has direct experience on the receiving end of HUD policy.

I think that Dr. Carson’s role is going to be less as an administrator and more as a preacher. That is, he is going to be preaching a message to those in government housing (and the inner cities in general) that is quite different from the Democrat’s message of dependency and victimhood. He is just the guy to do it. I think Trump wanted to give Carson a soapbox and this is probably the best place to do it. Who pays any attention to the Surgeon General?

McCain: Do you believe we have the best military?
Mattis: No (end of question).

Thank god the adults are coming!

I truly look forward to seeing what Dr. Carson can do with his new position. I hope he will have some balancing influence within this administration.

according to the progressive left, balancing against the Unbearable Whiteness of Being.

Balance against too much winning???

Rearranging stuff on the island of Guam so it doesn’t tip over?