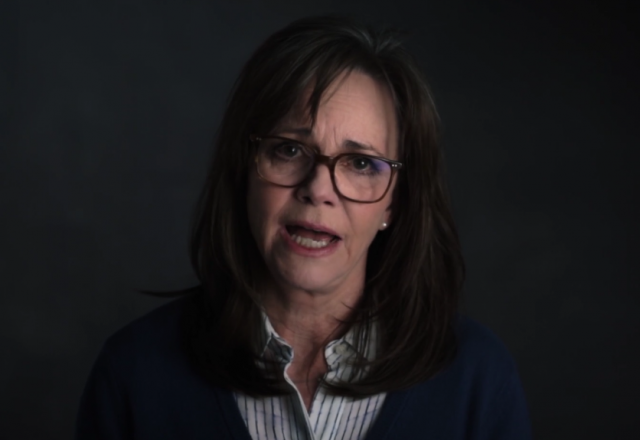 A group of “celebrities” has just released a video calling on Congress to obstruct Trump nominees and anything he does that violates their values.

The Hill reports, Celebs call on Congress to ‘Stand Up’ to Trump:

“We demand that you block nominees who threaten the rights of women, the LGBT community, people of color, immigrants, and the poor,” Key and Field say in the video released Tuesday, the same day the 115th Congress is poised to be sworn in.

The message — which asks supporters to sign a MoveOn.org petition to be sent to members of Congress — was created by the social media campaign Humanity for Progress, formerly known as the pro-Hillary Clinton group, Humanity for Hillary.

#StandUpForUS from Art Not War on Vimeo.

I’m not sure “high profile” is how I would describe them. Most of them, like Sally Field and Toure, are pretty washed-up, and the others are not exactly household names. Here’s the list from the Vimeo page:

That the video directs people to a MoveOn.org petition is not surprising. Much of what passes for leftist activism these days is simply a mechanism for groups like MoveOn.org to gather names for their mailing lists. 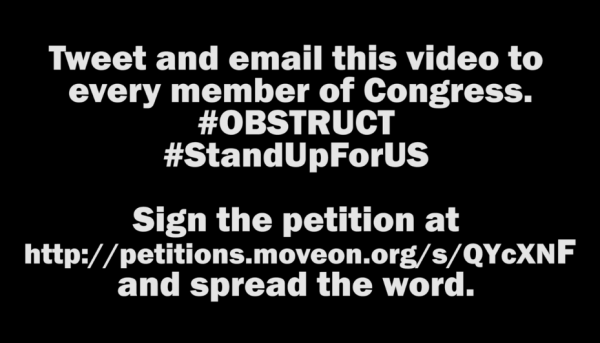 The “Stand Up For Us” theme has been used in MoveOn.org produced videos before. 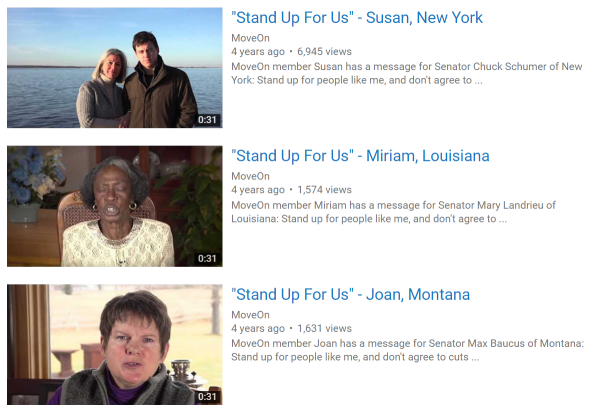 Paid pretenders. And not very entertaining ones at that.

who ??
nobody that matters.
nuff said.

Sorry about the down vote, I missed the reply button.

I feel so good! Sally Field is the only name on the list that I recognize.

Sally Field, whose days have pass,
Rosie Perez, who always irritated me and
Steve Buscemi who should have listened to John Goodman when he said “Shut the f#ck up, Donny!”

The same three I recognized! All of whom are now on my “no buy” list.

If they want to be political, fine. I will show my disapproval by refusing to pay for their upkeep with my entertainment dollars. Easy-peasy.

Why do celebrities think that we care about their views? How self-absorbed!

And why do they never learn that no one cares? Remember that Demi Moore/Ashton Kutcher “I pledge” video about Obama? What a laughingstock that became. The “celebrity” video about the EC didn’t do a thing, either (except let us know who they are). Yet they just keep on doing it.

Can anyone please tell me what, if anything, points to any validity surrounding their so-called fears?

“We demand that you block nominees who threaten the rights of women, the LGBT community, people of color, immigrants, and the poor,” Key and Field say in the video released Tuesday, the same day the 115th Congress is poised to be sworn in.”

Reference post-modernism, wherein reality and truth are subjective to the eyes of the beholders. Specific to the above crowd, ANY cabinet candidates who aren’t dyed-in-the-wool moonbat leftists are categorically held to be threatening to their growing lists of ‘victims’.

As someone noted elsewhere, these people use their own paranoia as a gauge of Trump’s threat level and as justification for their fears.

There is nothing. They base these fears on mis- or incomplete quotes and on pure fantasy. For example, Trump didn’t say that he wanted to ban all Muslims, including U. S. citizens, from the entering the U. S. for all time. He said, quite reasonably, that he wanted to establish a temporary ban until the government could figure out what was going on–noting, in this point, that the feds have no idea who these refugees are, and etc. He clearly meant “refugees” from Syria and other ME or North African countries (where the refugees are coming from), and he clearly meant it to be a temporary measure until some kind of viable vetting process was established. We know this because he said the words “temporary” and “until they can figure out what is going on.”

This is not just reasonable but logical and smart.

What the left heard: No Muslims allowed in America at all. None. Deport them all, stop U. S. citizens from returning from European vacations, or football tours, heck! Even Muslims in the armed forces should never be allowed to return.

Ditto the whole thing about Mexico dumping its criminals and rapists here; that’s true (Castro did the same thing). But instead of noting the truth of this, the left went insane and said that Trump hates all Mexicans and thinks every last one of them is a rapist and murderer. It’s actually crazy and sounds crazy, but people actually believe it anyway.

I blame our education system where children (including the wee kiddies playing with coloring books and Play Doh in college “safe spaces”) are taught to hate Republicans, to have a knee-jerk visceral reaction against anyone who doesn’t think as they do.

You teach this for long enough, with no other viewpoints or ideas, and you get a huge mass of close- and narrow-minded reactionaries who willingly believe the ideas they’ve been fed, who can spew them back on cue, and who are incapable of critical or independent thought.

These morons are simultaneously assured that they are the only thing that matters in the entire world, that their every thought and action is of such incredible import that it dwarfs everyone around them. They get “participation” awards, they are indulged to the point that they become precious little snowflakes who melt at the mere mention of an idea they haven’t been spoon-fed and taught to trot out like a robot.

It’s kind of sad, really, when you think about it. Can you imagine being so screwed up that you believe you are not only the center of the universe but that your every thought, sexual act, and random recitation of your “gospel” is “THE word”? Can you imagine thinking for even a moment that your itty bitty feewings are so important to the entire nation of 300 million people have to stop and praise you, change their thought patterns, belief system, and moral code to conform to your worldview? It sounds rightly crazy to us, but that’s what they really, truly, deeply believe.

We can never ever change their minds because they don’t have minds in the normal sense; they have “narrative” depositories. We can quote Trump’s actual words all day long, and it won’t change a thing because once the truth bumps against one of their narrative deposits, they just shriek “Liar! Fascist! Xenophobe! RAAACIST!”

SO high minded. SO deep. SO well read and thoughtful. SO rarely exposed to the unaccustomed Torture of Thought.

If the Flying Nun tells me to obstruct, I guess I should.

Not to mention Forrest Gump’s mama.

But, but. but she was so supportive. Run, Forest , Run!

Still can’t look at Sally Field without Gidget popping into my head.

Well she is on the other side of 70 now.

“I need well-thought out cultural and political ideas to help me navigate this crazy world. Find me an actor!” said no one, ever.

When Reagan makes a video. No, not his sissy son.

…was created by the social media campaign Humanity for Progress, formerly known as the pro-Hillary Clinton group, Humanity for Hillary.

What, now that Hilloser is gone, Humanity can actually work for ‘Progress’? Yeah, I can see Hillary and ‘Progress’ being mutually exclusive.

This cries out (literally) for a parody.

Refugee crises (a.k.a. immigration reform). No.

We demand that you block nominees

What a crafty plan. Nobody saw that one coming, I’ll bet.

This is almost as ground-breaking as those tactical memos Barbra used to fax to the DNC.

There really should be a season for the asshats.

get with the program Bob, it’s “pussyhat”.

Roper: So now you’d give the Devil benefit of law!
More: Yes. What would you do? Cut a great road through the law to get after the Devil?
Roper: I’d cut down every law in England to do that!
More: Oh? And when the last law was down, and the Devil turned ’round on you, where would you hide, Roper, the laws all being flat? This country’s planted thick with laws from coast to coast– man’s laws, not God’s– and if you cut them down—and you’re just the man to do it—do you really think you could stand upright in the winds that would blow then? Yes, I’d give the Devil benefit of law for my own safety’s sake.

I’ve been getting a lot of mileage out of that dialogue.

That great dialogue is from Robert Bolt’s play (and movie of the same name) “Man For All Seasons.”

I think Sally’s hair coloring has leaked in to her brain (if there is one there).

Also, the video would not load for some odd reason. My firewall must be kicking it and has identified it as trash.

a: Brats
b: Useful idiots
c: Arrogant ignoramuses
d: Whores trying to further their waning careers
e: All of the above

Their agenda is more important than democracy. Tells you everything you need to know about them, right there.

“Trump repeatedly slammed Ford on the campaign trail, claiming the company was moving good manufacturing jobs to Mexico. He vowed to slap a 35% tariff on Ford vehicles made in Mexico and sold in the U.S.

Ford fought back against Trump’s rhetoric, saying he had his facts wrong and that the company never planned to cut any U.S. jobs.

“The automaker also said it is canceling plans for a new $1.6-billion plant in San Luis Potosi, Mexico,…”

I remember when Tony Soprano killed Steve Buscemi’s character, and I said, “Finally!”

I haven’t loved Sally Field in about thirty years.

Hmmmmmmm. All of a sudden, after eight long years, elections DON’T have consequences.

Calling these folks “B-List” is a little generous, don’t you think…

I REALLY resent that they signed out with “signed, the Majority of the American People”. Who are these scam artists (people who speak lines other people wrote) to speak for me? How do I tell them publicly to “BITE ME”.