Reducing feminism to its most ridiculous denominator. 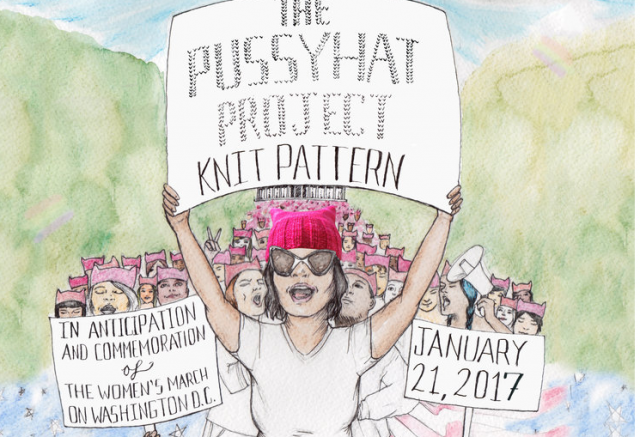 I thought safety pins were the most ludicrous symbol of political protesting ever used.

However, that stupidity has been completely surpassed by the Pussy-Hat.

Let me give you a little background on the latest social justice buffoonery. As savvy Legal Insurrection readers may be aware, a “Million Women March” is being planned in conjunction with Donald Trump’s presidential inauguration festivities. It has wisely been rebranded “Women’s March on Washington” (as I suspect the final count will be slightly shy of 1,000,000 participants).

Reviewing its mission statement, it is obvious that the organizers are tediously propagating the standard fare of progressive gender justice inanity.

The rhetoric of the past election cycle has insulted, demonized, and threatened many of us – immigrants of all statuses, Muslims and those of diverse religious faiths, people who identify as LGBTQIA, Native people, Black and Brown people, people with disabilities, survivors of sexual assault – and our communities are hurting and scared. We are confronted with the question of how to move forward in the face of national and international concern and fear.

In the spirit of democracy and honoring the champions of human rights, dignity, and justice who have come before us, we join in diversity to show our presence in numbers too great to ignore. The Women’s March on Washington will send a bold message to our new government on their first day in office, and to the world that women’s rights are human rights. We stand together, recognizing that defending the most marginalized among us is defending all of us.

What better attire to wear to this event than than the “Pussy-Hat”? I do think it sets the proper tone for their movement! 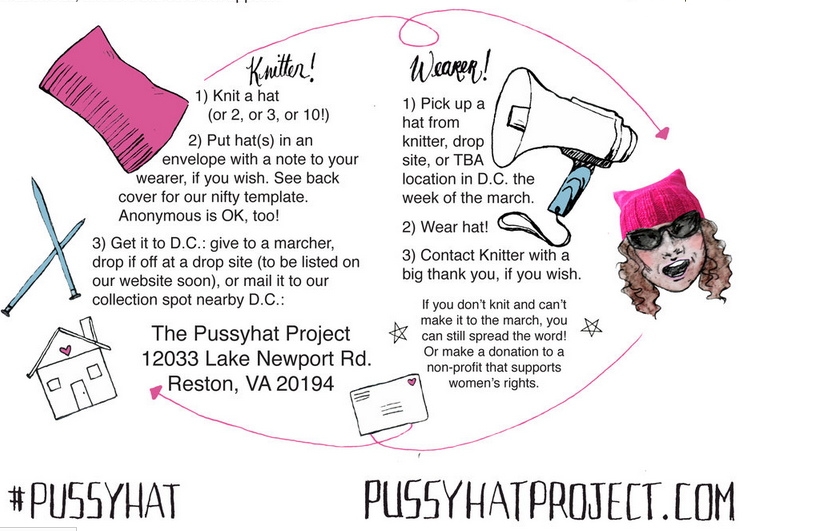 The organizers of the “Pussyhat Project” are based out of southern California. In fact, one of them is involved in reworking the “Dukes of Hazzard” with female leads. Their goal is lofty:

The Women’s March on Washington D.C. is happening January 21, 2017! The Pussyhat Project launched Thanksgiving weekend! As of now, we have 30 days to knit, crochet, and sew 1.17 million pink pussyhats. Join the movement!

Progressives are using their outrage at Donald Trump’s use of the word “pussy” 10 years ago as their justification to foist this insanity on fellow feminists.

“It’s wonderful to see younger women embrace the term pussy, the color pink, and the power of the handmade and take all of those pejorative terms that have been used to put us in our place and use them to form some sort of communal power,” said [Celia] McCarthy, who lives in Berkeley and is the co-owner of Piedmont Yarn in Oakland.

The hats can be registered on the Pussyhat Project website. The organizers claim that an astonishing number of these creations are now available.

While it is impossible to know exactly how many people are participating in the project, [organizer Krista] Suh thinks there are between 30,000 to 100,000 pussy hats already made. Around 60,000 people have looked at that pattern posted on the website, with more looking at the website. There have been thousands of tweets and more than 2,000 Instagram photos. One woman wrote on Instagram about a 99-year-old who was knitting hats for marchers. A Pennsylvania woman has made close to 100 pussy hats and is selling them for $15 on Etsy.

I predict that Donald Trump, if he notices this protest at all, will have a hearty laugh and a clever tweet over these hats.

I also suspect that more women will be paying attention to the stylish attire being worn by Melania and Ivanka Trump, and that the sales for Ivanka’s tasteful and affordable collection will increase. They will probably respond to the pink hats with a combination of head-shakes, face-palms, and eye-rolls.

However, I am saddened to see women acting so ridiculously in the name of women’s rights…especially as progressives have taken to trampling on those rights for certain women.

The up side of this project is that it gets women back to knitting, which is one of their domestic duties. How about a scarf and gloves for me while they’re at it?

These will be popular with teenage boys who will keep one under the bed. Why use an old gym sock when you’ve got a pussy hat?

…and after knitting the hats, the women can use the needles for an abortion! A two-fer!

Funny. I’m pretty tied in to various knitting circles and this is the first I’ve heard of a call to knit a “Pink pussy hat.”

” the stylish attire being worn by Melania and Ivanka Trump, and that the sales for Ivanka’s tasteful and affordable”

While making fun of the left’s over the top ridiculousness it’s likely better not to act like them. Tasteful? Yes, mostly. Affordable? Oh, please. Ivanka and Melania are NY elitists and trying to pretend otherwise makes their sycophants as ridiculous as the women in the kitten ears.

I’m not student of fashion (women’s, or men’s), but I think Ivanka’s designs are in the affordable range for many. You decide:

I have no idea what Melania wears.

Well, they are produced in Third-World countries…never the USA…to keep the costs down and the profits high.

I just followed the link, and the prices are not bad. If I were a bit younger I might even order one of her dresses. Simple and sophisticated, but a little short for someone my age. Hmmm, perhaps I should shoot her an email and tell her how she could expand her market!

Snort. I’ve never paid $200 for a purse in my life. But by all means keep making excuses for a NY elitist born w/a silver spoon in her mouth charging outrageous prices for goods made with Chinese slave labor.

If you want to be taken seriously, then you do not wear a leisure suit to a black tie event. When you dress the part of the fool, everyone will take you as a fool. If women show up wearing these silly hats, does anyone really think they will be taken seriously or do you think they and their cause will be mocked?

Oh, let’s do let them find out the hard way.

This could all be a plot to induce new skill sets in crazed feminists.

Baking and knitting are good places to start…

I can’t decide whether to stock more ammo or pink yarn. There will be long lines and shortages just like the oil embargo and I might be able to sell pink yarn for a tidy profit.

Hey, looks like Trump is putting Americans back to work. Think about it! All the business he is creating out of this. Made in American Pink Hats! Think of all the food they will eat. T shirts! Way to go Trump! Keep boosting the economy.

Just think of the retail market for this group. Paper products galore! I see a new market emerging funded by Soros and we get to benefit from it. Capitalism lives!

Uhhh, looking at the picture, they do realize that the inauguration is on January 20th, not the 21st, right? 🙂

I think the 20th was their original intent. For some reason, they couldn’t get the required permitting.

What’s the bet the media will focus on protesters who do show up on the 20th?

The media will be spending the 21st hyperventilating over the hundred of Obamas Executive orders and regulations that Trump nullifies in his first 24 hours.

This is tied to the million women march, which is planned for 1/21.

“…people who identify as LGBTQIA…”
.
As one who identifies as LGBTQIAEIEIO, I find their lack of inclusiveness appalling. I plan to protest their protest by grabbing some hats.

So, a farmer are ya?

I think there was a cartoon about this in the 70s.
Josey and the pussyhats.

Yes, just like all of his hotels. In fact, you have to go to Myanmar if you want to stay in his NYC hotel.

Sorry, this was meant to reply to Rags’ message (above).

The great thing about crazy idiots is their ability to self-identify so sane people can avoid them. Several years ago, all we had to spot them was Hope and Change bumper stickers, but now we’ve tricked them into wearing stupid hats.

Yep, that Vast Right-Wing Conspiracy is clever, all right. By comparison.

I am astonished that the NOW, feminist movement that perported to make women have equal rights as men, to stop the “objectification” of women…….have been reduced to:

Let that sink in. Women, in the eyes of feminists today, are a slang term for c-word.

Not just that, they are encouraging women to do something (knit) that has traditionally been women’s work. What’s next? Encourage women to go back into the home and raise a family? I’m so confused.

If the crazies in the ‘Cocks Not Glocks’ crowd get ahold of one of these hats they’ll never leave the house. They’ll sound like a four year old playing with matchbox cars.

My first thought was that these people are asshats. I was anatomically close, but off a bit. Taint my fault

“Asshats Knit Pussyhats” would have been the best headline since the New York Post’s legendary “Headless Body in Topless Bar”.

A nice wool hat for outdoors in January? It sounds very practical.

It just don’t add up.

I do not vote for any party that uses rent-a-rioters.

Purge the criminals from the party, first. Then we can talk.

Against the competence of Donald Trump and the rejection of the hysterical, corrupt and incompetent Hillary Clingon (and they hysterical, incompetent fraud, Jimmmy Obama), finally, these people will look like the juvenile ignoramuses they are.

Though against the likes of pussies McConnell or Ryan, they look respectable.

“…In Numbers too big to ignore.” Shout out to our great leader of the 1970s, Helen Reddy.

I am woman, hear me bore, in numbers too bog to ignore.

I ain’t no OB/GYN but I have seen a few of them things over the years and they don’t look nothing like those hats.

Life can be confusing. I’m guessing if their pussy hat is a 7 3/4 they need to cut back on the size of the inanimate objects they are putting in the real thing.

I’m hoping for a blizzard on the 21st so they can truly get the benefits of their hats.

Can you imagine what flack Trump would take if he used the term “Pussyhat”?

These protestors make a mockery of themselves.

It’s really hard to take people seriously who think wearing a pussy-hat at a march will do anything to change other’s positions.