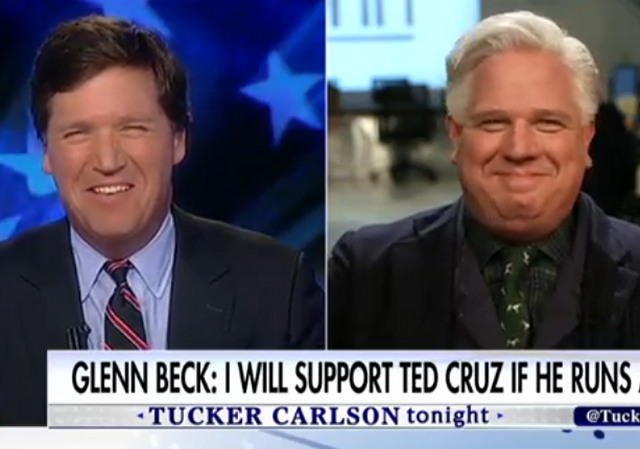 Tucker Carlson aired his first show in his new 9 pm time slot on Monday night and featured as his first guest on the program, former FOX News host Glenn Beck. It seemed like an odd choice but it did make great TV.

Tucker kicked off their conversation by asking Beck for his thoughts on the election but their talk quickly moved to Ted Cruz and faith.

‘Did it Shake Your Faith?’: Tucker Carlson Grills Glenn Beck About Trump’s Election

On his first broadcast at the 9 PM ET timeslot, Tucker Carlson began the program with Glenn Beck, and right away it got pretty interesting.

Carlson kept pressing Beck about his religious faith, wondering if his belief and faith had been shaken due to Donald Trump’s election, considering that Beck had previously said that Ted Cruz had been anointed by God to stop Trump.

Carlson asked, “Because he didn’t win and Trump did, did it shake your faith?”

The Fox News host also grilled Beck on his feelings towards Cruz, bringing up when Glenn got upset with Cruz for endorsing Trump late in the campaign. Beck calmly said that he and Cruz are still friends to this day and that he was mostly disappointed with the timing.

The Blaze founder also explained that he would never endorse another candidate in the future and that while he didn’t support Trump, his political beliefs have not changed as he’s still a libertarian.

Tucker went on to ask Beck about his own FOX News show and if the rumors of financial trouble at Beck’s internet venture “The Blaze” are true.

Things then got really personal with questions about being happy in life and defining success for oneself.

You can watch the whole segment below:

Tucker asked for feedback on Twitter and got some entertaining responses:

What did you think about my interview with @glennbeck? – TCT #Tucker @FoxNews

@TuckerCarlson @glennbeck @FoxNews i've been drinking, so i give it a 5 out of 5

@TuckerCarlson @glennbeck @FoxNews You were too nice in my opinion. Good, though. ????????

@TuckerCarlson @glennbeck @FoxNews
Not a good choice for your 1st 9pm show. Beck has gone off the rails, he hardly makes sense anymore.

@TuckerCarlson @glennbeck You did a great job interviewing a man who is unhinged and sanctimonious. Keep it up!

@TuckerCarlson @glennbeck @FoxNews You had him near tears at the end. I would have pushed him over the edge, but I'm deplorable. #Tucker

I think it shows the human side of Tucker. That he has empathy for the sick, addle-brained, loonie tunes in our society such as Beck.

I just hope Carlson resists the urge to go down the road Hannity has chosen, which is to have some unhinged loon on every night just so he can pick a fight with them.

So far Carlson does have loons on, but he treats them respectfully.

And in other news about the news, the New York Times and Washington Post have lost the Fake News battle with Breitbart and Reddit, so the WaPo has declared strategic retreat.

The Russian embassy tweeted out a message with a pepe, triggering SJWs everywhere. The denizens at The_Donald have been, once again, laughing their a$$es off over it.

The next and obvious step is to make the mistake of saying these people actually trust Putin.

While this silly business is going on, Redditors are ALSO interviewing Julian Assange online, and noticing that the broadcast of the hearing on Jeff Sessions’ confirmation had “audio difficulties” while his record of civil rights was being read.

When you have a crowd of 300K capable of publishing, somebody is always awake, and watching. Split attention is less of a problem.

I’m not convinced on the reliability of Breitbart yet. Ignored it at one point during the election cycle as it was attacking every Trump GOP opponent. I’ve starting sampling and it seems better, although it is still primarily a voice for Trump. Which is fine. But it doesn’t make it any better of a news source.

Avoiding the commenters is still mandatory. Although a small fraction of the total, there are still some extreme far right types who seem emboldened to post any anti-whoever idea.

I agree with your take on Breitbart. The commentators, as a whole, are very close minded and are unable to debate or discuss anything that is even neutral towards Trump. Some of them found their way to LI and that is obvious with the name calling and vitriol. It is getting better but what will it be like once Trump takes office and does not do what he promised? Or does something that appears to be opposite to what he said during the primary? I can only imagine what the commentators will be like then. If you really want to stir the pot at Breitbart, go there and say you wish that Cruz had won! It’s like throwing chicken necks to a pool full of hungry alligators!

Not that it’s really important, but if anyone wondered I’ve been a die-hard Cruz supporter from the start, volunteered in his 2014 campaign when nobody instate gave him much of a chance and got to meet the man a few times. & I voted for him in this years primary, too.

Still, in retrospect I don’t think he could have won a general election this year. He plays well in Texas, but he just gets under the skin of everybody else, especially up north. As much as I like Cruz, I just don’t think he had a chance of doing what Trump did against Hillary.

Milo Yiannopoulos (sp?) is the best thing going for conservatives in the younger demographics right now. It’s not even close.

I’ll admit that Ben Shapiro is a good second, but like I said it’s not close. Milo is the guy who will fight back for them as they get hung out to dry by higher ed admins.

Maybe Tucker just wants to be clear that he will question people of all ideologies for what they say or write. He wanted to go deeper on Beck’s calling of God position, which I thought was good. And it gave Beck a chance to further explain or backtrack a little. Not sure which.

The Beck interview was a bit difficult to watch but Mike Rowe was a breath of fresh air. I wish we’d see more of him on labor issues.

Beck’s thinking is unstable and irrational, like a high velocity ping-pong ball inside his own little cube of awareness! There are good reasons why he was canned from CNN and Fox, and also why his own media adventures consistently tank. Sometimes I think that Beck is just on some long term self-promotional tour, a tool looking to be used.

The best question was “does being in this business make you happy”, and Beck answering no. Seeing the world in Manichaean terms is always going to take a toll on you, especially if that’s how you spend all day, every day and measure your success by how much change you are able to affect. I’ve seen it consume and destroy more people on the left than the right, but its a danger to anyone who does this sort of thing full time.

Conservatives also have to bear the burden of the knowledge that the USA is really only a few bad decisions away from failure at any point, and especially so after 8 years of Obama’s “Hope and Change”. Liberals get to be either blissfully unaware or perhaps even see it as an opportunity for them.

I do like Tucker’s style of asking very direct questions and I’m glad he was able to interview Beck. I know many people have written Beck off, but as his best he was truly amazing (Van Jones). And, as a former Cruz supporter, I also agree with him that the jury is still out on Trump and now’s the time to wait and see what he does or at least plans to do rather than criticize him, like the left is doing now.

I enjoy Carlson’s wit and bright mind but I am beginning to worry that this is going to become a FNC “Gong” show. There are only so many nerds, snowflakes and liberal twits that are entertaining and then it becomes tiresome. He needs to start bringing on smart people who have differing views on serious subjects top keep up his audience. He is respectful to all and that makes him even more enjoyable to watch.

I’m not so sure that at least for the first year or two of Trump’s tenure there won’t be an endless supply of vitriolic and baseless attacks with all kinds of unsupportable statements and name calling. Just my opinion, but I think that if polling shows he and the GOP Congress are getting improving performance reviews (polls), those with a vested interest will ratchet it up. Not just niche sites, but more popular sites and papers.

Great interview! Beck was vulnerable and Tucker knew it. Some posters need to get a life.