Republicans hope to have the bill on Trump’s desk by Feb. 20. 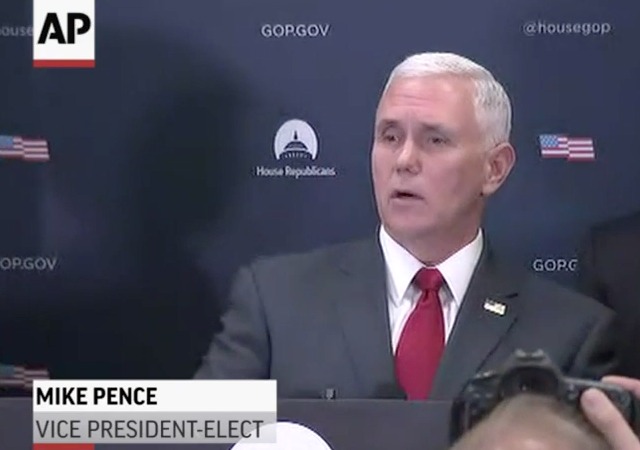 Republicans gathered on Capitol Hill with Vice President-elect Mike Pence to discuss Obacamare where he announced that President-elect Donald Trump plans to use executive action to repeal the law:

He insists the repeal “needs to be done” and they will “keep our promise to the American people.”

Pence and other Republicans did not offer many details or specifics from the meeting. But others have leaked a bit of information:

According to a GOP aide, the plan is to use a powerful budgeting procedural tool — called reconciliation — to speed the repeal process, a process that the Senate began yesterday. The expectation is that legislation will land on President Trump’s desk by late February.

“He said the effort to reform health care starts today,” according to a lawmaker who was in the meeting with Pence. “President Trump will do what he can through executive action to make sure there is an orderly transition for the American people…and it will also require legislation and we will work together. And we will coordinate that. “

Both Pence and Trump have urged fellow Republicans to remind the American people that the failures associated with the law belong to the Democrats:

Sen. Mike Enzi (R-WY) kicked off the new Congress with a resolution “that makes it easier for the Senate to approve repeal legislation and calls for four distinct committees to send over a legislative plan by jan. 27.” Fox News reported:

“Today, we take the first steps to repair the nation’s broken health care system, removing Washington from the equation and putting control back where it belongs: with patients, their families and their doctors,” Enzi, chairman of the Senate Budget Committee, said in a statement.

Enzi and other leaders of the Republican-controlled Congress are relying on a parliamentary maneuver known as “budget reconciliation” to dismantle the law because it avoids a Senate Democrat filibuster and requires only a 51-vote majority for passage in the chamber, not the 60-vote majority.

But while Republicans desire to repeal Obamacare, they know they have to offer a replacement and it could take a long time to change everything around. They want to cause as few disruptions to the American people. Millions have opted to sign up for Obamacare, but those not involved have seen plans grow in cost, plans constantly changing, and losing doctors. Our own Kemberlee became a victim of Obamacare’s rate hikes…by 53%. As she pointed out, the AP reported about the massive hikes associated with the law:

Premiums will go up sharply next year under President Barack Obama’s health care law, and many consumers will be down to just one insurer, the administration confirmed Monday. That’s sure to stoke another “Obamacare” controversy days before a presidential election.

Before taxpayer-provided subsidies, premiums for a midlevel benchmark plan will increase an average of 25 percent across the 39 states served by the federally run online market, according to a report from the Department of Health and Human Services. Some states will see much bigger jumps, others less.

Moreover, about 1 in 5 consumers will only have plans from a single insurer to pick from, after major national carriers such as UnitedHealth Group, Humana and Aetna scaled back their roles.

“Consumers will be faced this year with not only big premium increases but also with a declining number of insurers participating, and that will lead to a tumultuous open enrollment period,” said Larry Levitt, who tracks the health care law for the nonpartisan Kaiser Family Foundation.

The vast majority of the more than 10 million customers who purchase through HealthCare.gov and its state-run counterparts do receive generous financial assistance. “Enrollment is concentrated among very low-income individuals who receive significant government subsidies to reduce premiums and cost-sharing,” said Caroline Pearson of the consulting firm Avalere Health

But an estimated 5 million to 7 million people are either not eligible for the income-based assistance, or they buy individual policies outside of the health law’s markets, where the subsidies are not available. The administration is urging the latter group to check out HealthCare.gov. The spike in premiums generally does not affect the employer-provided plans that cover most workers and their families.

In some states, the premium increases are striking. In Arizona, unsubsidized premiums for a hypothetical 27-year-old buying a benchmark “second-lowest cost silver plan” will jump by 116 percent, from $196 to $422, according to the administration report.

This is why a few Republicans have no problem moving forward with a repeal even if they do not have a replacement:

“Healthcare will be better and less expensive when ObamaCare is repealed,” said Rep. Jim Jordan (R-Ohio), head of the conservative Freedom Caucus. “I believe that.”

As satisfying as it is to put our thumbs in Obama’s eye, executive orders should be used carefully and lightly even by Trump. You can’t let yourself stoop to the bad guy’s level. For the same reason we signed the Geneva Convention and don’t shoot at enemy pilots who’ve bailed out, successive presidents shouldn’t just resort to executive action to get what they want. You’ll become the very person you supposedly were fighting against.

Major pieces of this legislation were left to the complete discretion of the Executive Branch.

Agree that any executive orders or cabinet-level actions done by Obama should be undone by Trump in the same manner. But any laws by Congress should follow the Constitutionally-mandated process. And anything new should follow the proper route as well.

I think your concern is misplaced, to the extent that the executive actions are designed to bridge us from the status quo to the new reality. Executive actions that self-terminate as a result of permanent legislation are the least invasive.

“Trump Plans to Use Executive Action to Repeal Obamacare”

“The House Republicans want to have the bill on Trump’s desk by February 20.”

Which is it? Following constitutional legal process or abusing EO just like Jugears?

Thankfully, so much of Obamacare is written as executive regulations.

So all the mandated abortion fees that sixty-year-old men who will never get an abortion have to pay, all those are regulations, not law. All the lines that were drawn to make a plan a ‘silver plan’ and thus save you from the tax penalty, all that’s up in the air.

All those rules that disqualify catastrophic healthcare plans, or ‘mini-med’ plans suitable for part time workers, those can be removed with the stroke of a pen.

Thank you for the detailed explanation. I was quite sure Trump would follow the constitution.

Good points. Then they need to follow up with repealing the law, so that the repugnant administrative state cannot take over again the next time a Dim becomes POTUS.

Yes. One rumor I heard is that they will repeal the law, effective in three years. Then they work on a replacement that keeps the good parts and unleashes more free market actions and allows selling across state lines…

while the Secretary of Health and Human Services dismantles the bad parts of Obamacare and uses the massive regulatory power to shift gradually to the new solution.

It isn’t just Obamacare plans that are impacted. Corporate plans are required to mirror the O’care plans to a large degree. In my plan, new for 2017, there is no limit to the amount that insurance will pay out for transgender medical procedures (after copay) for any of the plans from any of the five providers available. My deductible is $6,000, and I have the platinum level plan. You don’t want to know what the premiums are. I’m paying for discretionary procedures for others, akin to cosmetic surgery. My wife and I have significant medical expenses annually along with my four kids, but even with that, it doesn’t feel like we’re getting our money’s worth. Don’t be fooled into thinking that ObamaCare doesn’t impact everyone.

“The truth is that all Obamacare plans are nothing but catastrophic plans.”

I don’t know that all are but most are.

Any doctor visit is out of pocket.

Wow. Those are amazing numbers. Trump’s health savings accounts backed up by a true low cost catastrophic plan will be great for you.

Is that an individual or group plan?

Until Obamacare I had insurance through the company, even though I was the only one (partner has it through working wife). Very high priced then as anytime you have less than 10 employee’s it is/was expensive. Obamacare brought the price down a bit originally, but of course the plan was poor. I actually prefer a catastrophic plan, but of course cannot get it. That’s what we really have, but at the price of a normal plan.

Not many people realize just how high the cost of self employment really is. We don’t hire but do have 1099 people at times. The cost of hiring a single person is so high it cannot be justified. I’d love to have two…

Medical is my second biggest expense, after taxes…

Need to eliminate the mandate and the tax fine penalty “shared responsibilty” crap.

Amen. It’s a tax on the middle class that needs to go away. Obama “waived” it at his discretion, ergo Trump can waive it permanently until the law is repealed.

The true scam of all this is that Obama Care gives people health care. Not so. It forces people to buy insurance. Many health care providers — actual doctors and clinics and hospitals — often do not accept this insurance as payment as it does not cover the cost of the services. So one ends up with insurance, but still no care.

Try this test: call your doctor’s office and ask for an appointment for some situation going on right now… like flu, or a sprained wrist… nothing life-threatening. If you get an appointment it will be days and/or weeks into the future, or you will be referred to the emergency room. And that ER visit will probably not be covered, once it is decided that the original event was not what they call an emergency, so bring your checkbook.

My auto mechanic has his prices on the wall and tells me if there is the potential for additional cost. My veterinarian can give me an estimate on care for the dog or the horses… I am free to seek other providers if I don’t like those prices. Try that at you doctor’s office or local hospital.

On another forum, I asked the question “Why can’t insurance companies sell policies across state lines.” The answer I got was the McCarran–Ferguson Act

The McCarran–Ferguson Act, 15 U.S.C. §§ 1011-1015, also known as Public Law 15, is a United States federal law that exempts the business of insurance from most federal regulation, including federal antitrust laws to a limited extent. The McCarran–Ferguson Act was passed by the 79th Congress in 1945 after the Supreme Court ruled in United States v. South-Eastern Underwriters Association that the federal government could regulate insurance companies under the authority of the Commerce Clause in the U.S. Constitution.

So Congress did it to us. Come to find out, the House has voted many times to repeal the McCarran–Ferguson Act with regard to health insurance. but the bill always dies in the Senate.

Substitute pro American non communist for white in your little scribe. Then you’ll have something accurate.

Only a simpleton counts up executive orders without considering their scope and purpose. There is a difference between naming a post office and unconstitutional usurpation of congressional powers.

Sucks to be you.

Read about Obama’s abuse of executive memoranda as a surrogate for EOs then come back with real numbers, low info shill.

Executive memoranda are worse than EOs because they don’t even have to be made public…we can’t even count all of Barry’s hidden decrees!