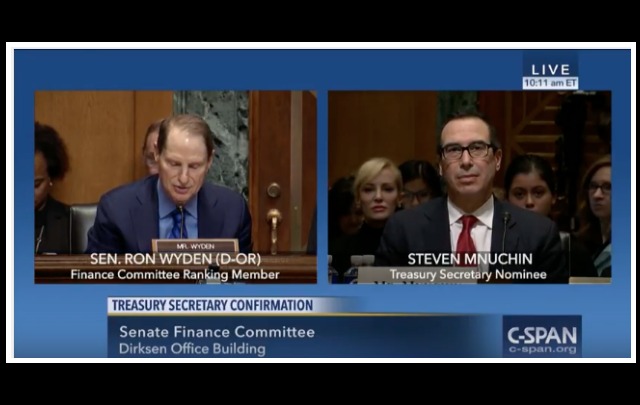 Treasury Secretary nominee Steven Mnuchin faced the Senate Finance Committee on Thursday for his confirmation hearing, answering questions about the dollar and his own investments.

Mnuchin worked at Goldman Sachs for 17 years before he “became an investor at ESL Investments and then with his own fund Dune Capital Management.” He rescued IndyMac Bank for $1.6 million, renaming it to OneWest. The project succeeded for Mnuchin, who sold it to CIT Group for $3.4 billion in 2015. However, the project faced scrutiny over its foreclosure practices, which Mnuchin defended during his testimony:

He further argued OneWest was an advocate for struggling homeowners, working with bond trusts to gain freedom to modify loans and proposing regulatory changes with the Department of Housing and Urban Development to avert foreclosure on elderly homeowners. About Financial Freedom, Mnuchin said the operation was built under the previous management and it was dismantled during his tenure.

The investments also led to a fight with Sen. Ron Wyden (D-OR), who “criticized Mnuchin over his use of a ‘dynasty trust’ which ‘shields tens of millions of dollars from taxes.'” The Democrats then passed around a memo that stated “Mnuchin failed to initially disclose close to $100 million of his assets on disclosure documents sent to the Senate Finance Committee.” It also said that he did not “mention his role as a director for an investment fund located in a tax haven.” Due to these exclusions, the Democrats said he should not have the job:

“There’s no clearer example than Mr. Mnuchin’s hedge fund setting up outposts in Anguilla and the Cayman Islands, an action that can be explained only by the islands’ zero percent tax rate,” Wyden said. “… Millions of dollars in profits from Hollywood exports like the movie ‘Avatar’ were funneled to an offshore web of entities and investors.”

“The Treasury secretary ought to be somebody who works on behalf of all Americans, including those who are still waiting for the economic recovery to show up in their communities,” Wyden said. “When I look at Mr. Mnuchin’s background, it’s a stretch to find evidence he’d be that kind of Treasury secretary.”

Wyden also turned his attention to Mnuchin and accused the Wall Street banker of putting “more vulnerable people on the street faster than just about anybody else” during widespread foreclosures on homeowners across the country.

“I, like all other hedge funds and many, many private equity funds, set up offshore entities that are primarily intended” to facilitate investments by pension funds and others, Mnuchin responded.

“In no way did I use them whatsoever to avoid any U.S. taxes. They were merely as an accommodation to pension funds and nonprofit institutions and a small number of foreign investors,” he added. “As Treasury secretary … I would look at these rules.”

Turning to finances, Mnuchin told the committee he wants to “raise the debt ceiling sooner rather than later” while making America’s debt a priority. He insisted that the country “has the obligation to honor its debt.”

Mnuchin believes he can lower taxes:

“We will work diligently to limit regulations, lower taxes on hardworking Americans and small businesses, and get the engine of economic growth firing on all cylinders once again,” Mnuchin said. Whether he will give further insight into his plans for a prospective repatriation holiday, or the extent corporate rate cuts, are of great interest.

In commentary, Mnuchin said he believes the Trump administration will bring trillions of dollars in corporate cash onshore, where it can be reinvested and overall rates can be lowered. Presumably, there will also be a coincident growth bump. Mnuchin said he believes the administration will come up with a plan that doesn’t increase the deficit. “I want to make sure tax reform doesn’t result in a widening of the deficit,” Mnuchin said, without citing specifics.

AFAIK, no dog caught the pony in this installment of the dog and pony show. Another nothingburger, just like the rest.

I wonder if it’s starting to dawn on dems that they aren’t going to be able to block any of Trump’s nominees. Perry’s nomination turned into him and Franken cracking wise about SNL. Which is probably going to go down as the only memorable moment in this entire process.

Mr. Chairman, we do not have a crisis at Freddie Mac, and in particular at Fannie Mae
— Maxine Waters

They want to have their baby and abort it, too.

Oh, Ron Wyden. He was the one who had no idea what a gallon of milk or a loaf of bread cost when he first ran for Congress. Neither could he point to Kosovo on a map while the U.S was at war there. Funny how you can’t find that information via a Google search…

It will take a while for them to remove all the money circulating that has “Tax Cheat” written over Turbo Tax Timmy Geitner’s name.