“It was a successful meeting and he seemed really sincere.” 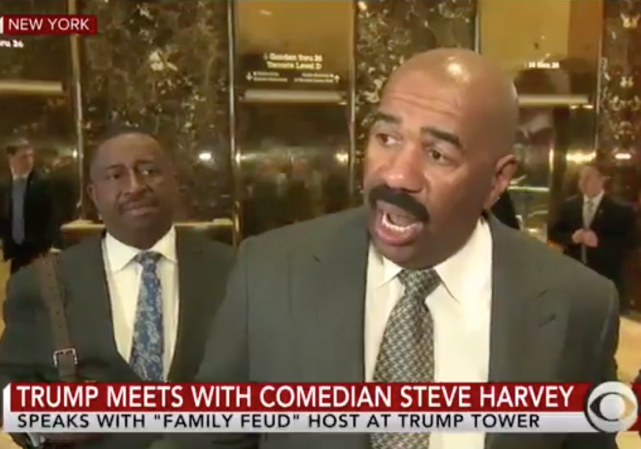 Comedian Steve Harvey had a meeting at Trump Tower Friday. There, Harvey met with President-elect Trump and Head of Housing and Urban Development, Dr. Ben Carson.

Harvey described Trump as “sincere” and that his only agenda is to work towards positive change in inner cities. Both Chicago and Detroit will be targeted. But Harvey wants to help young people out in inner cities across the country.

.@IAmSteveHarvey: "We're going to team up and see if we can bring about some positive change in the inner cities." pic.twitter.com/9fCfSg4abj

.@IAmSteveHarvey: "It's an honor to be invited to talk & I think that's the only way we're going to unify our country – we've got to talk." pic.twitter.com/DQHOa87Tk7

.@IAmSteveHarvey: "We talked about golf. We laughed about my score in golf, his score in golf." pic.twitter.com/D8UwuGFUme

Harvey supported President Obama in both of his elections.

I find great encouragement that unlike the last administration, Trump is actively seeking friends from across the political spectrum. Not only is it good coalition building, it signals an administration that at least on the onset, appears to be more interested in the goal and less interested in partisanship.

What’s good about Steve Harvey is he has had real ups and downs in his life but he’s never embarrassed or ashamed to talk about his failures. He sees the value of the family unit and faith so I hope he works to help bring those things back to inner city families.

Perhaps he and others might become the new black leaders instead of the victim hustlers.Let’s hope.

I have always liked and been impressed by Steve Harvey, he seems like the kind of guy who, figuratively speaking, would have a beer and talk with anyone. Add that he has made something of himself and is just funny a true comedian. It’s good to see him involved.

I’m hopeful that they’ll recognize that current programs provide incentives which destroy the family, and that is the heart, the absolute heart, of the problem.

This is less of a stretch than you would originally think.

Wow. My comment seems to have been deleted. Hey, guys, this is why we don’t have a discussion on race. No matter how well expressed or put, anyone who addresses racial inequality gets their comments taken down. I will be leaving this blog now, since they are so upset that their you tube videos were taken down. Too bad. I enjoyed many of the articles and comments.

Yea, BS, the don’t delete comments here and you are lying through your teeth.

Not for us apparently.

I have worked several ministries that involved going into the inner city and trying to help the people there. I would collect, find, or be given bicycles that ranged from being in decent shape to being totally trashed (which was the condition for the vast majority) and turn them into nice decent bikes that kids could use. I averaged around 75-90 bikes a year (until my back problems forced me to stop) and the overwhelming majority were given to black families living in the inner city. My experience is based on the time I spent working there trying to help. That experience ranged from tearful mothers grateful for getting a bike for their child to being spat upon for not having the color they wanted (or other trivial reasons), being threatened with bodily harmed such that we required a security presence, to being cursed out for not giving one person multiple bikes so they could go off and sell them.
>
What I discovered was the obvious which was that there were many wonderful people living in the inner city. They care deeply about their children and tried as hard as they could to provide a good home life for them. These people were almost exclusively mothers and churchmen. Huge numbers, however, had no interest in working or even finding work and demanded that everything be given to them for they deserved it. Many were on drugs and a terrifyingly large number were ready to become violent at the most minor issue. Cursing, disrespect, screaming and other such behavior was very common as were the excuses as to why nothing was their own fault. By far and away the most common person you saw there was the victim who was demanding compensation for their victimhood. When we went to some horribly poor areas of Appalachia we saw little to none of this.
>
Based on my experience, more money is not the answer. The country and individual citizens have spent countless hours and trillions of dollars trying to fix the inner city problem and it has not worked. Why is it that so many assume that even more money will make a difference?
>
Based on my experience, we could spend every penny in America on the inner city for decades and their problems would not go away. The reason for this is that the problem is not money, it is not white privilege, it is not racism, and it is not any of the other multitude of excuses typically used. The problem is the attitude of the people living there. Until people learn that they need to pay attention in school and become educated, that they need to learn how to be respectful to others in order to earn the respect of others, until they learn that drugs and violence are not the answer, until they learn that had work is the only real solution, until they start taking personal responsibility for their own actions, and until they learn about commitment to the family so that they stay home to become the role models teaching their children these valuable lessons, nothing will change.
>
It is time we learned from the Jewish people. Of all the people on Earth, no one has been persecuted like the Jews. Repeatedly, throughout history the Jewish people have been enslaved, had their homes and and businesses taken from them, and have been butchered like no one ever before. The Jewish people realized that they had a choice. They could claim victimhood and wallow in self pity or they could do something about it. They chose the latter. Because of this, their culture is one of the few where education and making the very most of yourself is a basic tenet. Instead of claiming to be the perpetual victim, the Jewish people worked hard to become the most educated, the hardest working, the most responsible people they could become. They focused on the family so their children had positive role models and so they could support each other in every way possible.
>
Today, when you think of the Jewish people you think of doctors, lawyers, successful businessmen, and so forth. When you think of the black community you think of other things. Clearly the Jewish model works while the paradigm used by the black community has been an abysmal failure. Despite all of this we continue to think that throwing more money at the problem of the black community will fix it when obviously it will not. When are we going to come to the realization that this paradigm is not working and when will the black community will understand that this is their problem and that they need to start working internally and getting results there before anymore money will accomplish anything?

This is most encouraging. It has been my hope Trump would revitalize cities with DeVos in education, Carson in housing and now Harvey coming in it looks like something is in development. It would make America great again if our cities could be made into great places to live. I mean by revitalization and not gentrification.

So … what are they actually talking about here, just more waiting around for something magical to filter down from the government? You know, the same old crapola which has racked up such sterling success since the Johnson era.

It’s hard to believe that the way to break the corrosive cycle of failure and dependence is to add even more dependence. And that’s what “helping young people out in inner cities” sure sounds like.

I have no problem at all with Steve Harvey, but I suspect he’s stuck with the same ideological blinders here as pretty much everyone else.

I share your concern. The dependence upon government handouts is corrosive and has destroyed the black family and is working its wonders on everyone else as well.

How do you roll it back? After 50+ years it’s not going to be easy. Nor quick. A good start – create opportunity for the people trapped in the cycle. From there you might be able to begin the long process of ending dependency without mayhem. While I’m not certain at all what Trump has in mind, from what has been said I think this is the basic idea.