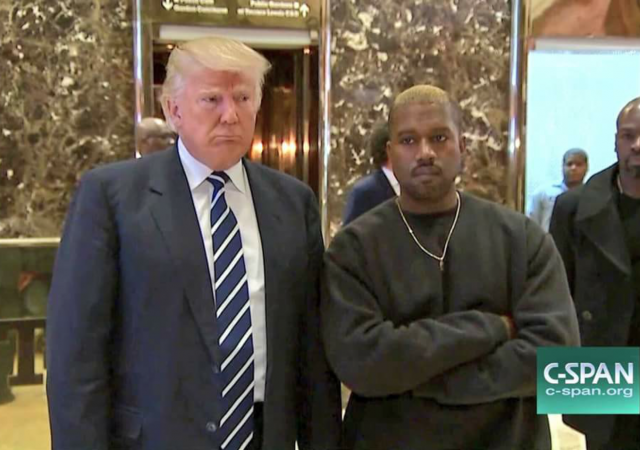 Trump said there were “just friends” and that they’ve “known each other a long time.” When asked what their meeting entailed, Trump said “life”.

West answered no questions, but smiled and said he wanted to take pictures.

The “Jesus Walks” rapper met with Trump to discuss becoming an “ambassador of sorts,” a source close to West tells E! News. The source adds that Trump is interested in getting West involved in an “entrepreneurial leadership role.”

As for how the meeting came about, the insider tells us that Trump’s team reached out to West. “Trump thinks he’s a great role model when it comes to business,” the insider adds.

E! News has reached out to Trump’s team for comment.

West’s meeting comes nearly two weeks after being released from the hospital for exhaustion. His New York City trip also included a visit to an apartment building in the Financial District, as well as some time at a recording studio. The Life of Pablo musician arrived at Trump Tower around 9 a.m. Tuesday morning, spending only a brief amount of time with the president-elect before the two returned to the lobby to answer questions.

West is known for his antics and also for his reality TV star wife, Kim Kardashian. As much as I abhor the idea of a Hollywood presidency, there’s something rather brilliant about publicly working with entertainment influencers, particularly if Trump is serious about his “healing the nation” talk. Better to have allies on the Left Coast than enemies.

There are jobs available for Kanye if he wants to serve his country. Jobs at the National Endowment for the arts, Jobs involving outreach to the black community, and music gigs at the inauguration.

He would make a great clown,

Nice of Kanye to dress up for the occasion. On the other hand, if he asked Trump for advice on a pending divorce filing, he’d gain a bit of my respect.