Senate Passes Waiver to Confirm Mattis as Secretary of Defense

Senate Passes Waiver to Confirm Mattis as Secretary of Defense 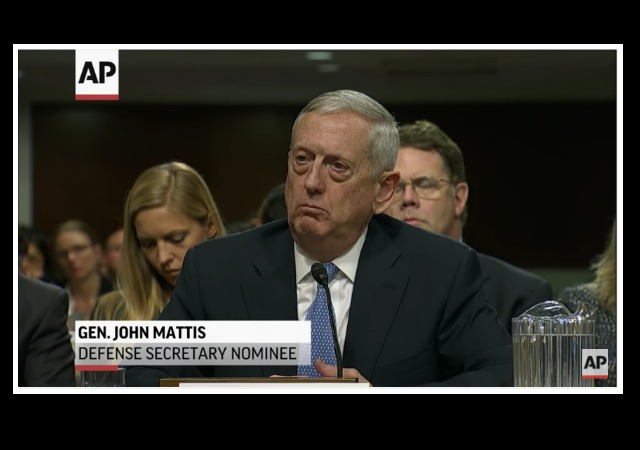 The Senate Armed Services Committee passed a waiver by a vote of 24-3 allowing Gen. James Mattis to serve as President-elect Donald Trump’s Secretary of Defense. Becuase he retired from the Marine Corps in 2013, he needed the waiver to bypass a rule stating an individual must be out of the service for seven years before serving a new appointment.

Only Democrats Kirsten Gillibrand, Richard Blumenthal, and Elizabeth Warren voted against the waiver. Sen. John McCain (R-AZ) said the committee should pass the legislation “because the U.S. is at war and the Trump administration needs Mattis as quickly as possible.”

The Democrats had concerns about “eroding the principle of civilian control of the military.” Blumenthal expressed worry “by the precedent” of Mattis “assuming this office would set.” He told Mattis, though, that he is one of the few who deserves the exemption. Yet, he still voted against Mattis.

“Features of the times, features of frankly my concerns about the incoming administration, and features in your background I think make this an opportune moment to make an exception,” Kaine said.

Trump has praised Russian President Vladimir Putin in the past and pushed for closer ties. But Mattis became the latest Cabinet nominee to break with Trump. Mattis believes Russia is a threat to America. He insisted that the U.S. must be prepared for confrontations with Russia, especially since Putin wants to disrupt NATO:

“Since Yalta, we have a long list of times we’ve tried to engage positively with Russia. We have a relatively short list of successes in that regard,” Mattis said, referring to the Yalta conference at the close of World War II. “The most important thing is that we recognize the reality of what we deal with Mr. Putin and we recognize that he is trying to break the North Atlantic alliance, and that we take the steps . . . to defend ourselves where we must.”

Asked during a confirmation hearing how he viewed the strains facing the post-war world order, Mattis replied: “I think it’s under the biggest attack since World War II sir, and that’s from Russia, from terrorist groups and with what China is doing in the South China Sea.”

“Russia is raising grave concerns on several fronts and China is shredding trust along its periphery,” Mattis told the Senate Armed Services Committee.

China has raised tensions in the South China Sea due to its military presence and building of manmade islands. Mattis wants America to “try to engage and collaborate with China where possible,” but we must also prepare “to confront inappropriate behavior if China chooses to act contrary to our interests.”

Mattis also believes that ISIS has shown itself as a major threat to the post-war world order. He wants America to be more aggressive towards the terrorist group:

When asked whether the US can confront the terror group in its capital of Raqqa, Mattis said he believed the US could, but he added that the anti-ISIS strategy needed to be reviewed and “energized on a more aggressive timeline.”

He told members that “we have to deliver a very hard blow against ISIS in the Middle East so there is no sense of invulnerability or invincibility there.” For the US, according to Mattis, that means attacking ISIS’ main areas of strength so they cannot pop up elsewhere.

The general found some faults with the Iran Deal, but will keep it intact believing America should keep her word. He admitted, though, he would not have signed it.

Mattis stressed the importance of maintaining America’s partnership with NATO and other allies like South Korea and Japan. Trump has shown disdain for these partnerships unless the countries can add more to defense spending. However, Mattis told the committee that “Trump has shown himself to be open and inquisitive while discussing NATO with him.”

Sen. Claire McCaskill and Gillabrand used the hearing to discuss social issues with Mattis, including females in combat and LGBT in the military. Mattis scoffed at the possibility of even bringing back the Don’t Ask, Don’t Tell policy. One senator asked him about protections for LGBT service members and Mattis shut down the issue with one simple answer:

“Frankly, senator, I’ve never cared about two consenting adults and who they go to bed with.”

When the senators brought up females in combat positions, he said he had no problem assigning them in any position if they meet the standards:

Sen. Kirsten Gillibrand (D-N.Y.), who has been a strong supporter of gender integration, pointed to previous comments from Mattis as a retired general and questioned whether he opposed women serving in all combat roles. Mattis responded that he was not a government official at the time, and was not coming in with any specific agenda.

“If someone brings me a problem, I will look at it. But I’m not coming in looking for problems,” he said, adding that he had numerous women who served in his units during the invasion of Iraq in 2003.

Mattis broke from Trump and other Republicans when he told the committee America “should continue treating Tel Aviv as Israel’s capitol.” Trump made a pledge to move the U.S. embassy to Jerusalem, but Mattis would like to “stick with the current US policy.” He explained he calls Tel Aviv the capitol because “that’s where all the government people are.”

Exactly as he should.

Anything that causes a democrat “concern” is fine by me.

The general found some faults with the Iran Deal, but will keep it intact believing America should keep her word.

But America has not given her word. To do that would require the consent of 2/3 of the senate, which the outgoing president didn’t even bother asking for because he knew he couldn’t get it. Instead he gave his personal word, which binds only him. Why does Mattis feel bound to continue what he believes to be a bad deal? Someone should explain this to him.

True, but it’s not really his place to drive those types of policy decisions. That is on Trump and the Congress, although Congress already rolled over and piddled on the rug the first time.

What’s not his place to say that america has given her word, when she hasn’t.

and no, Congress did not roll over, the R majority did everything possible to pass a law forbidding the deal, but couldn’t get enough Ds to join them in overriding a veto. So 0bama had the authority to make this deal privately and carry it out; he did not have the authority to bind his successor to the same deal.

There is a major factual error in Mattis’s testimony. The Government of Israel is in Jerusalem.

It’s the military establishment that is primarily in Tel Aviv. Which is who he interacted with.

He explained he calls Tel Aviv the capitol because “that’s where all the government people are.”

Oh, and you misspelled “capital”. A capitol is (a) a building, not a city, and (b) doesn’t exist anywhere outside the USA.

The headline says the senate passed the waiver, but the article says the Armed Services Committee passed it, which means merely that it recommended its passage to the senate. The senate hasn’t passed anything yet.

Thank you. That’s the information that should have been in the article to justify the headline.

“Frankly, senator, I’ve never cared about two consenting adults and who they go to bed with.”

A total non-answer to the question posed. And a Senator let him get away with it? Maybe those guys really are as dumb as we think they are.

The general found some faults with the Iran Deal, but will keep it intact believing America should keep her word.

And I am majorly hoping that this was a gross misunderstanding of whatever the General said. If not, he dropped a huge clanger here. Maybe even a deal-breaker.

McCain should referred to as (Rino-Az) McCain. This is the first things he’s conceded to Trump. I guess now going to try and keeps his job?

McAnus has nothing to fear from Mr. Establishment, who DID endorse him, after all…

I don’t know who will prevail in that conflict, but I know who I’d back.