Response of San Diegans ranges from meh to heartbreak. 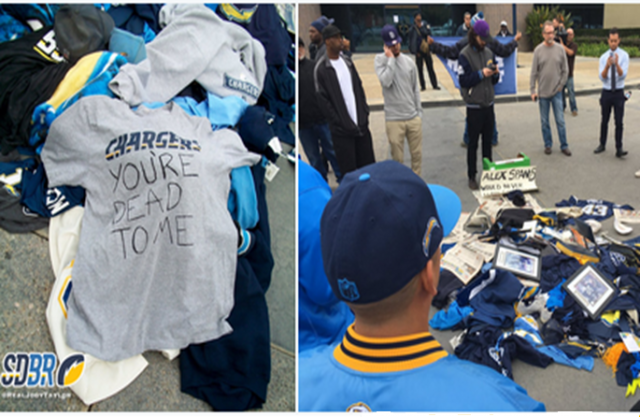 While I am not a fan of football, unlike Meryl Steep, I can respect those who love the game.

So, when it came to voting whether to approve a tax hike to fund a new stadium for the San Diego Chargers last November, I asked the San Diego team of independent conservative bloggers for their opinions. They all said, “No!”.

As W.C Varones noted, “I am so sick of the Chargers and the Padres holding up the taxpayers for subsidies and then fielding horrible teams.”

Now, the owners of our football team have formally announced the move to Los Angeles that they have been threatening for years.

Chargers chairman Dean Spanos was in no mood to reflect Thursday morning after officially announcing his plans to move the franchise to Los Angeles after 56 seasons as San Diego’s pro football team.

…The Chargers quickly changed their Twitter name and showed off a new Dodgers-like logo, although the team is continuing to use its traditional lightning logo for now.

To say that city officials were unhappy would be an understatement. Their frustration at the Spanos-style of negotiation was evident at the press conference discussing the move.

Political leaders in San Diego disputed Goodell’s claim in a news conference. Mayor Kevin Faulconer said the Chargers rejected every offer, including one made just a few weeks ago.

“At the end of the day, the Chargers wanted a lot more taxpayer money than we could ever agree to,” Faulconer said.

“We could not support a deal that is not in the best interest of San Diego,” the mayor said. “Dean Spanos made a bad decision and he will regret it. San Diego didn’t lose the Chargers. The Chargers just lost San Diego.”

Other area officials were harsher in their assessments.

City Councilman Scott Sherman said the ownership was a problem throughout the whole process, and they never gave a straight answer to anything.

It’s good to see California politicians who care about how they spend taxpayer dollars. They are so rare, I am recommending that they be formally placed on the Endangered Species list.

How do San Diegans feel about the development? For some of us, it’s a lot of MEH, as The Liberator Today explains:

The impending move of the Chargers to Los Angeles has left with me with a so what feeling. I lost emotional connection with them a few years back. I had no intention of supporting another hold-up of the city finances.

The only silver lining is that maybe we will have incentive to figure out how to make stadiums profitable without football teams. If that problem could be solved, we could build stadiums and not get soaked on the deal.

However, some fans were devastated.

Some were in tears, including grown men.

And then, one by one, fans began throwing down their Chargers jerseys, t-shirts and hats, right in front of the building.

Many fans are even getting their logo tattoos removed!

Additionally, the Chargers should not expect a warm welcome in LA.

The news broke Wednesday that Chargers owner Dean Spanos has informed NFL Commissioner Roger Goodell he is moving the team to Los Angeles, which is pretty much dreadful news for Los Angeles.

Wow, just what we need, the return of a professional sports team with no buzz, no tradition, few local fans north of south Orange County, limited success, and an owner who just stole them away from a place where they were loved unconditionally for 56 years.

The NFL has had quite a year, between foundering ratings and several team relocations. I’m just hoping the Super Bowl ads are good, that there are no costume malfunctions on the performers, and that the Padres have a good year.

There is a lot of increased revenue for the owners of the sports teams a provided by the taxpayer funded sports stadiums. The obvious crony capitalism

The NFL has forgotten why it became such a powerful brand, and now every decision they make is just short sighted monetization of their current financial position.

Who will be added to their fanbase with the addition of another team to L.A.? No one. How many fans will be lost? An entire cities worth. But the leadership couldn’t care less. The day will come when they do care, but then it will be too late.

Not just now. I used to be a diehard Raiders fan decades ago. My dad and I used to go to the Stadium and watch a game every time we could. Then Al Davis taught me it’s just a business and moved the Raiders to L.A.

It’s really hard for me to put a lot of time, energy, and emotion into something that’s just a business.

Billionaires doing shakedowns of limited taxpayer funds whilst increasing the price of tickets to pay for millionaire players.

Look on the bright side, San Diego. Now you’re eligible to get a professional football team.

The citizens of San Diego will now wake up and realize that anyone who “Roots” for any NFL team is only supporting the owner’s bank account. It’s like having Coca Cola as your home team and paying good money for them to insult you every Sunday with anti-patriotic nonsense and over priced tickets. What’s even worse are the fools that want the taxpayers to pay for a new stadium! The billionaires who own these teams should have to build and pay for their own stadiums. I believe the NFL is on its way down and after this season many sports fans realize that we have been played for chumps all along!

And then there’s that odd little team up in Green Bay that’s been a publicly-owned, non-profit corporation since the early 1920s. Governed by a Board of Directors that sits gratis with 300,000+ stockholders that fill that stadium for their stockholder meetings. Stock certificates are framed and hang on the walls right next to their family portraits. Tens of thousands of names are on a waiting list for season tickets that become available only if they aren’t willed after a ticket holder’s death. The world will end with the Packers still in Green Bay. Oddballs, for sure.

I grew up in Seattle, but loved the Packers just for Bart Starr!

The Green Bay Packers fans are fortunate. But I’d feel like a sucker if I paid what every other NFL team charges, knowing that like Al Davis they all look at me like a sucker, that my money would be going to their leftist political causes. Men in the ladies room, anyone? Gay pride night, anyone? Ungrateful, anti-American millionaires’ like Colin Kaepernick’s salaries, anyone?

I think it was the KC Chiefs who came running out of the tunnel in the “hands up, don’t shoot” in solidarity with Michael Brown and #BlackLivesMatter crowd. I’m not sure as I only saw that portion of the spectacle the NFL calls a football game on the news. Like anyone should care what these overpaid idiots think. Talk about “fake news.”

Speaking of ungrateful millionaires every time the NFL players (and other pro athletes) strike they use the language of management and labor. As if a group of people who play a game for a living, a great many of whom make more in a year than I’ll make in my entire life, are going to manipulate any sympathy from me by trying to associate themselves with people who risk their lives in coal mines.

I’m not going to waste my money on this.

NFL bubble is about to burst.

The NFL should know from experience that Los Angeles won’t support their teams. These guys will be moving again within 10 years.

Wasn’t there another team that was headed to LA ?

Full disclosure: I was on the executive committee of the Tiger Stadium Fan Club, and I learned a lot more about this sort of thing than I wanted to know.

There have been a number of studies on the economic impact of stadium and arena buildings. As far as I know, the broad consensus is that they develop the wallets of the owners, probably some politicians, and for a couple of years some construction companies and building trades workers.

This is crony capitalism, pure and simple, and both parties do it. The taxpayers wind up paying for something many of them cannot afford to go to.

So telling that Spanos (Charger owner) would rather pay the $650 million relocation fee to the NFL than pony up that much for a stadium to remain in SD. F*** him and his phony empathy for the fans. The franchise is worth an extra billion $$ in LA (allegedly). That explains it all. The multi-billionaire is richer this morning.

You are so right.

Jerry Jones of the Cowboys gets pilloried all the time but he put in $650,000,000.00 towards building the best stadium in the NFL. And it is a huge success.

If Spanos put in the same $650 million towards a stadium, he would have accomplished so much more. Instead he goes to LA where his team will be ignored and unloved and unwatched.

NFL bubble is about to burst……I mean why would a team, much less a second team move to LA, and Goodell wants to get a team in London…….

anyone remember what happened to NASCAR?

A business that generates billions and pays some of its players salaries in the tens of millions should be forced to live within its means, without cutting sweetheart deals or blackmailing their host cities.