The Nice terror attack shocked the world, but car rammings have been a central tactic in the latest Palestinian terror wave 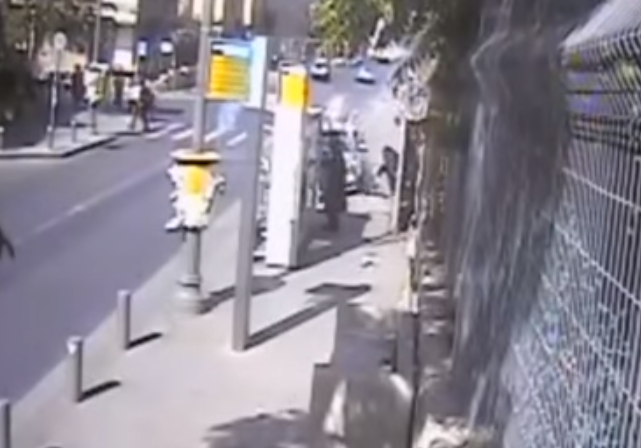 The use of a truck as a terror weapon in Nice has shocked so many people not only because of the death toll, but also because the terrorist turned an ordinary device into a weapon.

That was not the first time in France that a vehicle has been used in such a way. But in Israel the use of cars as weapons became commonplace since October 2015, when the current wave of Palestinian terror started. While usually referred to as the Knife or Stabbing Intifada, in fact shootings and car rammings have been used with great frequency.

The car ramming terror was most intense in the last three months of 2015, with high density locations like bus stops a target. This video, in which a bus stop was rammed and the terrorist got out with a meat cleaver and attacked one of the injured people before being shot, received a lot of attention, including at Legal Insurrection:

Palestinian incitement to kill Israelis in car attacks is all over the Arabic media for months… pic.twitter.com/2kXtPkKb2A

Israel responded by fortifying bus stops and taking more aggressive measures towards rapidly approaching vehicles. That may be one of the reasons there Israeli death toll from car rammings has been lower than in Nice — also checkpoints and the security barrier help screen potential trouble or keep it on the other side.

The Israeli Ministry of Foreign Affairs compiled a list of Palestinian terror attacks since early October 2015, generally considered the start of the current wave of terror, through July 11, 2016. I pulled the attacks involving car rammings, and added video where I could find it.

October 13 – Makor Baruch, a religious neighborhood. Rabbi Yeshayahu Krishevsky, 59, of Jerusalem was killed and five wounded. The terrorist, who was apprehended, is a resident of the Jabel Mukaber neighborhood who holds Israeli citizenship, was an employee of Israeli phone company Bezeq, and was using a company car to commit the attack.

October 21 – Ofra (north of Jerusalem): An Israeli policeman was mildly injured in an apparent car-ramming attack when the driver crashed into a checkpoint, ignoring police warnings to stop. The driver fled.

Beit Ummar (north of Hebron): Five soldiers injured – after their vehicle was stoned, the soldiers got out to arrest the stone-throwers and were rammed by a Palestinian car. The attacking driver was shot and seriously wounded.

November 4 – Halhoul junction (north of Hebron): Three Border Policemen were wounded, one criticallly, in car-ramming attack. The terrorist was shot and killed by security forces. Border Policeman St.-Sgt. Benjamin Yakubovich, 19, of Kiryat Ata, critically wounded in the attack, died of his wounds on November 8.

November 8 – Tapuah Junction (Samaria): Four Israelis were wounded, two seriously, in a car-ramming terror attack directed at a group of people at a hithchhiking stop. The attacker was shot and killed by security forces.

November 22 – Kfar Adumim junction (east of Jerusalem): A Palestinian taxi driver tried to ram his car into a group of Israeli pedestrians. After failing to hit anybody, he got out of the car and attacked them with a knife. One man slightly wounded. The attacker was shot and killed.

November 23 – Northern Samaria: A youth (18) was lightly wounded in a ramming attack near Shavei Shomron.

November 24 – Tapuach Junction (northern West Bank): A Palestinian rammed a car into security forces, wounding three IDF soldiers and a Border Policeman who were at the junction assessing additional security measures to prevent terror attacks. The assailant was shot and apprehended.

Beit Ummar: Six soldiers were lightly to moderately wounded when a Palestinian rammed his car into IDF troops at the entrance to the Beit Ummar refugee camp, south of the Gush Etzion junction.

December 4 – Ofra (northwest of Jerusalem): Two IDF soldiers were injured in a ramming attack. The Palestinian driver was shot and killed by soldiers on the scene.

December 6 – Jerusalem, Romema neighborhood: Three people were wounded in a car-ramming and stabbing attack. After hitting two people with his car, the assailant exited the vehicle and stabbed a pedestrian. The assailant was shot and killed by an IDF soldier at the scene.

December 10 – Between Beit Aryeh community and Luban village in the Benyamin region of Samaria: Ramming attack injured 4 soldiers, 2 lightly, one moderately and one seriously (20). The terrorist (a member of Hamas) was apprehended after a search.

December 14 – Jerusalem: Eleven to fourteen people were injured in a vehicular ramming attack at a bus stop opposite the Calatrava Bridge at the entrance to Jerusalem, around 3 pm on Monday afternoon. The injured include two moderately, a 15-month-old baby who was seriously injured, and the baby’s mother. The terrorist (21, originally from the Beit Hanina neighborhood in Jerusalem, currently residing in Hebron) was shot and killed by security forces.

December 25 – Silwad, near Ofra in the Benjamin region of Samaria: Attempted ramming attack by an Arab woman (40). The driver was shot and killed on site.

March 14 – Elias Junction (near Kiryat Arba): Two Palestinians attempted a car ramming attack, later opening fire on civilians and soldiers standing in a nearby bus stop, near the entrance to Kiryat Arba. Both assailants were killed by IDF soldiers. A soldier was slightly wounded in the shooting. Shortly after the first incident, another vehicular attack took place at the same stop. An IDF officer was lightly wounded and two soldiers were lightly injured by shrapnel. The terrorist was shot and killed.

May 3 – Near Dolev, northwest of Jerusalem: Three IDF soldiers were injured, one critically, in a ramming attack in the Benyamin region. The attacker was shot and killed by IDF forces at the site.

24 June – Near Kiryat Arba: A female Palestinian driver rammed into a car at a hitch-hiking stop, lightly injuring two Israelis. A soldier at the scene shot and killed her.

There has been at least one more car ramming since the MFA list was compiled.

July 13 – Jerusalem Post – Security forces fired on a vehicle involved in a suspected ramming attack on them early on Wednesday in a-Ram, adjacent to Ramallah, killing one suspect and wounding a second.

I’m just waiting for the call for the ban on assault ice cream trucks, because as we all know, it’s the tool that’s responsible, not the person who uses it. /sarc

Context is important. In the abortion industry and Planned Parenthood, neither the woman, nor the abortionist, nor the cannibal, nor the scalpel are responsible for their freely taken actions.

Scalpels are the favored tool of abortionists who end over one million [wholly innocent] human lives annually in America alone. They are also the weapon of choice by Planned Parenthood et al as they channel Mengele for fun and profit.

The people are fine, its the vehicles that are committing elective abortions. We need vehicle control. Ban high mass, self-propelled steel projectiles.

That first video is unconscionable. To think a person could run a random person over then get out and hack them while getting shot and continue to hack is beyond human. You cannot deny the existence of evil (which is an absence of G-d) after watching this.