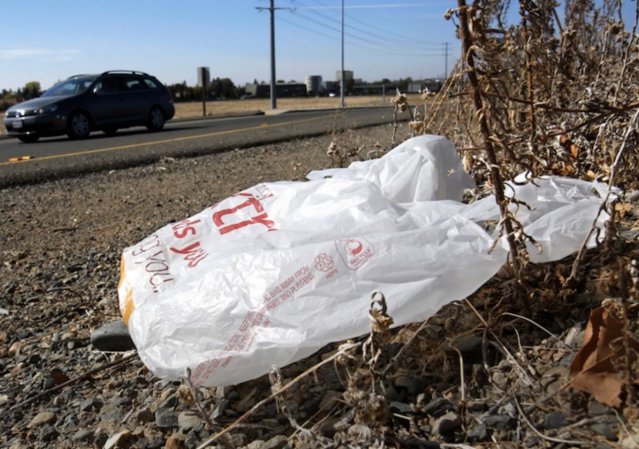 Plastic bag bans are all the rage in progressive locals like Austin and Portland, and the entire state of California, but Michigan is having none of it.

Lt. Gov. Brian Calley recently signed a bill that banned plastic bag bans, along with any local ordinance that would restrict the use of certain types of disposable containers and packaging.

Michigan Lt. Gov. Brian Calley signed the new public act into law on Wednesday, along with 11 other bills. Gov. Rick Snyder is currently on vacation out of state, local news sources reported, and Calley has the authority to sign bills into law in his absence.

The new public act prohibits local ordinances from “regulating the use, disposition, or sale of, prohibiting or restricting, or imposing any fee, charge, or tax on certain containers,” including plastic bags, as well as cups, bottles and other forms of packaging. This means individual cities and municipalities are not allowed to ban plastic bags or charge customers a fee for using them.

Bans and restrictions on the use of plastic bags are widespread in other parts of the country and around the world. The rationale is simple: Plastic bags are infamous non-biodegradable sources of pollution — although they will eventually break down into tiny pieces, scientists believe this process can take hundreds of years, or even up to a century, in landfills.

Do plastic bags really take centuries to decompose? No one knows for certain, but plenty have speculated.

In any case, the ban ban means Washtenaw County, who planned to enforce a ten cent tax on disposable plastic and paper grocery bags this year, has been pre-empted by state law.

Not all state lawmakers are thrilled with Michigan curtailing local authorities ability to nickel and dime residents:

Rep. Jeff Irwin, D-Ann Arbor, spoke in opposition to the bill on the House floor.

“This is a bill that attacks local control,” Irwin said.

The bill passed anyway, 62-46. It passed the Senate 25-12. Calley signed it on Wednesday; it’s his constitutional power to sign bills when Gov. Rick Snyder is out of the state. Snyder is out of state spending time with his family, a spokeswoman said.

The bills were championed by the Michigan Restaurant Association, which claimed a victory with the bill’s signing. It prevents chain restaurants and retailers for having to comply with a patchwork of local container ordinances, said association Vice President of Government Affairs Robert O’Meara.

“With many of our members owning and operating locations across the state, preventing a patchwork approach of additional regulations is imperative to avoid added complexities as it related to day-to-day business operations,” O’Meara said.

Well shucks, no tedious regulation that would’ve required small businesses to purchase more costly materials to satisfy lawmakers passing ordinances based on junk (or at the very least, inconclusive) science.

A win for small businesses, I say.

The Philadelphia “sugar tax” started the other day.
In some cases, the price of a bottle of soda actually doubles.
The most unfair part is that it treats diet soda (using sugar substitutes) the same, so it obviously isn’t about the health of Philadelphians .. it’s about the Benjamins

How does it treat beer?

This sounds like a great law for a state to pass.

and all the excuses to ban plastic bags are BS anyway…

leave one out in the sun for awhile and it will simply crumble away into tiny bits, then mother nature will eat the bits.

Most plastic bags in this country (supermarket type) are made from Natural Gas instead of petroleum. They degrade much faster. But still don’t be a litter bug 🙂

I am of the opinion that this anti-plastic bag nonsense is being pushed by the chemical companies. If people don’t get free plastic bags to take their groceries home they will have to buy plastic bags in the store to replace what they are using the free bags for – such as tossing used kitty litter or garbage. To me the only one use bags are those that you have to buy to use for the same thing you are currently using the recycled grocery bags for.

While shopping in California tonight, it struck me how many of the grocery shoppers–especially those that buy for whole families–are WOMEN. Since women are now working full time and taking care of the families, the disparate impact of plastic bag bans fall on women who have to either remember to carry around a bunch of bags in the car or have to BUY bags at the point of purchase.

What we need in CA is a DISPARATE IMPACT lawsuit showing that plastic bag bans are, in effect, sexist and anti-woman, since women are overwhelmingly affected.

And lest you think I don’t care about garbage or baby seals, or dolphins, I took a look at how many products in stores are covered in plastic from stem to stern. The plastic for bags is a lot less than the general plastic and assorted litter produced by the product packaging itself. Why are corporations allowed to pack everything in plastic while real women, feeding their families, can’t have a couple of bags?

“…scientists believe this process can take hundreds of years, or even up to a century, in landfills.”

Journalists and math…rarely a good combination.

The urban tumble weed is an ugly sight along America’s roadways. But like most things it comes down to personal responsibility. Local fees for littering should be strictly enforced putting the responsibility on people who use them irresponsibly, not on those of us who reuse and recycle them.

Personal responsibility? Really, who cares about responsible behavior? Who cares about consequences? Seems like every day that goes by shows our culture, our society, is being overwhelmed by amorality. There are a thousand issues I’d love to see subjected to”strict enforcement”. When can we start? PS. Have lived in Michigan for years–stores in the Detroit area have always used plastic.

Line my small wastebaskets in kitchen and bath with them.

The ones with non-flammables go into someones dumpster (about 2 a month.