Lone Student Shuts Down Protest in U. Washington Library

Lone Student Shuts Down Protest in U. Washington Library 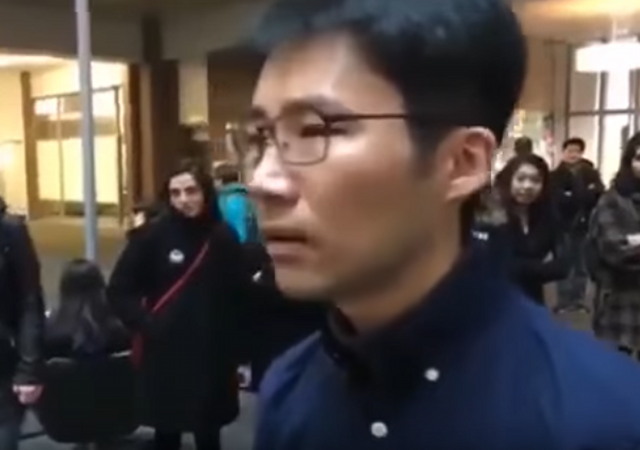 Back in November of 2015, we covered a Black Lives Matter protest at Dartmouth College which loudly invaded a school library, making it impossible for students to study:

Dartmouth College students who are part of the Black Lives Matter movement recently staged a protest which invaded a school library. As we reported yesterday at College Insurrection, some students who were trying to study allege physical assault.

Campus Reform has the details:

Ostensibly there to denounce the removal of shirts from a display in Collis, Dartmouth’s student center the Black Lives Matter collective began to sing songs and chant their eponymous catchphrase. The band then marched into Baker-Berry Library.

These shouted epithets were the first indication that many students had of the coming storm. The sign-wielding, obscenity-shouting protesters proceeded through the usually quiet backwaters of the library. They surged first through first-floor Baker-Berry, then up the stairs to the normally undisturbed floors of the building, before coming back down to the ground floor of Novak Café.

The students received no punishment for that incident.

Recently at the University of Washington, a similar event took place when a group of students invaded a school library with a bullhorn to protest Trump. This time however, they were shut down by a single student.

An hour after Republican President Donald Trump’s inaugural address, a KING-TV reporter noted on Facebook, a small band of protesters invaded the library and fired up a megaphone-charged chant.

As it kept up, one guy stood in front of them, and rather than meekly staying silent like the rest of his fellow bystanders, he actually tried to get the protesters’ attention: “Hey! Hey!”

After one last “Hey!” the protesters finally quieted down. And without any nuances or apologies or “I agree with what you’re doing but” preambles, he offered a three-word observation that likely summed up others’ sentiments perfectly.

“This is library,” he said.

That guy is a hero.

Incredible! ‘Students’ at two of the most expensive schools in the country shouting about privilege. I guess they have some beef – they’ll be in hock for whatever education they get for the next 20 years.

Nah, it’s only a matter of time before some collectivist politicians, groveling for votes, will “forgive” their student loan debt. Which means that YOU will be in hock for it for the next 20 years.

Unfortunately, the loud-mouthed leftists are commonly the recipients of financial aid. It’s usually the children of the working class who are saddled with the highest amount of debt, if they choose to attend the incredibly expensive, top tier schools.

The intervening student’s name has been released: E.F. Hutton.

“In 1960’s Sicily, the Mafia were everywhere — and never seen. In the town of Cinisi, known as ‘Mafiopoli’, their power was unspoken, and absolute: ‘it’s in the air that you breathe’ as the locals used to say. One man however, dared to speak out.”

Ok, yeah, maybe he didn’t stand up to the Sicilian Mafia. But still, nice job.

I wonder if he is a Chinese exchange student.

I don’t know his story, but he appears to be an American, standing up to a bunch of anti-Americans.

BLM has a visible [class] diversity orientation. They are a sect of the Pro-Choice Church and political faction of the Democratic Party.

“BLM has a visible [class] diversity orientation. They are a sect of the Pro-Choice Church and political faction of the Democratic Party.”

From their beginnings in Ferguson, MO, where they originated the “Hands Up, Don’t Shoot” lie about Mike Brown, who died while trying to murder a law enforcement officer (LEO), BLM has been a tool of the NBR, the New Black Racists. With a few notable exceptions (Obama and Holder, for example) most Democrats are not behind a group that marches through the streets after a LEO’s murder chanting “What do we want? Dead cops! When do we want it? NOW!”

BLM is nothing more nor less than a group of radical black racists and should be treated as such. They have no legitimacy, deserve none, and should not be given any by inclusion in any government discussions of any kind.

This scene is reminiscent of the lone man who stood against the progressive bellicosity of the Chinese social justice warriors as they demonstrated their glorious ambitions to trample the people and… disrupt their quiet library sanctuary.

Nothing makes me happier than knowing the megaphone snow flakes are going 100k in debt to carry on like this.

PLEASE tell me they are paying out of state tuition.

When those bills come due, they’re going to learn a little bit about slavery.