“No specific violations of the Standards of Conduct.” 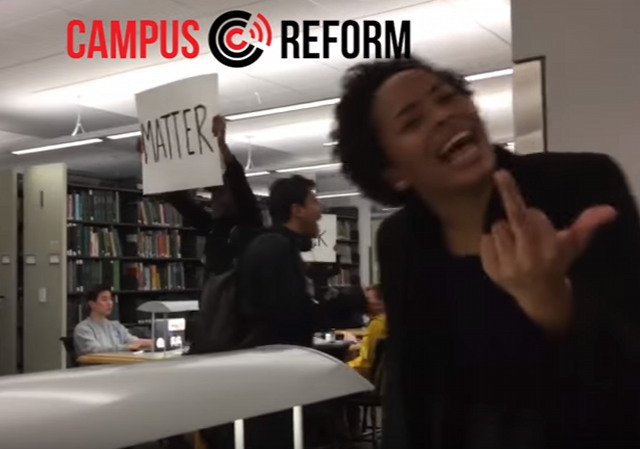 Last fall a large group of Dartmouth students who are also Black Lives Matter activists, marched into the school’s Baker-Berry Library and caused a disruption.

This was no small affair. Campus Reform reported that students in the library who were simply trying to study alleged physical and verbal assaults such as “F*** you, you filthy white f***s!”

An investigation was launched, and the Alumni Relations office has now concluded that no punishment is warranted.

Dartmouth’s Assistant Director of Alumni Relations, Meg Ramsden, has been busy communicating to the school’s alumni to inform that the Black Lives Matter activists who, back in November, charged into a campus library chanting and yelling racial epithets won’t be subject to any punishment for their actions.

“After concluding its investigation with respect to the complaints and studying what was seen in the video in Baker-Berry Library, it was determined there were no specific violations of the Standards of Conduct,” Ramsden writes.

“In essence, no rules for which there are recorded and communicated sanctions were broken.”

Ms. Ramsden does go on to say that, despite there being no Standards infringements, “the spirit of the recent Moving Dartmouth Forward Citizenship Pledge was clearly violated.”

Here’s a video from the incident for anyone who hasn’t seen it:

Joseph Asch of Dartblog makes an excellent point about all of this:

So, first-year law students, just what principle are we to derive from Ms. Ramsden’s tortured logic: that any group can invade the library and verbally insult students who otherwise were calmly and quietly studying there?

Does such aggressive behavior not violate Standard VIII of the Dartmouth Community Standards of Conduct, which includes a prohibition on:

…conduct (including by way of example, obstruction, noise, or the display of banners or objects) that prevents or disrupts the effective carrying out of a College function or approved activity, such as classes, lectures, meetings, interviews, ceremonies, and public events.

And how about NH TITLE LXII CRIMINAL CODE CHAPTER 644 BREACHES OF THE PEACE AND RELATED OFFENSES Section 644:2?:

644:2 Disorderly Conduct. – A person is guilty of disorderly conduct if:
(c) Disrupting any lawful assembly or meeting of persons without lawful authority…

Asch goes on to suggest that the Dartmouth Republicans get creative and test the school’s new tolerance for disruptive behavior and see how far they get.

Much like progressives who have continually excused President Obama’s decisions and behavior, the administration at Dartmouth has now set a precedent they may one day regret.

Well, yes it is acceptable. You just said so.

Well, no. You forgot the “unless we agree with your ideology” part.

The library is no longer a place of peace and quiet?

The BLM jerks learned this from the BDS jerks. They were just replicating what they had been taught.

That’ll teach’em! After a tongue-lashing like that, I bet the BLM crowd will think twice before they do that again!

So racism and disorderly conduct are acceptable behaviors at Dartmouth. But micro-aggression and white privilege and conservative speech is not acceptable?

This is where one is to send a son or daughter for an education? An expensive education?

If the Dartmouth Republicans so much as breathe wrong, they’ll learn the lesson of “double standards”. I suspect they already know as much.

If I were a present student at Dartmouth, I would sue claiming the following damages: wasted tuition for the time of attendance, delay of the start of my career due to the fact that I must transfer and loss credits, general costs of transfer. The present action proves to me that I can no longer feel safe studying there which will be a great require me to transfer.

You know what, I feel they have would have better cause then the students of Trump U.

The judge ordered the publication of all the Trump U teaching materials. From the description in the paper (which was not as technical as one could wish), it sounds like the materials were very detailed, on many levels.

I had thought the gravamen of the cause of action was that there was no real control exerted over the curriculum, but the news story does not support that accusation.

Also, California is having a boomlet of “consumer protection” litigation aimed at education, including bar review courses. I was not impressed by the case against the bar review course, either. It was all very mosbyesqe.

Yay, Dartmouth – you’ve just won the Stupid Prize. You can expect to see more such “protests” in the future ~

Well. At least the national media never takes a side against Conservatives.

NO punishment, are you serious? If my mom found out I pulled a stunt like that, she would have me hanging from a tree and beating me with a switch because she raised be better than that. So I guess these days being non-white constitutes that I could perform anything disrespectful to nearly criminal without any consequences?

You couldn’t if your disrespect were aimed at leftists.

My uncle founded that college. Maybe he shouldn’t have.

But they have accepted it, so clearly it IS acceptable — so long as it is done by certain (i.e. black) students, but not by others.

I liked how Dartmouth tried to justify their failure to act by citing the First Amendment. Even First Amendment rights are subject to reasonable time, place, and manner restrictions. And prohibiting students from screaming racist insults into the faces of students trying to quietly study in the school library is clearly an appropriate restriction.

Criminal inmates are running the asylum. There’s even one in the White House.

Actually, they are telling the truth. On any American campus, or in any Leftist controlled area, THERE ARE NO STANDARDS that apply to anything that Black Lives Matter does. They cannot be, nor will they be, sanctioned or punished for any crimes they commit. Another symptom of the fact that there is no functional rule of law, applicable to all and by the consent of the governed in this country.

Is there any group in America as dumb as school administrators?

You do realize that these actions are based on the training they receive in their many conferences, don’t you? This nonsense has a theoretical basis, of some sort.

That would be BLM.

Apparently Dartmouth has no standards of conduct.

Library as “safe space” must not be a concept BLM is familiar with.

Just wait until donations to Dartmouth drop by 50%… then they’ll care. Same thing happened at Mizzou. They doubled down until they realized they’d go bankrupt monetarily, as well as being bankrupt morally.