“everything he has to say has to bring people down” 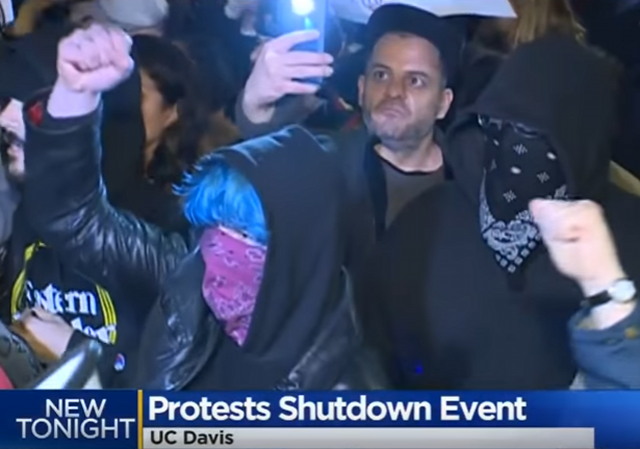 The College Republicans at UC Davis invited Milo Yiannopoulos and Martin Shkreli to give a talk on campus which was to focus largely on free speech but the event had to be cancelled because leftists protested and authorities feared violence.

This is a perfect example of the ‘New Civics’ we profiled in a recent post.

Protesters and people interested in the event were so heated they didn’t even believe that the event was canceled when it was announced. People for and against the event rallied for hours.

Protesters blocked doors. Police tossed them out. Nobody got inside, not even the Davis College Republicans’ headliner, conservative commentator Milo Yiannopulos.

“We came here to have an event that would promote free speech,” said Executive Director of the College Republicans at Davis Andrew Mendoza. “And we didn’t get to have any speech.”

The 400 free tickets went quick, and not just to students. Brandon Toney-James drove in from Sacramento. “Milo is a rising young conservative star, and I wanted to see him pretty much close and in person,” he said.

Others had no desire to see the commentator.

“Mostly with Milo, just how everything he has to say has to bring people down,” said Haley Scholety, a student at UC Davis. “It’s not what we should stand for as a community, especially at Davis.”

Nearly 60 UC police officers worked to control the crowd, making one arrest for obstructing an officer and battery of a peace officer. Event organizers made the call to cancel.

After consulting with UC Davis Police Department and UC Davis Student Affairs officials, the Davis College Republicans canceled tonight’s event featuring Breitbart columnist Milo Yiannopoulos. The decision was made at about 7:00 pm, 30 minutes prior to the scheduled start of the event, after a large number of protesters blocked access to the venue, and it was determined that it was no longer feasible to continue with the event safely.

“I am deeply disappointed with the events of this evening,” said Interim Chancellor Ralph J. Hexter. “Our community is founded on principles of respect for all views, even those that we personally find repellent. As I have stated repeatedly, a university is at its best when it listens to and critically engages opposing views, especially ones that many of us find upsetting or even offensive.”

Twitchy has collected some photos and videos from the scene:

Protestors on @ucdavis campus. Peaceful so far, but a lot of people here for Milo mocking the protestors. @ABC10 pic.twitter.com/0z93i2B6j1

Things getting a little heated, but protests are peaceful @ucdavis @ABC10. pic.twitter.com/d43Q3mesz0

It remains the case that the students who shut down Yiannopoulos at campus after campus are playing directly into his hands. By proving him right about the college left’s intolerance, students ensure that Yiannopoulos will be able to continue promoting his agenda and claiming the mantle of free speech martyr. He will arrange more speaking tours, make more media appearances, and sell more books. The outrage that follows him wherever he goes is beneficial to him.

This intolerant behavior is expected anymore. It’s the norm, where some combination of outside near professional protesters amplify true campus based people, students and academics.

The only surprise is that it continues to go unchecked by the donors as well as by legislatures that fund operations and endowments. Maybe disappointing is the better word.

Tyrant Obama the Liar gave nearly a billion dollars of the $15 billion he extorted from BoA to fund progressive fascist causes like shutting down this speach.

Every time the admins cave to this, the left wins.

The feed off this bully-boy tactic. It gives them power.

*TheY (wishing for an Edit button….)

They feed off bullying because it is highly successful in the academe. By contrast those tactics have been less effective in the general culture, with a few wins. But I think the Trump election is a catalyst because it is a clear signal their approach is losing impact.

Brownshirt veto. About time college administrators started expelling students involved in this kind of crap. Non students should be prosecuted for disruptive behavior – at the very least.

They need to expel the professors involved, too. That, and prosecute violent non-students to the full extent of the law.

This is a failure of the administration and the police and the legislature. If a university that receives taxpayer funds in any form will not protect free speech, the taxpayer funds must cease to flow.

Many of these are not students. The University is losing control.

Now is the time to slash funding for institutions (including PBS and NPR) that are fostering or enabling this kind of fascism, chaos and hate.

Hold your legislator’s wimpy feet to the fire.

Interesting how the Sacramento Bee is referring to Milo.

Guarantee you that none of these lefty goons have actually ever heard Milo speak.

Milo could not buy this kind of advertising for his book.

By the way…. the Sacramento Bee is the flagship for McClatchy news. In around 2005 McClatchy stock was up around $70/share. They dropped so far that they had to do a 10 to 1 reverse split just so they would not get kicked off the NY stock exchange for being worth less than $1 per share.

During this period of collapse their CEO…. Gary Pruitt. Yeah… the guy that is the head of Associated Press. Wonderful. Gary is a lawyer who specialized in first amendment issues when he was hired.

When your stock goes from $70 a share to pennies on the dollar, what do liberals do????

“The only proper response to outrage culture is to be outrageous.”
Milo Yiannopoulos

Isn’t THAT the way FASCISM works?

They’re being allowed to do these things, not imposing them as might a government. Universities and law enforcement can stop this tomorrow had they the will and/or support, and I suspect that by summer they shall have it from Mr. Sessions.

…by summer they shall have it…

In a lot of respects it’s up to the alumni benefactors who should be assessing the behaviour of the students and the enabling behaviour of the university administration, and making decisions about whether to contribute to UC Davis $180+ million yearly philanthropic donations. If they are displeased then they need to pass that information to UC Davis. Some donors might be pleased with the unfettered students’ actions – many are likely horrified.

My alma mater. Shaking my head in shame.

I pray you are right.

Those “students” need to receive a few hundred rubber bullets as a reward for there interest.

It’s the same as claiming Trump is not legitimate. It unwittingly does the Russian job to sow discord and division in the system itself. Who are the actual dupes?

What more needs be said about who is illiberal in today’s day and age?

Afterwards, Interim Chancellor Ralph J. Hexter muttered an impotent response to the riot; “Our community is founded on principles of respect for all views, even those that we personally find repellent….” Blah, blah, blah.

When you expel those instigating this riot, Chancellor, we’ll talk. Until then you’re complicit in maintaining this fascist anti-constitutional campus – subsidized by tax dollars.

So … where is the evidence that this has anything to do with students?

Premise: Some students have been whining about speakers who make them dash to their “safe spaces.”

Premise: Violent rioters caused the event to be canceled.

Conclusion: Whiny students are responsible for the violence which canceled the event.

This is NOT a valid syllogism.