But a BUYcott effort is launched as Trump jumps into the fray. 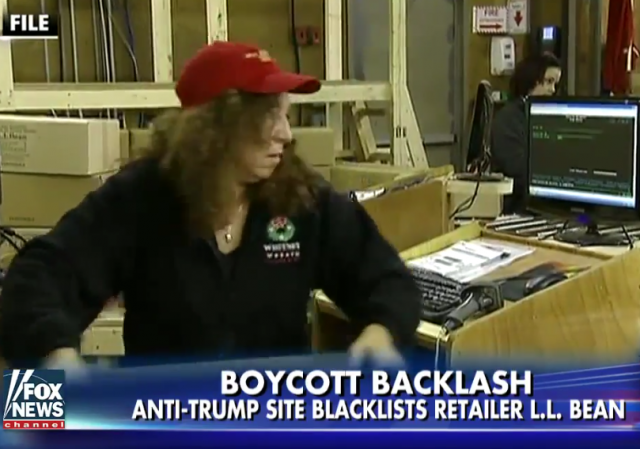 The pattern of leftist thugs trying to take down a company or person over support for or even affiliation with a cause they don’t like is repeating itself, this time at L.L. Bean, the famed Maine-based company.

Trump opponents are waging a campaign to boycott L.L. Bean after it came to light that a member of the family that runs the business, Linda Bean, donated a healthy sum of $60,000 to a Trump-supporting super PAC. A group called Grab Your Wallet, which maintains a list of companies to avoid due to ties to Trump, called for a boycott, and now leadership at the company is taking those threats seriously, urging people not to let politics influence their opinions of a 100-year-old brand.

L.L. Bean board chairman Shawn Gorman sounded off about the proposed boycott on Facebook, saying he was “deeply troubled” by the implication that the outerwear brand has political leanings.

“We fully acknowledge and respect that some may disagree with the political views of a single member of our 10-person board of directors,” he wrote. “Like most large families, the more than 50 family member-owners of the business hold views and embrace causes across the political spectrum, just as our employees and customers do. And as every member of the family would agree, no individual alone speaks on behalf of the business or represents the values of the company that L.L. built.”

The story was featured on Fox and Friends this morning:

Donald Trump has joined the battle:

It will be interesting to see if this backfires on the boycotters, as it did with the young woman singing the national anthem at the Inauguration, Jackie Evancho’s Album Hits #1 After Announcing Performance at Trump’s Inauguration.

Folks at Northeast Shooters are pledging to buy more goods from Bean.

We should use these lists to identify business to do business with! Just like the time I grabbed a list from the jew haters of all the items they wanted shoppers to avoid because of their racism. Let me tell you Ive never had so much kosher salt and stuff ever in my life before! 🙂

The only “problem” with L.L. Bean is their stuff lasts pretty much forever. Wear their khaki shirts every day and have two of the six in my closet that are over five years old and still in good shape. Think I’ll retire those and order a couple more just to piss of the GYW idiots.

Since Chik-fil-A, right-wing buycotts have so consistently trounced left-wing boycotts that the conspiracy theorist in me starts to wonder if these aren’t just false flags ops perpetrated to boost sales. Of course, the right generally has way too much integrity and self-respect to do such things, but still it makes me wonder.

I am surprised more niche companies haven’t embraced conservatives to ride the positive wave. No need to false flag. Wear it proudly and the progs will attack on their own.

Fox News was just that – an attempt to identify an underserved niche.

The LL Bean “mother store” in Freeport, ME boasts one of the finest gun shops in the Northeast. No, wait, and Hillary took her money? Nah, can’t be. Hillary wouldn’t do that. Must be a mistake.

(Oh, and Professor, why not a picture of Linda Bean on the column instead of a blurry video clip of a line worker? Just askin’. And yeah, have my share of LLB gear.)

wife used to work there, its a big deal up here in maine.
but don’t hurt yourself jumping on any bandwagons, stopped clock syndrome (as applied politically) applies here.

I thought LLBean was already on the Loony Left ****list, because the Freeport emporium is filled with stuffed game animals.

Actually, because of those trophy animals, I thought LLBean had long ago learned the lesson about how to deal with these jerks—STOP SURRENDERING! They’d taken the animals out, so as not to offend the Yupster crowd; but somebody at Corporate got an attack of good sense, remembered that it was actual hunters and serious campers who were the core of the customer base, and realized that there were advantages to halting the nonstop pandering to the wannabees even if they have spending money. So the animals came out of storage and moved back onto the sales floor.

But after this sort of mealy-mouthism, “… no individual alone speaks on behalf of the business or represents the values of the company …”, well, I suppose maybe they’ve forgotten again.

According to the WSJ …
Billionaire hedge-fund manager George Soros lost nearly $1 billion as a result of the stock-market rally spurred by Donald Trump’s surprise presidential election.

Of course, he was “investing in America” with all that Open Society jazz.

I went to yahoo finance to check their stock price and it’s a private company.

She said her grandfather gave her her first share of stock when she was born? Does she mean something other than a “share of stock”?

Private companies may issue stock, which may not be sold to the public, for internal use. This would include shares of ownership for, e.g., the family, number of votes when votes are taken, distribution of income, and, for employees, retirement funds.

I just made my first ever online order on l.l.bean’s website. I think I’ll have some chick-fil-a to celebrate.

would highly recommend.
I pretty much wear only these for shirts

I ordered a couple without the pocket. Glad to have your recommendation. I’ve been in a hunt for a replacement brand of solid color t-shirts since my favorite brand went low quality.

I love buying their snow clothes for the kids. I buy in gender-neutral colors (so blue, black, red, grey) to fit the oldest and pass them down the next year. The LLBean clothes are still going strong on kid #5. Definitely worth the money!

LL Bean is great stuff. I wear a lot of it while out hunting and shooting animals with guns. The anti-liberal triple threat.

I make all my own clothes.

Little ticked at Duluth Trading Company. While I generally have liked the stuff I ordered, my favorite shirt began shedding the snaps on the neckline. I wrote to them and they said I could return it – but I’d have to pay the postage. What? Defective and I have to pay? Won’t be ordering from them again.

Just placed an order for stuff I really didn’t need! While I was trying to make up my mind about a pair of pajamas, it was whisked from my cart – sold out as I shopped!

LL Bean doesn’t carry anything for tall women, so I can’t buy for myself, but their men’s clothes and their housewares are outstanding.

I couldn’t possibly boycott every company with leftist leadership. I’ve ignored the outgoing Starbucks CEO and bought coffee. Just a few companies have so annoyed me that I’ve quit using them. Bill Penzey of Penzey’s Spices was so awful recently that he drove me to order from The Spice House; and being here in NC, I am very unhappy with Target for its stand on HB2, and with the ACC/NCAA/NBA as well.