Bitter people have torn apart the young girl for accepting the invitation. 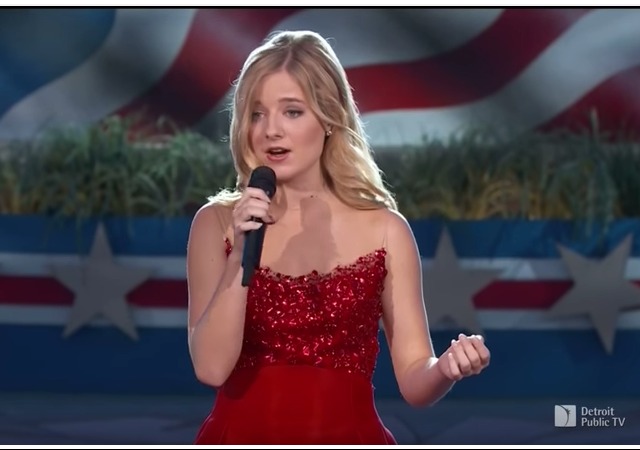 When will celebrities realize they will not suffer backlash for associating themselves with President Donald Trump? He has not had an easy time finding performers for his inauguration, but he found a yes with 16-year-old Jackie Evancho, who will perform the National Anthem.

Of course people have bashed the young girl, who broke through on America’s got Talent, and claimed the performance will ruin her career. Yeah…her album has hit #1 and sales have quadrupled.

I thought the left was the tolerant ones? Who bullies a 16-year-old girl?

TMZ reported that places had to restock her album Someday at Christmas TWICE. TWICE!!!

It looks like the publicity of her acceptance has actually helped this brilliant artist. Have you heard Evancho? Her voice is so good.

Here she is on America’s Got Talent back in 2010 when she was only 10-years-old!

On the Billboard charts, her Dream With Me album and O Holy Night EP have reached #2.

Evancho spoke to People about the abuse she and her family have endured since she accepted the invitation:

Many celebrities have their share of haters, but trolls attack the singing sensation’s family for a very personal reason as well.

“My family is kind of a big target. I have a transgender sister and so a lot of hate goes towards us,” Evancho tells PEOPLE Now.

Juliet, 18, revealed that she was transgender at the Global Lyme Alliance’s inaugural gala in New York last year. Although her family was accepting, some members of the public shared their negative opinions on social media.

WE DEMAND TOLERANCE FOR TRANSGENDERS!!! Unless that transgender has a sibling performing for Donald Trump. The hypocrisy and double standards of the left are almost too much to bear because they remain so freaking obvious!

Maybe they should do some research because she has performed for President Barack Obama TWICE. She sang “O Holy Night” at the National Christmas tree Lighting in 2010 and at the prayer breakfast in 2012.

The lesson? Don’t be afraid to be with Donald Trump.

For the left? Keep bashing those who don’t say no to Trump. Please. I’m begging. I can’t get enough of your tears and I’m not even a Trump fan. Also, stay classy attacking a young girl and her transgender sister.

The Left is filled with sanctimonious hypocrites ranging from “peace”-mongers to selective inclusionists (“=”) to class diversitists (e.g. racists, sexists) to “green” Profits (sic) to elective abortionists.

As we leave the twilight of yesteryear, the dawn of a new day brings Revitalization, Rehabilitation, and Reconciliation.

I question the reconciliation part.

Word. But it takes two to tango, and if the partner is a no-show, that’s not our fault.

There is such great literature, movies, and music to delve into, with the contemporary contributions amounting to a minuscule amount. So, if they so desire to create an unfavorable image of themselves that I’d rather not partake of their offerings, it’s their loss and not mine.
That they so attack a young performer just additionally shows them to be the shallow nit-wits they are.

Once again, many people are voting with Jackie Evancho the clear winner and the so-called celebs LOSERS!

Only an angelic young performer like Jackie, or someone like Kanye who’s a big enough star and just doesn’t care, can defy the Hollywood blacklist.

Our black list is much bigger than Hollywood’s black list. Stop buying their music or movies. Don’t bother to see their movies. Cancel your Netflix or Hulu accounts. Without an audience these “performers” are nothing at all – and unemployed.

Here’s my blacklist (can I say that? Is that racisss?). I’m constantly adding to it, so feel free to use it as the start of your own list. At the end, you can see how I will still be entertained by those on the list without contributing to their coffers.

Most on the list are movie “stars” (the few on the list are musicians, but they don’t produce the type of music I listen to anyway), and I plan on watching their movies – after I buy them at a second-hand book store, maybe two or three years after their release. But I will get to see the movies, pay less (in many cases) than I would have for a ticket, get to watch it again (if I want) for free, and my money doesn’t go to Hollywood.

I’ve been spelling Arnold’s last name as Schwartzenkennedy instead of Schwarzenegger for years now….

Wife and I watch AGT since its inception. Very happy to see her staying above this fray…she was and is a phenom!

The left is filled with despicable people (not to be confused with deplorable people like me.)

I have been watching this young ladies videos for years and have watched her grow up. I hope she stays strong. She has a long and wonderful career ahead of her.

I am officially old and out of it. I’ve never heard of the young lady. I’ve got work boots older than her. Very nice voice.

Mary, thanks for the story. I had purchased her last album but hadn’t checked back since. Superb Christmas album (and a nice single release separately). Bought them both, which I likely would not have done without the Progs reminding me how awful she is.

The libs never learn. The lines at Chic Fil A are still long most of the day but a #7 is worth the wait.

How quick this turned to Chik Fil A! HAHAHA