The tolerant left once again showcases its true colors. 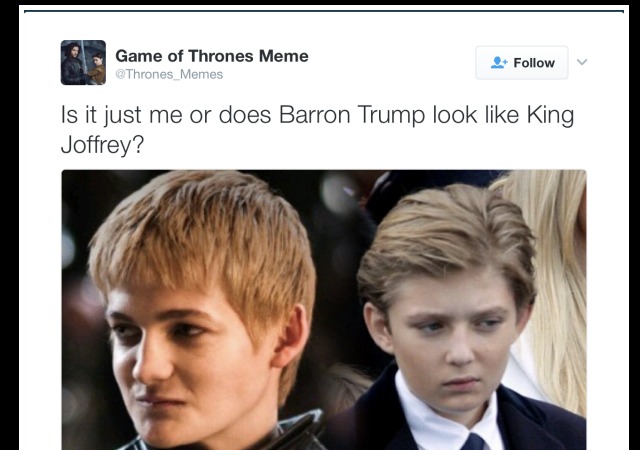 Children of politicians, especially young ones, remain off limits. But the tolerant left forgot that basic courtesy on Inauguration Day when so many attacked 10-year-old Barron Trump.

Hate President Donald Trump as much as you want, but don’t attack his children. Lord knows I couldn’t stand President Obama, but I would never attack his daughters.

That it even need be said is ridiculous, but mocking the 10-year-old child of a politician you loathe is odious, immoral, & self-defeating

These leftists should listen to Tapper, who always seems to become the voice of reason during a controversy.

Something tells me this Saturday Night Live writer will keep her job. I know if I said anything like this, Professor Jacobson would have my head.

@jaketapper Well… she seems to be the biggest offender. But that’s just me. pic.twitter.com/zgKoHEuwal

How do I know? Back in 2009 the professor made clear his feelings about attacking the children of politicians:

Obama did not make Malia an issue or use her as a “prop,” which were the excuses used to go after Trig. The children of politicians inevitably appear in public, at campaign events, or in photos, but that does not make them fair game.

Regardless of who is to blame and who hyped what for whatever reason, leave the kid alone. Period.

I’m thankful to work at a civilized place. While Rich’s tweet is by far the worst, it’s not the only one out there.

Is it just me or does Barron Trump look like King Joffrey? pic.twitter.com/lJKVyfqgDw

Melania Trump received a lot of criticism for not appearing on the campaign trail with Trump. But with the way that people attack her son can you blame her? I bet the kid has a hard enough time trying to enjoy a normal life and that’s all Melania wants to give him. Make life for him as normal as possible.

Screw you, leftists. Quit preaching for tolerance when you can’t even be nice to a kid.

There are, of course, people on BOTH fringes of the political spectrum who literally never understood the whole concept of “decency”.

This, again, is an example of the terrible amplification of the worst in American culture made possible…indeed, ENCOURAGED…by “social media”.

These people are the KKK and Westboro nutters on the Left. They deserve the strongest execration society can dish out.

What a laughable joke of false equivalency.

The people attacking Barron are prominent reporters, writers, actors, etc. And a shocking number of people are agreeing with them, ‘liking’ them, or encouraging them.

Westboro and the KKK? They’re extreme fringe almost universally reviled and rejected by the right.

Jake Tapper seems to be just about the only prominent liberal rejecting this BS.

The hatred and intolerance of the left is once again on full display. That’s how you got Trump, and that’s how you will get more Trump in 2020 if this keeps up.

Looking at Mary’s citations, I don’t see who you’re talking about.

If you have ANYTHING to substantiate your bogus claim, post it.

What I see is a bunch of nobodies who are sick.

I don’t see any quotes from any of them in the article.

Katie Rich is in the posted article.
You can search fat rosie for her comment calling Barron “autistic”. Not hard to find.

Katie Rich is in the posted article.

Since I can’t draw a map and post it in LI, read again. Two screen shots of tweets have her. Its not difficult to find.

Do you mean the one by EducatedHillbilly?

No, the one by Katie Rich, with big letters “Baron will be this country’s first home school shooter”.

She has now been “suspended” by SNL, by the way.

No, the one by Katie Rich, with big letters “Baron will be this country’s first home school shooter”.

That’s not anywhere in the posted article.

Olinser is correct. The hate that comes from the right is from the extremists that the rest of the right rejects (and left attempts to smear the entire right with it). The hate coming from the left is driven from the top down. Far from decrying the hate, its leaders, stars, and celebrities are its mongers. No need to go to the anarchists and commies, when the luminaries of the movement are spewing the vitriol. No need to paint the entire progressive movement as haters when its leadership at the head of the hateful charge.

The same people who went after Trig Palin are now going after Barron.
Sigh……..lower than the low.

I agree with your overall point, but I’ll observe that the KKK has ALWAYS been a creature of the left. Hillary’s mentor Robert Byrd could tell you all about it if he wasn’t burning in hell right now.

So are the Phelpses. Long-time Democrat activists, never had any connection to the political right. (Nor to any actual church.)

When the going gets tough, the tough get going.

When the going gets tough for the left, they malign ten year-olds. Sick people. And one of them was just our president. It can never happen again. Coming: the revenge of Barron Trump.

Don’t like to push my own blog, but this is fun, considering:

When I say liberals are six-year-olds, it’s not a rhetorical device.

When you have NO ammunition to fight in the war of ideas, you are often left with nothing but insults. When a person resorts to insulting you rather than presenting evidence to support their idea or position, you have won the battle.

The people insulting Barron Trump, Melania Trump and Ivanka are the same ones who were screaming that insulting Michelle Obama or either of the Obama children could NOT BE TOLERATED in a civilized society. Double standard, much?

Baby hunts are expected. Twilighters are selective and opportunistic on principle (i.e. character). The concern is when they undertake baby trials. That’s when there are progressive wars, extrajudicial trials, immigration reform (e.g. refugee crises), and, of course, abortion rites.

Democrats created the KKK and led segregation in the South. Republicans led the fight to end slavery.

I dunno, I get more of a Damian vibe than King Joffrey.

“Quit preaching for tolerance when you can’t even be nice to a kid.”
Nicely stated.

King Joffrey was awesome. The show wasn’t nearly as good after he left.

To be fair, Malia Obama caught some internet mockery with a fake “application letter” to Harvard.

Khalid al-Mansour’s diatribe: “A Little on the History of Jews”
https://www.youtube.com/watch?v=AIrWrxuR_GM

And, as Chelsea Obama’s preacher of 20 years would say, “Good damn America.”
https://www.youtube.com/watch?v=UnlRrxXv-v8

Oops – forgot the link to the story of the Khalid al-Mansour/Obama/Harvard connection:

Aside from the most recent examples, namely the attacks on ALL the Palin children, and the Bush children, and the outrage at any mention of the Obama children or criticism of Michelle, I can remember the furor when people criticized Amy Carter’s manners. She was attending a formal State Department dinner–which she probably should not have, at 8 years old–and reading a book at the table. Oh my!

Scummy excuses for human beings? They will preach and lecture the right about tolerance/hate and then completely violate their own code of conduct they set for others.

The violators need to be completely eviscerated.

We can sum this up this way:

Ten-year-old Barron Trump is being attacked by America’s left.

Well, at least he’s being attacked by other ten-year-olds.

Barron looks as if he’s not sure what to do with himself. This is not surprising. He has never been in this kind of situation before.

This is not what a ten-year-old is accustomed to.

I guess you forgot that Ms Chastain.

Who then resigned her position as a result. She got called out for her attack by the right side.

Let us know when the left demands the resignation/firing of the perps mentioned above.

Elizabeth who? You can’t even get her name right. Not only was she immediately forced to resign, but she criticised them for their actual misbehaviour. They had actually acted and dressed inappropriately, at an age when they should have known better. Why should they be immune from such criticism? Barron, however, did not misbehave; he’s being criticised simply for being the kid he is, not for anything he did.

We are supposed to draw some profound insight from the “observation” that the boy may resemble the actor who portrays a fictional character on a television fantasy series? Wow. The mind reels from such stupendous feats of logic and intellectual prowess!

I have already said an Irish prayer for those hyper-critical of a ten year old:

God must have answered my prayer,
because I see a whole lot of limping here.