“What did he inspire?” 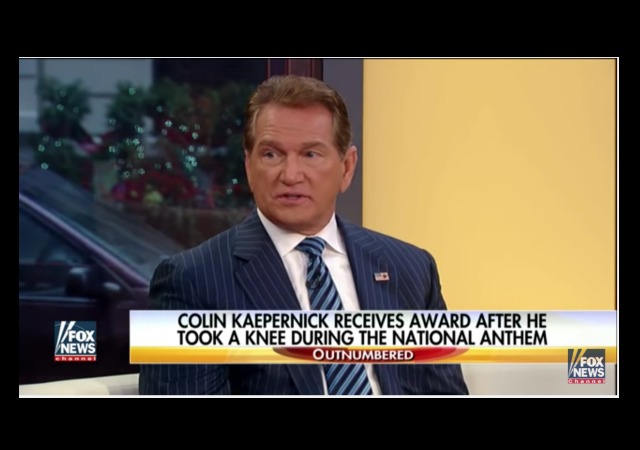 The team chooses the player “49er who best exemplifies the inspirational and courageous play of Len Eshmont, an original member of the 1946 49ers team.” This 49ers team did not perform well at all:

“This award doesn’t mean anything to me,” said Theismann, who led the Washington Redskins to two Super Bowl appearances, winning one, in the 1980s. “Inspired and courageous? You’re 2-14. What did he inspire? You’re [1-10] as a quarterback [this season]. What [did] you possibly inspire?”

But it goes deeper than that since Kaepernick started a trend of kneeling during the national anthem.

Kaepernick received a lot of criticism when he chose kneel during the anthem. Unfortunately, it caused a trend and others followed his lead. This action has offended Theismann, along with many others across the country:

“The players voted for it,” Theismann said. “You question players at times. They just sort of move along in mass and do this. I don’t agree with what he has done. As a matter of fact, the American flag, and I wear one on my lapel very proudly, no matter where I go, it stands for the right to be able to do the things that you want to do. To be able to stand up and have a difference of opinion and I agree with that part of it. But not when you are on the job. I would like to see the National Football League finally stand up and take a stance and say: as a part of our new policy, going forward, we are going to adopt the same policy that the NBA has. That you will stand for the national anthem.”

But Theismann also had a bone to pick with the NFL over Kaepernick’s actions. He called Commissioner Roger Goodell “wishy-washy” on it while owners, like Kansas City Chiefs owner Cloark Kent, has made it clear that players will stand for the anthem or he will let them go.

Theismann reminds Kaepernick why we stand for the anthem:

Diversity is traditionally characterized by

With the establishment of the Pro-Choice Church, [class] diversity reversed this relationship.

Kaepernick did seem to inspire lots of people to STOP WATCHING the NFL, so he’s got that going for him…

Not only that, Voice, but he’s exposed the 49er establishment and the NFL as anti-American shills as well. They allowed him, while in uniform and at a sanctioned event to politically demonstrate an anti-American attitude and LET HIM DO IT, indicating that he is speaking for them as well.

exactly correct. free speech applies to personal time and nearly all employers restric speech on the job. so the 49ers clearly are anti-American by not directing their players to stand for the anthem.

F¥€|< the National Felons' League, I hope they go bankrupt.

To be fair, I don’t think the NFL is anti-American. They passed on Obama’s offer to promote Obamacare.

This does not exonerate them. I think they are as pathetic and impotent as those Republicans that don’t want to rock the boat and refuse to stand up and fight back when they get knocked over by the libtard brigade.

You don’t see this crap in the National Hockey League.

If I recall, Kaepernick, he with so many complaints, has never bothered to vote.

Sorry about the accidental down vote. Most of the players in the NHL are from other countries, but they stand respectfully for the US and Canadian anthems

That’s because 92% of players are from the US or our 58th state Canada, while the rest are farmboys from northern Europe and Russia. Having reached the NHL, they are all very rich, among the 1-2%. The NHL does not tolerate such behavior, but more ineresting is the fact they don’t have to – none of the NHL players ever try this crap. The NFL leadership needs to sit down with the NHL leadership and learn why.

Kaepernick played a large part in securing the #2 pick in this year’s NFL draft.

When Tim Tebow took a knee to thank God, he was mocked and ridiculed by the MSM/DNC axis and some NFL players.

When Colin Kaepernick took a knee in support of fake racism complaints and the murderous BLM terrorist movement he was lauded by the MSM/DNC axis and some NFL players.

That’s why the NFL is failing.

It just goes to show that losers lose off the field and on the field.

I’d be willing to bet if the truth were known the award doesn’t mean anything to Kaepernick either. Once he’s out of football and broke, that award won’t sell for much at all.

I watched few NFL games this year when I’m usually a big fan, but it had little to do with Kaepernick and his ilk. The primary factors for me were:

1. The interminable play reviews, loved by the NFL because they can run extra paid commercial ads. It slows play, and coupled with the interminable time outs at the end of the game, You begin to forget there’s an actual game being played.

2. I follow two teams, the Detroit Lions (where I was born and raised), and the Carolina Panthers (where I’ve lived since 1983). The Panthers were in the Super Bowl last year and out of the play-offs this year. They were hard to watch this year for a fan.

3. The Detroit Lions squeaked into the play-offs this year. The last time the Lions won a play-off game was 1992, a quarter century ago. The last play-off win before that? In 1957 when I was 2 yrs old, 60 yrs ago. A Lion fan does not get excited when the Lions make the play-offs. A Lions fan girds himself for disappointment and humiliation. I actually found myself rooting for the Cleveland Browns to win a game this season, to protect the Detroit Lions NFL record for futility, their 0-16 season of 2008.

I have to give the Leon’s credit Henry. They really made me get interested in hunting. Without them I may never have gone on to hunt with the passion I’ve had.
Earl Morrall, Harley Sewell and Yale Lary used to rent a house a couple blocks from where I lived. Really nice guys, especially Harley Sewell.

I once spit on Karl Sweetan’s back at a downtown International Festival.

One of the things that made Joe Gibbs an amazing coach is that he defied the conventional wisdom that to have a great team you needed a great QB. Theismann and his successor, Doug WIlliams, were both capable, but the reason they went to the playoffs & superbowl so many times in the 80s is because they were surrounded by exceptionally talented players at every position and had a coach that was determined to win every game.

So sure, I agree with Theismann that Kaepernick’s behavior isn’t exactly inspiring, but if a team is 2-14 and the QB is acting up on & off the field, you have to put the blame first and foremost on the coach, Chip Kelly. Thankfully that’s what the team’s ownership did, and he’s cleaning out his desk right now, making Kaepernick the new coach’s problem. And if the new coach is anywhere near as smart as Gibbs was, the QB will be the most replaceable spot in the lineup.

“To be able to stand up and have a difference of opinion and I agree with that part of it. But not when you are on the job”

The 49ers need to clean house. Probably half the team has to go. They are so bad that nobody will notice.

This is why I’m happy LT ended his career with his bone busting out of his leg.

Krap-er-dick gets paid millions to play a child’s game, and he complains about how bad America is. And he isn’t even a good player.

if he was living in most majority black countries in the world, he would be farming with a stick, scraping to get by, and dodging Ebola and histrionic mobs with machetes.