Immigration Attorney: There’s No Such Thing As Sanctuary Cities

Immigration Attorney: There’s No Such Thing As Sanctuary Cities

“It is fiction, political fiction” 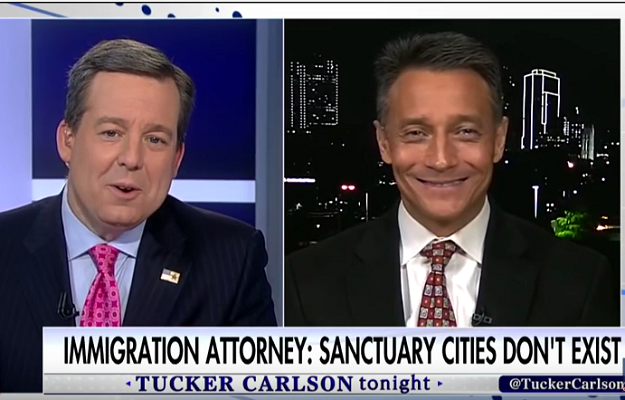 Immigration attorney Francisco Hernandez appeared on Tucker’s show to claim that there is no such thing as sanctuary cities, that they are “political fiction.”

To start the interview, Henry asked Hernandez how he could believe that there are no sanctuary cities in America despite numerous mayors proclaiming their jurisdictions as such.

“It is fiction, political fiction,” Hernandez replied. “The federal government can walk into any prison, jail, local authority and take anyone they want away.”

Hernandez’s argument centered around the belief that cities cannot protect illegal immigrants from federal enforcement organizations such as the Department of Homeland Security.

Following Hernandez’s answer, Henry presented a map showing all of the sanctuary cities throughout the United States.

“You can put pins on the map. It doesn’t matter,” Hernandez said as the map was displayed.

“Local officials in those cities will not give the Department of Homeland Security this information about illegal aliens who have been arrested, and thus they are not deported and can commit crimes,” Henry responded.

Hernandez started to laugh when delivering his response, which did not sit well with Henry.

“I don’t know why you are laughing, because they commit crimes in America every day,” Henry said of illegal immigrants.

No such thing as a “sanctuary city”? Mr. Hernandez should explain this to the Mayor of San Francisco … or to Kate Steinle’s family.

Well, he’s perfectly correct, of course; none of these cities can prevent the feds from operating in them, nor do any of them even try. The feds can and do routinely arrest illegal immigrants in these cities and deport them. Thus they are not actually sanctuaries; illegal aliens are not safe in them.

What these cities do, which is all they can do, is refuse to help the feds, let alone to do their work for them. That greatly hampers the feds’ ability to enforce these laws, since they don’t have enough resources to do it on any scale, and depend on local support. So illegal immigrants are safer in these cities than they are elsewhere. But “sanctuary” is hyperbole.

Ask your state rep or mayor… this is just a p/c term it has absolutely no legal meaning. There is no such thing as a sanctuary city and he laughed because it is laughable. If and when they decide to come down and finally do their job of rounding up illegals starting with convicted or incarcerated criminals there is no city in the U.S. that is safe period. Money has been the big problem they just do not have the man power to go pick up every illegal out there. The prison system right now has a 28% population of illegal immigrants that is almost 1/3 of all the inmates in the country. Trump wants to deport them all and hold their country responsible for them. This would stop the overcrowding and save the tax payers hundreds of millions of dollars. 1st they are not in jail for being illegal they are in jail for theft, rape, murder there are all kinds of illegal immigrants in jail and these snowflakes out there are saying but their family is here don’t deport them screw that ! They should have thought of that before they broke the law. How many of these snowflakes would still feel that way if they were a victim of one of these illegals ?