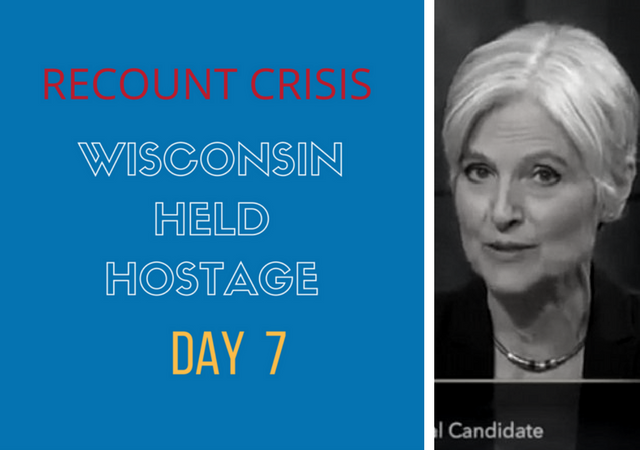 Clinton has picked up a few votes, but not enough to move the needle one way or another:

The latest results were reported Wednesday by the Wisconsin Elections Commission. It says all counties remain on track to finish their work by the state-imposed deadline of 8 :00 PM Tuesday.

In Wisconsin, 34 of 72 counties have completed their work and the others are all nearing completion. More than 2.1 million votes out of the nearly 3 million cast have been recounted.

According to the Milwaukee Journal Sentinel, “Clinton has picked up 492 votes so far in the recount, but has gained almost no ground since Trump himself gained 410 votes in this new tally and led by 22,177 votes going into the recount.” Stein has picked up a grand total of 60 votes or roughly $58,000 per vote seeing as she forked over $3.5 million for the recount.

So this is just a transfer of wealth from Jill Stein donors to people who count ballots? More recounts, please!

I’d say it is more of a transfer of money from Hillary voters to the States/vote counters.

Jill raised what? 3 Million for her entire campaign, but almost 7 mil for the recount? Those aren’t her voters throwing that level of money around.

Glad to see the Dem house of cards get blown down, though.

I love Spotted Cow! I bring back home whenever I visit. Silly they won’t sell the beer outside of the state…

They will be done by Friday. And Trump will still have won Wisconsin. Game over

Poor Jill. On a clear day I can see the Fonz, wearing his skis, way, way out in the blue….

That’s not the Fonz. That’s Laverne and Shirley.

Sorry, pal: they are not going to make up 22,000 votes from that area. It is indeed over

They never believed WI was in play so no one thought to stash boxes full of “just in case” ballots in case they were needed .

Hillary Rotten Clinton fades into just another bad memory – but hopefully not from the memory of the Sessions justice department.

There is 6 BILLION dollars missing from the state department during Clinton’s time running it. Did you hear that, Mr. Sessions?
http://dailycaller.com/2016/10/20/the-6-billion-clintons-state-dept-lost-was-not-debunked/

SHRILL and JILL went up the hill

to fetch a pail of ballots