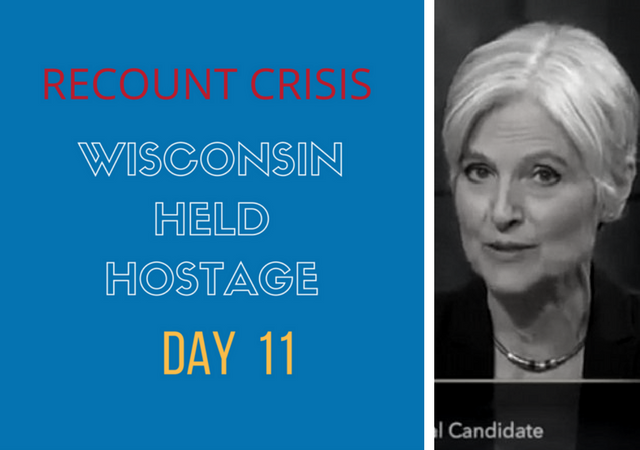 The Wisconsin presidential election ballot recount is winding down.

With a completion deadline of December 12, most counties are finished recounting their ballots.

According to the Wisconsin Election Commission’s spreadsheet, with the exception of Milwaukee, which counts its absentee ballots differently, most other counties have completed their recounts:

Heavy has the overview:

Hillary Clinton has only reduced Donald Trump’s lead by several dozen votes in the days of recounting, nowhere near enough to alter the election. Trump won Wisconsin by more than 22,000 votes. Green Party nominee Jill Stein paid at least $3.5 million in donated money for the recount.

The latest spreadsheet released December 11 shows that the City of Milwaukee’s totals still have not been fully updated to include absentee ballots, even though the Milwaukee County Clerk told the news media the recount was completed on Thursday, December 8, and only minor changes were found. That leaves Milwaukee as pretty much the last lingering mystery before Wisconsin can shut the lid on the 2016 presidential recount.

The county specific breakdowns are here:

The December 11 spreadsheet shows that, in addition to the City of Milwaukee, only these precincts have not yet been reported to the state:

Clark County – ward 8 in the City of Stanley. (But this ward only listed 2 votes during the original count, one for Trump and one for Clinton).

Dane County – 5 wards in the City of Verona. (Trump received 371 and 563 votes in the first precinct and Clinton received 801 and 1,455 votes.) Dane County told local news stations that it had completed its recount, and the Election Commission retweeted one of those accounts. However, these wards are still not listed in the day 11 spreadsheet.

Milwaukee County – wards 3-9 in the City of Glendale. (Trump received 429 votes and Clinton received 852 in these wards in the original count).

City of Milwaukee – still not updated with absentee ballots, according to the Election Commission. The returns appear in the spreadsheet but they still show deficits because they are not complete.

Portage County – Town of Carson. (Trump had 493 and Clinton had 292 votes in the original count.)

Racine County – City of Racine ward 36 (Trump had 164 votes and Clinton had 415 in the original vote count.)

New York offers advice on how to conduct a recount:

But as a general rule, there shouldn’t be any harm in looking to see, and here New York can offer the country lessons.

Lesson 1: Use paper ballots, fed through scanning machines, for all elections, unlike the paperless ATM-style systems in much of Pennsylvania and areas of Wisconsin. A paper trail is critical when results are called into question.

Lesson 2: Program all scanning machines to retain a photographic image of every paper ballot, then make the images freely available to anyone who wants to see them. Ideally, the images would be posted on the Internet — showing the ballot and how the machine counted the vote. This way, a harmed candidate can use the evidence to seek court intervention and, if warranted, a hand count of the paper ballots themselves.

Lesson 3: Set a fixed standard for an automatic hand count. In the city, when a race is 0.5% apart or closer, it kicks in. That need not be the magic number for the whole country, but every state should choose its own.

Main thing: Elections are where voters choose their leaders. Let them shine a light on their handiwork.

New York makes a good point. Let’s add to this —

1) Photo ID. A voter ID with a signature, color photo and address is provided to you at the time of voter registration. No payment or fee required, so no excuse. You bring it to the polling station when you vote. No ID? No vote. Change your address? Just like a driver’s license, you update your voter ID.

2) Proof of citizenship required. When you register you prove your citizenship. That’s noted on the voter ID.

3) Purple dye. To put your paper ballot in the optical scanner you must dip your pinky finger into the purple inkwell. You’re done voting for that day even if you’re a Democrat.

4) Rigorous review of voter lists every year. Every state is required to update and purge voter registration lists.

5) Central data repository for death, as for birth. When a person is born the federal government is informed (that’s how you get a SS number), and the states know of the birth. There’s no such mechanism for death. That leads to ghost voting. Require each state to records deaths in a central registry to be shared amongst all the states.

Polling place security. Have a guard armed with wooden stakes and a mallet. Drive a stake through the heart of every dead voter who shows up. Can’t have vampires and zombies stealing elections.

New York makes a good point. Let’s add to this —

5) Central data repository for death, as for birth. When a person is born the federal government is informed (that’s how you get a SS number), and the states know of the birth. There’s no such mechanism for death. That leads to ghost voting. Require each state to records deaths in a central registry to be shared amongst all the states.

You do not automatically get a SS number at birth you must apply, or more correctly your parents must. In my day you would go down just before you got your first job, but these days most are done at birth. There is a death registry with the government just no coordination with the birth records or SS records.

There is a centralized repository for deaths… it’s called the “Social Security Death Master File” and is subscribed to by all the leading commercial data providers (credit bureas, marketing data companies, etc.)

A reasonable process would be for every state to conduct an annual purge of their voter rolls to deal with people moving out of state and deaths. But what happens is progressive groups cry and moan every time a state attempts this and the process winds up getting bogged down or stopped in court.

Thanks Kemberlee for keeping us updated on this. Much appreciate your work here.

There are major stories here but none that interest our incurious press. Where Stein gets her money, who are the top contributors, and HRC’s precise role in this grift top the list.

If Stein raises funds for a stated purpose which then fails, could a contributor demand a refund, and failing that sue for conversion, fraud and misrepresentation?

“If Stein raises funds for a stated purpose which then fails, could a contributor demand a refund, and failing that sue for conversion, fraud and misrepresentation?”

This was my question regarding contributions to the Sanders challenge to HRC. As the backroom emails showed, the DNC had already taken steps to insure that Bernie was not going to be the candidate, but nothing was done to alert sincere supporters that they were wasting their time and money since they were contributing to a candidate whose road to the ticket did not really exist.

The only defense for her is that she has been pumping the “confidence in the system” song and dance as the basis for the count. She acts all confused when it is pointed out that only the three states that had the right combination of electoral votes and result margins were challenged.

How about eliminate same day registration? Require registration 15 days before the election.

Enforce the law about the secretary of state notifying previous state of a new motor-voter registration. In January 2011 I moved from Wisconsin to Iowa. In July I moved to Colorado. I was then registered in all three states. Becoming unregistered in Iowa and Wisconsin required work on my part. I recently moved to Texas. I did notify the county clerk in Colorado and was sent a form I needed to complete and return to become unregistered in Colorado.

I had someone ask me why I opposed “same day registration” my answer was this.

Steve, you are assuming that NE liberal Demorats WANT a fair and honest election. Nothing could be further from the truth. I’ve lived in the South all of my life and it is so common here for the “Churches” and “public aid” groups to offer buses with fried chicken and beverages for anyone who wants to vote for their candidate. I know this may not be illegal but it is certainly unethical. Photo IDs are so logical that it makes no sense that they would oppose them. Proof of citizenship to get the ID makes sense too. If it were up to the Dems they would let anyone vote including the dead.

Hillary just was not inspiring enough . Too many loyal Democrats stayed 6 feet under.

I have never seen such childish caterwauling by supposed adulsts. The Democrats just want a do-over or they will take their ball and go home.

Recount over. Trump +131. Results to be certified soon.

LOL, I hoped this would be the outcome, that Trump would win by even more votes. Love it!