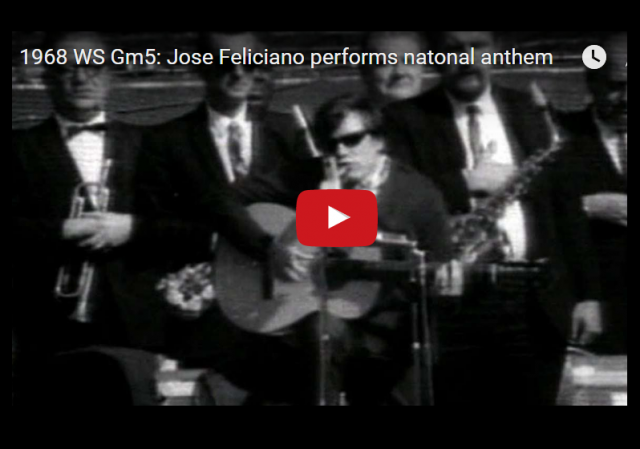 Mary posted yesterday about how Jackie Evancho has come under liberal attack, but also has seen her Album Hit #1 after it was announced she would perform at Trump’s Inauguration.

In preparing a future Jose Feliciano line-up for Video of the Day sometime in the future, I found this performance at Game 5 of the 1968 World Series.

I remember that series (Detroit versus the Cardinals — I was a Cardinals fan), but I don’t remember this performance.

It’s a fantastic rendition, different, but in a good way.

I had never heard this rendition by Jose Feliciano. While it irks me that it has become a practice by many celebrities to sing our national anthem as if it was their own, I do appreciate Feliciano’s version.

A side note: “On May 10, 2010, Feliciano performed his rendition of “The Star-Spangled Banner” at Comerica Park in Detroit. This was part of the remembrance of Detroit Tigers radio announcer Ernie Harwell, who had died the Tuesday before. He played it similarly to the way he had in 1968 with his acoustic guitar and his slow tempo-ed, Latin jazz style.”
Source: https://en.wikipedia.org/wiki/José_Feliciano