You keep it classy, political journos 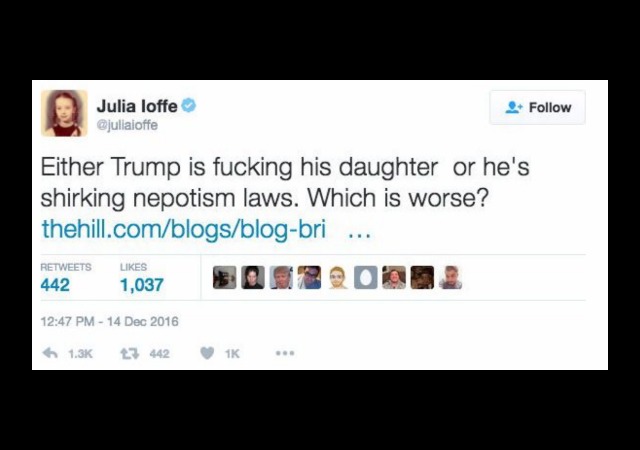 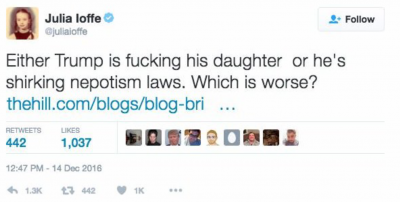 Ioffee’s tweet included a link to a post from The Hill, discussing Ivanka’s White House office space. Reports suggesting Ivanka would office in an area traditionally reserved for the first lady were rebuffed by the Trump camp who called the rumors “false.”

Ioffe had eight days remaining on her Politico contract before moving to The Atlantic.

The Atlantic doesn’t appear concerned by Ioffe’s off-color comment and publicly expressed their confidence the embattled reporter will adhere to their social media guidelines.

She’s going to The Atlantic?

Heck, with that kind of liberal resume enhancement, she should be able to go straight to the NYT!

Because – at the Atlantic their standards are flexible regarding false allegations of Child Sexual Abuse.

Change the target to Barry “The Black Baby Jesus” Obama and the media would be all over this like a fat chick over a packet of smarties!

Hopefully that is true – not “fake” news. About time there are consequences for vile behavior.

What a vile, nasty, despicable creature!
It deserves what what ever comes It’s way!

We all knew the lefty’s would self destruct and we see it happening everyday!

Note: “Ioffe had eight days remaining on her Politico contract before moving to The Atlantic.”
Fired? What a damn joke!!

funny definition of fired.
expediting a moving to another employer process by 4 days or so is damn sure not firing.

meant to type 8 days not 4 fat fingered it, sorry

So what else would you expect them to do? What else can they do to her?

“The Atlantic … expressed their confidence [that Ioffe] will adhere to their social media guidelines.”
And those “guidelines” are … ?

She is a vile person. I still remember her column in the New Republic, urging blacks to riot and loot (and to ignore civil leaders, such as the celebrity rapper Nelly, who were telling protestors to protest peacefully).

Um, yes. There is an anti-nepotism law, and, unlike the conflict of interest law and the foreign presents clause, it does apply to the president.

Can you link that law? I’d like to see how it’s worded and who sponsored..

Tasteless is as tasteless does ~

Print, online and video publications are responsible not just for the behavior of their employees while they are employed, but also for the past behavior of those they choose to employ.

Another fine example of why alcohol and Twitter don’t go well together.

I don’t understand what the big deal would be if she did have an office in the first lady’s section, or even if she officially took the role of first lady instead of Melania. It’s not as if the first lady has to be the president’s wife. Several presidents have had their daughters or sisters as first lady, and nobody suspected any funny business.

The real “funny business” took place while the wifey wasn’t looking and the media refused to see.