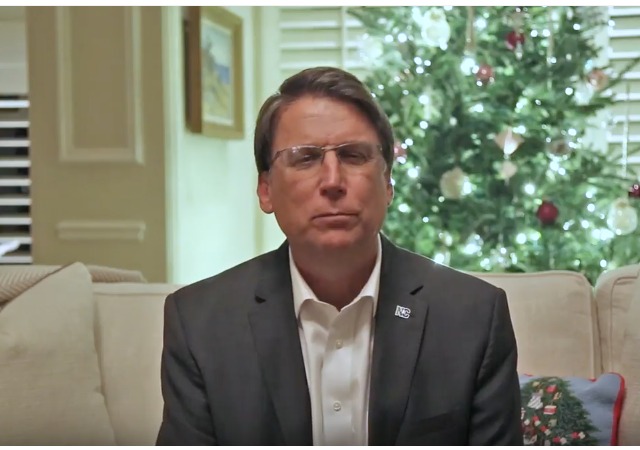 “I personally believe that the majority of our citizens have spoken, and we now should do everything we can to support the 75th governor of North Carolina, Roy Cooper,” McCrory says in the video. “The McCrory administration team will assist in every way to help the new administration make a smooth transition.

“It’s time to celebrate our democratic process and respect what I see to be the ultimate outcome of the closest North Carolina governor’s race in modern history.”

McCrory has become the first sitting governor of North Carolina to lose reelection.

After Election Day, no one could call the race because only 5,000 votes separated McCrory and Cooper. Republicans then filed a protest over potential voter fraud on absentee ballots in Bladen County after officials noticed the signatures of the voters and the absentee witnesses appeared similar. The party also filed a protest in Durham County due to massive problems on Election Day.

McCrory reached out to the State Bureau of Investigation about the probe in Bladen County “after the State Board of Elections dismissed a protest calling for those ballots to be thrown out.” Durham County officials plan to finish the recount Monday afternoon, “but early results from the recount showed virtually no change in the vote tally there.” The State Board of Elections unofficially has Cooper up by 10,000 votes over McCrory.

The board will meet later this week to officially certify the win.

“I want to thank Governor McCrory and our First Lady Ann McCrory for their service to our state. Kristin and I look forward to working with them and their staff in what I expect will be a smooth transition. I’m proud to have received the support from so many who believe that we can come together to make a North Carolina that works for everyone. It will be the honor of my life to serve this great state. While this was a divisive election season, I know still that there is more that unites us than divides us. Together, we can make North Carolina the shining beacon in the south by investing in our schools, supporting working families and building a state that works for everyone. I’d like to thank all of the hardworking families in North Carolina, and I look forward to serving the greatest state in the country as your Governor.”

McCrory won the governor’s race four years ago by a decent margin, but different bills have bogged down his popularity in North Carolina. He took a major hit with the HB2 law that forces people to use the bathrooms that match their biological sex. The law caused massive outrage with celebrities, companies, and sporting events boycotting the state until the government reverses the law.

However, Cooper will not have a free for all when he takes office since “Republicans hold veto-proof majorities in both chambers of the legislature, making it difficult for him to push his agenda — or stop theirs.”

Something not right here. The entire NC GOP slate won big – except for McCrory. The only thing I can think of that McCrory did that might make NC voters single him out is signing HB2, concerning who can use which public bathrooms. But if that’s why, how come nobody else involved with that bill was singled out? Something fishy, I tells ya.

Because majorities in their districts support the bill. The majority overall apparently doesn’t.

The voters that were pissed about the state requiring those with penis’s to use the bathroom designated for penis holders would have voted D anyway.

Support for the I-77 toll road played a large part in his defeat I believe.

Allowing the polls in the Triangle to stay open extra late is what cost McCrory this election. Of course in the greater scheme of things he was done in by the Bathroom bill.

I have yet to find a NC citizen who’s against HB2 and can explain what it does and does not do. Usually they tell me they’re not sure of the details, but they know they’re agin it.

To be fair, a lot of its supporters don’t know what it says either. There was a lot of misreporting that gave the false impression that this applied to privately-owned facilities, and dictated to them whom they may or may not allow in. Some people apparently think that’s an appropriate thing for the state to do.

I’m not convinced it was HB2 which sank McCrory, given that the conservative Lt. Governor was re-elected by a large margin, and the legislature which passed it remains a veto-proof Republican body. I saw an analysis shortly after the election pointing out that McCrory finished behind his margins from four years ago in the corridor along I-77, where he supported turning it into a toll road against local opposition. He was always a moderate, and so is Thom Tillis. Ignoring the constituency and stuffing a toll road down their throats wasn’t a great idea.

I thought of that, too, Ms. Kate, and I’d be mad too if McCrory wanted to place toll roads in my end of the state, but would that be enough to make regular GOP-ers vote for Roy Cooper of all people? So, it just seems fishy to me to have such a surgical loss, just the one GOP guy out of hundreds, albeit the top GOP guy.

They wouldn’t have to vote for the Democrat, just not voting for Governor could make for the 5,000 vote loss.

Didn’t read down before commenting above. The number of people pissed and not voting McCrory over the toll road issue should not be discounted. I am absolutely certain they number over the 10K he lost by. If you live a couple miles from that boondoggle, you would know just how ticked people were. I was tempted myself, but chose McCrory anyway. I know quite a few that did not vote for him.

The analysis said (and I wish I could find it to link; can’t) that along I-77 there were perhaps 30,000 more votes for Trump than for McCrory. They didn’t necessarily vote for Cooper; they just left the governor slot blank.

I live two miles from the construction. It’s anecdotal, but I can guarantee McCrory lost a bunch of votes here. People were/are ticked about it, myself included. I just didn’t hold McCrory responsible.

Thing is, Cooper, being a tax-anyway-you-can-get-it uber liberal, is just as much for the toll roads as McCrory, if I recall correctly.

No doubt. As ticked as I was I still had the sense to not let a single issue decide my vote. Cooper is worse in every way. He would, I’m sure, like to put a toll on breathing.

But, I have no doubt, the I-77 toll lane lost McCrory the election. I’ve never met a single person for the toll lane. I also have no doubt that the normal R voters that said FU to McCrory are happy with the outcome (I’ve heard this several times). Sometimes it pays to listen to the people.

As a follow up for future readers, McCrory did lose big in the two counties surrounding the I-77 toll lane project:

“Here’s a telling statistic Susan Myrick of Civitas has culled from the preliminary election results: In those two counties, McCrory received almost 19,000 fewer votes than his own lieutenant governor, Dan Forest. That right there was enough to sink McCrory’s campaign.”