If the very professorial Obama is so thoughtful and in-depth, how did he get so many things so wrong? 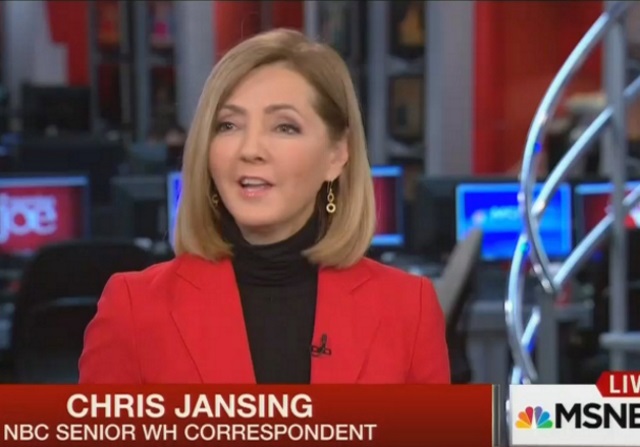 Then why did Barack Obama get so many things so wrong? That’s the question that inescapably arises in response to the claim by NBC correspondent Chris Jansing on today’s Morning Joe that Obama’s decision-making style is “very professorial, thoughtful, in-depth.”

Jansing said that Obama and Trump “could not be more different in the way they approach problem solving,” describing Obama admin concerns about Trump’s supposed “shoot-from-the-hip” style. Mike Barnicle weighed in to wonder whether Trump would be up to the task of comforting the nation after tragedies such as the Newtown, Connecticut school shootings.

But back to Professor Obama, and his thoughtful, in-depth decision making. So then, how did he get so many things so wrong, from Obamacare, to the Iran deal, to the withdrawal from Libya that spawned that “JV team,” ISIS?

Note: Jansing reports that Obama thinks he’s done a “great” job on the economy. Really? Slowest recovery in modern history? Record numbers of people out of work and on food stamps? Wonder what a lousy job would have looked like?

MIKE BARNICLE: Chris, do you think that part of what’s going on here—it’s hard to nail it down authoritatively—but part of what’s going on here is the president’s instinct, his worry, perhaps better phrased, his worry is that Donald J. Trump, is he up to the moment of being President of the United States, not just standing with Abe [at Pearl Harbor]. but these catastrophic things that occur in this country when a president and only a president can speak to the nation to calm the nation about things like that?

CHRIS JANSING: I think there’s very little doubt about that. I mean, when you see this series of statements by the president, I think there are two things going on. One is, you don’t get to be President of the United States without a healthy ego. And so, like every other president, he believes that he did a good job, in fact he thinks he did great job on the economy and some other things. But yeah, there is another aspect of this.

They could not be more different in the way they approach problem solving. This is a president—and we’ve seen it, anybody that works in the White House has seen it, talked to his aides about it—he approaches things in a very professorial, thoughtful, in-depth manner. He somebody who believes in reading everything, in absorbing a lot of things and having that sense of history. And there is a real concern by the president and by the people who surround him that this is not a serious man. This is not someone who considers the larger implications. Not just the historic implications but the larger implications of what’s going on in the world right now and that the shoot-from-the-hip kind of attitude goes against everything Barack Obama has always believed and the way he’s performed as a politician and as a president.

BARNICLE: It struck me the other day, I was driving through Connecticut and on 84 and you pass through Newtown, and I was thinking about the President of the United States addressing the nation after that horrific, horrific murders in Newtown of children. And you wonder, your mind wanders and you wonder is President-elect Donald J. Trump up to that task?

WILLIE GEIST: I think that address certainly would have been a lot different. Perhaps less emotional with a President Trump.

Yes, there is a distinct difference in style of decision making. Trump, who has amassed immense wealth with his life-time of decision making, has had a lot of practice at making decisions and taking responsibility for them. Clearly he does that well because otherwise he would not have become as wealthy as he is.

Obama, on the other hand, is a ditherer. If he looks “thoughtful” it is because he does not actually know how to make a decision, never mind take responsibility for it. His errors are, after all, all Bush’s fault.

Something tells me this talking airhead doesn’t know squat about making decisions or taking responsibility for them either, which is why she mistakes Obama’s dithering as “professional.”

I suppose nobody is yet willing to say that it’s just possible that Trump has been gathering information and thinking strategically for a long time. That practice tends to cut one’s reaction time.

Obama, however, is intellectually shallow and lazy. He has been stuck at amateur level the whole time.

And we know that that says about this ignoramus, Jansing.

“this is your brain on drugs!”
A whole administration that is brain addled.

Another moron of the press establishment.

A judge says more about the judge than the judged when making a judgment. What is the standard or criteria used by the judge? Jansing is simply broadcasting her broad based ignorance.

How about some vague yet loaded terms:
– professorial, thoughtful, in-depth manner
– shoot-from-the-hip

Let me add dishonesty to the ignorance on display here.

“..and I was thinking about the President of the United States addressing the nation after that horrific, horrific murders in Newtown of children.”

Wow! What a blatant lie, Barnicle. You thought no such thing. But tell us about getting fired by the Boston Globe for being a liar, Barnicle. We like that story.

Trump has been thinking about running for President since Chris and Obama were kids.

He did such an awesome job of speaking to the nation er sorry to the thugs in Ferguson.

The tongue bathing is strong in this one…

This is just another variation of the “Democrats smart, Republicans stupid” attitude. Hillary was the smartest woman on Earth (but she couldn’t figure out that she should campaign in the places where she needed electoral votes). Obama is so smart, being president is almost beneath him (which is why he can’t be bothered to actually do the job, apparently).

For 8 years under Bush, liberals relentlessly insulted and joked about his allegedly low intelligence. The next 8 will be at least as bad for no other reason than it makes them feel good.

Zero is as “calming” as a visit from a weird kleptomaniac old aunt. You’re never sure what kind of crazy crap is going to come out of her mouth, and you have to count your silverware every night after she goes to bed.

A room full of hopped-up kindergartners would be more calming than Zero.

Ms. Jansing went to Oberlin, so she’s smart. If you don’t believe it, just ask her. But she doesn’t know squat.

It’s going to be great to watch her silly little made-up world implode over the next few years. President Trump will not kowtow to these snowflakes; he’ll go right for the jugular.

He did it today—”Doing my best to disregard the many inflammatory President O statements and roadblocks.”

That’s about as clear as clear can be. You want to play? The Donald will play.

What fun it’ll be to see POTUS slam NBC, or the NYT, or the WP, etc., etc. for their blatant commentary masquerading as “news.”

Obama “very professional, thoughtful, in-depth”. That only describes Obama’s P/politics. He is incompetent on the domestic & world stages. A junior Senator from Illinois and a recipient of affirmative action. Chicago Jesus is a dud! Economic recovery? Econ 101 used to fulfill a general requirement.

First of all, do not make the mistake of thinking that Obama got ANYTHING WRONG. There is a sizable body of evidence that President Obama’s decisions were clearly made to advance a particular agenda. And, to lower popular repercussions from these decisions, he either concealed information or misrepresented it.

Assume for the moment that Jansing is correct about the decision making styles of Obama and Trump. Obama does seem to ponder and procrastinate when making a decision. Trump, on the other hand, comes to a decision quickly and makes this known just as quickly. However, at this point there is no evidence that Obama’s decisions are any more “correct” than Trump’s.

It appears, at this point, that there is more than just a difference in style, between Obama and Trump. There appears to be a fundamental difference in goals and objectives.

Don’t give him so much credit. If he was smart, he’d have accomplished his malignant goals.

The bozo had EIGHT years to do it. And his final act of choosing Hillary Clinton to further his goals demonstrates what a putz Jimmy Obama really is.

I seem to recall, from Scott Adams blog, that Donald is much more likely to make quicker decisions likely due his business background.

You can’t sit around all day trying to find every little scrap of info or you’d be out of business. You take the best info you can, decide and adjust as needed further down the line.

Politicians though do sit around waiting until the very last minute. Mostly because they don’t end up on walking the front line for their bad decisions. Someone else pays the price and the politicians spin their lies as much as possible.

Hmmm. “Comforting the nation”? The President as Sob-Sister-in-Chief? What a weird idea.

I seem to rember some in-depth reporting into the Obama administration’s decision process. In the WaPo, maybe?

I seem to recall it involved his staff writing a one-paragraph summary of three options and checkboxes at the bottom for Obama to mark an option.

Correction: It was the New Yorker.

This is really quite a distilled and concentrated pile of weird ideas.

I’d like a little more detail about how the man who “approaches things in a very professorial, thoughtful, in-depth manner” so consistently managed to be caught by surprise by things he didn’t know about until he saw them on TV news.

It’s also clear that Trump’s purported “shoot from the hip style” is exactly why he’s already a major factor in both domestic and international politics before he’s even sworn in.

Obama has to go consult his buddies for how to react and get something prepared for him to read…that’s the difference.

Obama is professional at caving to terrorist or tiny insignificant countries around the world!

“…he believes that he did a good job, in fact he thinks he did great job…”

So, besides the massive ego, being seriously detached from reality is an important qualification for the office of president?

We can only wonder if he’s gearing up his ‘professional, thoughtful, in-depth whatever it is to finally prepare the world for the truth that Michelle is a man.

I had no idea liberal media was slanted in favor of Obama.

“Obama decision making” = Obama golfs while Valerie Jarrett makes a decision, then he later reads her decision off a teleprompter.

Who cares about decision making process when the result is always wrong?

The collective left is already suffering from separation anxiety.