Muslim student’s claim that Trump supporters attacked her was HOAX

Muslim student’s claim that Trump supporters attacked her was HOAX

“We dedicated a lot of resources to this.”

A Muslim woman who attends Baruch College recently claimed that three drunken men attacked her on the subway and pulled at her headscarf while yelling “Trump.”

Now she has been arrested after admitting she made the whole thing up.

She made it all up — and now she’s under arrest.

The Muslim college student who claimed she was harassed on the subway by three men who shouted “Donald Trump,” called her a terrorist and tried to rip her hijab off her head has admitted to detectives that she concocted the entire story, the Daily News has learned.

Yasmin Seweid, 18, has been charged with filing a false report, a police source said.

Seweid had numerous opportunities to admit the incident never happened but again and again stood by her story, the source said.

On Wednesday, after again being confronted with questions from detectives increasingly suspicious of her story she recanted and said she made it all up, citing family problems.

The police source said criminally charging her was appropriate.

“This isn’t something we normally like to do but she had numerous opportunities to admit nothing happened and she kept sticking by her story,” the source said.

“We dedicated a lot of resources to this — and don’t get me wrong, this is what we do — but we had guys going back and forth, looking for video and witnesses. And we couldn’t find anything.

Liberal media, always willing to promote such a narrative, ran with it when she first made the claim:

In the case of BuzzFeed, they have since issued an updated report but see if you can spot the difference between their two headlines. 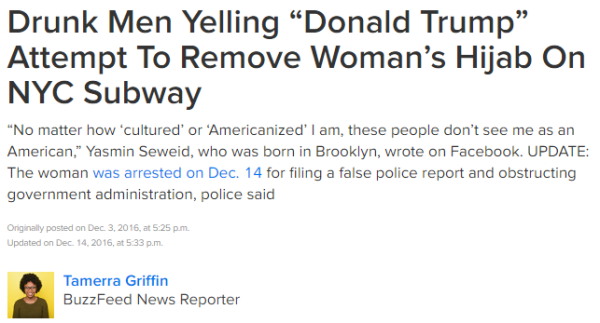 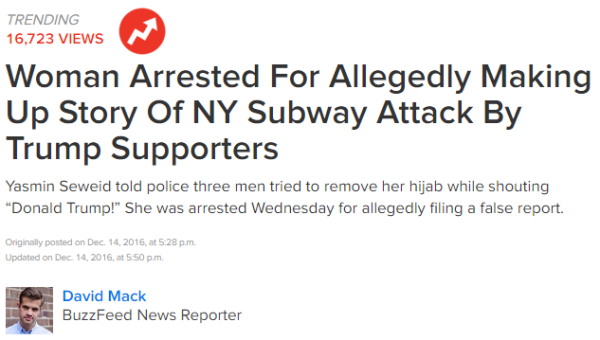 Twitchy collected some reactions to this:

.@BuzzFeedNews oddly, the word “allegedly” does not appear in your first story about this last weekhttps://t.co/xHkZDp6NXB

Buzzfeed is more skeptical that she made up the story than the initial report. Amazing

I have been drunk before in my lifetime but at no time can I imagine taunting someone by yelling out the name of a president-elect! What would it mean? “You are a slimy muslim”, Donald Trump”, “Donald Trump”. What does that tell anyone? How about “You are a muslim peanut brain”, “Jimmy Carter”, “Jimmy Carter”. It should have been seen as a hoax from the beginning.

She’s a pretty girl. Maybe if she stopped all the racism toward Trump supporters, one of them would make a respectable woman out of her.

Sometimes “beauty” is only skin deep.

Maybe she was confused and thought it was called Barack College 😉

Um, why not? It’s a city college, she lives in the city, why wouldn’t she go there? Do you think all Moslems are so antisemitic that they’d refuse to attend a college just because it’s named after a Jew?! Do you think they also boycott LaGuardia airport, for the same reason?!

She’s obviously twisted enough to make a false claim of a assault motivated by considerations of religion and politics, making her seem concerned about such matters, so yes, it does seem like something that should concern her.

Lighten up, Francis. It was funny.

Republicans generally have too much to lose to involve themselves in such low-level stupidity.

This story made no sense to real New Yorkers and was bound to raise cop radar. Republicans a few and far between in New York City. The chances of finding three drunk Republicans on an MTA subway are very small.

LOL, good point. The cops had to know it was false from the beginning.

So, is what she attempted an act of jihad? After all, we’ve been told that jihad is a religious duty and that it need not be violent.

Um, no. She’s not exactly the religious type. She was out drinking with her friends, which is why she made up this story to explain to her father why she was late coming home. And she’s got a Catholic boyfriend.

To correct an earlier post of yours, I don’t know either if she would avoid LaGuardia, but it would not be, as you imply, because former Mayor Fiorella LaGuardia was a Jew. According to his official biography he was born Roman Catholic.

Millhouse: Permit me to retract my correction of your LaGuardia reference. He was not born Roman Catholic. His father was a lapsed Catholic and his mother was Jewish.

And he spoke fluent Yiddish. Even once offered to debate an opponent in that language. The Little Flower was a Yid and made sure all the Yidden knew it.

Read the whole article – her parents are another multicultural success story whereas she assimilated to the point where she can now hurl false accusations against conservatives like a brainwashed liberal native. Maybe she can get a cell near Crystal Mangum (of Duke Lacrosse fame).

is it only me that sees and hono killing in her future?
booze, infidel boys, and shaming the family?
allah must be really pissed off