“We ought to have permission to have a conversation on a return on our investment too,” 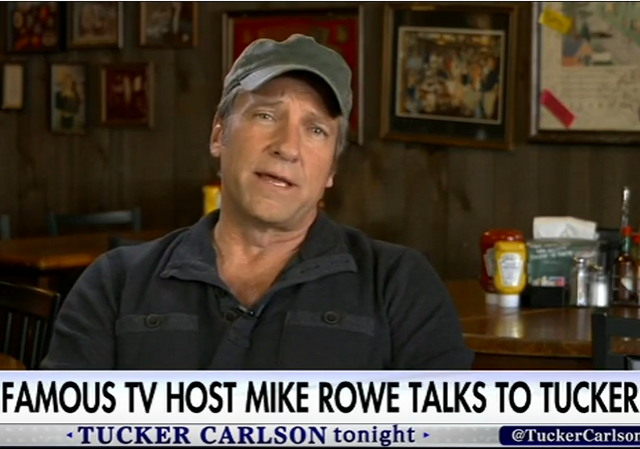 Their conversation began with the social justice warrior from Hampshire College who recently appeared on the show but quickly moved on to other topics.

One of the most fascinating aspects of their discussion was when Rowe brought up the massive amount of student debt in America today and pointed out how that affects all of us, not just students.

Old Glory was taken down from a flagpole and burned around Veterans’ Day and Daniel Vogel defended the flag’s removal to protest discriminatory behavior in America and to show his support for perceptively underprivileged workers.

“Nobody’s disputing the right to do any of this stuff,” Rowe said, asking rhetorically whether it was persuasive to desecrate a symbol that so many people care so much about.

Reacting to Vogel’s mention of tradesmen and policy that encourages young people to attend expensive four-year institutions to attain a degree, rather than seek a trade, Rowe said it was simply a matter of public perception.

While politicians tend to say a “four-year degree is the best path”, “after 40 years, we start to believe it,” Rowe said.

“We ought to have permission to have a conversation on a return on our investment too,” he said of public funding of undergraduate students at such institutions as Hampshire.

Rowe has been in the news lately for speaking out on the flag issue.

Former “Dirty Jobs” host Mike Rowe had some frank words for students who attend expensive colleges and then trample the American flag to protest oppression.

Mr. Rowe took particular aim at university President Jonathan Lash, who explained at the time that the decision to remove the flag would allow the school to “focus our efforts on addressing racist, misogynistic, Islamophobic, anti-immigrant, anti-Semitic, and anti-LGBTQ rhetoric and behaviors.”

“I couldn’t help but wonder if President Lash was unaware that billions of people around the world are routinely subjected to horrific levels of racism, misogyny, and bigotry that far exceed any injustice in modern-day America,” Mr. Rowe wrote. “Furthermore, I was curious to know if President Lash really believed that removing our flag is a better way to assuage the fears of his frightened students, than simply educating them about the undeniable fact that no country on the planet affords its citizens more liberty than this one?

There ought to be a “dirty job” for Mike Rowe in the Trump Administration.

I would much rather have had him as Secretary of Labor than the burger guy Trump picked.

That or better, Secretary of Education.

We are into the second generation of indoctrinating the youth of America that doing actual work is a bad thing. Getting dirty or tired is something someone else should do. Send your kids to college so they can become political scientists, social workers, etc, and then welcome them bact to live in the basement because there is no job in their chosen field for them.

While the kid who learned to weld, or rebuild motors, or build houses has been working those 4 years, earning money, the student has been amassing debt. Why can’t we stimulate the kids to learn to actually do something and be proud of their contributions. Not to mention that carpenters, electricians, plumbers, truck drivers, etc make a pretty decent living.

Maybe LI could find a way to get Rowe’s blog linked in, or have him pen the occasional post.

I flunked out of college…..I got a job in a factory, hated it! I cried the first night “I’m not supposed to be here!” I WAS the definition of snowflake in 1985. Fast forward to 2016……I am an Equipment Service Associate at a major German auto manufacturer here in the upstate of SC. I have a six-figure salary with excellent benefits (my health insurance costs me NOTHING!). I never went back to college……I earned my position and yes, I did build my existence!

Mike Rowe has always been a voice of sanity.

Just from a financial point of view. If you have to spend/borrow nearly a quarter of a million dollars and a take four years out of your life. College may not pay off vs spending those four years earning money in a trade which will pay you maybe 200,000 in those four years.

The college grad is a half-million dollars down before he even gets started trying to find a job.

I know those are rough numbers, but I’m sure you see my point.

Now *that* would be an interesting SecState nomination. 🙂

I own a small remodeling company. The most glaring fact I’ve noticed, is the public schools don’t teach these kids how to think. Most of these “kids” don’t even know they should think. Their approach to work is similiar to a Roomba, one of those automatic vacuums. They start in a random direction and continue until they hit an obstacle. Then they back up and head in another random direction. Never considering a best path. I would say over 905 of all the workers I’ve had function in this way. You don’t have to be super intelligent in this world to be successful, it mostly requires mental discipline and a little effort. We have let our kids down.

Intelligence and academic achievement often overlap but seem by no means identical.

Getting my kids through school, I was dismayed at the number of multiple-choice tests that they were given. While the associated optical scanning makes grading easier, multiple choice testing creates an atmosphere that education is largely prep for a trivia contest. Anybody can memorize and spout back a list. Being able to understand and actually do something with that list is a huge missing aspect for too much of today’s education.

A Roomba! I love it. None of the students even want to be there either – zero interest in what they’re learning for the most part.

Mike Rowe is a BSA Eagle Scout. His responses to Scouts that were doubting the worth of achieving the same are classic:

When needed a plumber is worth a thousand Gender Studies graduates.

The world’s “glass” is nearly empty of human rights but for the Left….Americas overflowing glass of liberty and human rights is never enough. They are too short sighted to see the plight of many of the world’s population and too selfish to really care.

I retired from medicine a few months back. Now I am a student again at the local tech school. Machining, CNC, 3D drafting. It’s great stuff. I also coach a high school FIRST robotics team. Our motto “Every kid should know how to write code and operate a plasma cutter”. Even in that world we are outliers. Judges come around to look at our robot and always ask who did the welding and cutting. “Oh, we did it. Dr.________ couldn’t do work this nice!” Tacitus

Mike Rowe simply “gets it.”
He’s a great man, and spins a convincing argument without talking down or appearing arrogant or aloof.