The emotionless, robotic repetition of ‘anti-imperialist’ talking points reminded me of Soviet bloc students I met in Moscow. 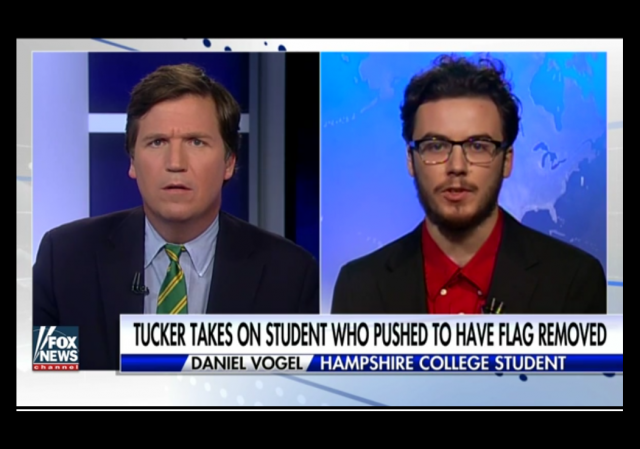 If you haven’t been watching Tucker Carlson’s new 7 p.m. show (Greta’s old slot) on Fox News, you really need to. He’s in his element, as was demonstrated in the epic dismantling, disemboweling, and evisceration of liberal journalist Jonathan Allen.

While watching the takedown of Allen was fun, Tucker’s interview with a Hampshire College social justice warrior was extremely unsettling, and one of the scariest interviews I’ve seen:

Hampshire College in Massachusetts has removed all American flags from its campus after unnamed students took down Old Glory on the night before Veterans Day and set it on fire.

The school’s president said that going forward, “no American flags will be flown on campus. Getting rid of the flag will allow us to focus our efforts on addressing racist, misogynistic, Islamophobic, anti-immigrant, anti-Semitic and anti-LGBTQ rhetoric and behaviors,” Tucker Carlson reported.

Carlson discussed the incident with student Daniel Vogel, who supported the removal but did not participate in the burning.

The student wasn’t a screamer like so many of his peers. And he wasn’t stupid — he probably knows the name of the Vice President.

The conservative media take on the interview is to say that Tucker destroyed the student. I disagree. The student was impervious to being intellectually destroyed because that would require self-awareness and openness.

What was scary was the robotic recitation of ‘social justice’ and ‘anti-imperialist’ talking points, with a mesmerized look on his face. I’ve seen that look before, when I studied in the Soviet Union. It’s the look of someone from another world, someone who believes in their alternative truth.

Many of the students in my Moscow dorm were from the Soviet bloc countries in eastern europe. As a group, they were extremely friendly, not openly anti-American. (Many were secretly anti-Soviet, particularly the students from Hungary.)

I’ll never forget a student from Czechoslovakia. I don’t remember how it came up, but I mentioned that North Korea had invaded South Korea to start the Korean War. She stopped me and stated that I was wrong, the South had invaded the North. She had the same stare on her face as the SJW interviewed by Carlson. There was no convincing her otherwise. She had been raised in an alternative truth.

I think we’ve abandoned much of our education system to those who indoctrinate students in alternative truths. The results are students like this SJW, who are beyond reason. That’s far scarier to me than someone screaming — at least the person screaming exhibits human emotion, and has not turned into a robot. I worry more about the robots.

That robot, by the way, says he wants to become a teacher.

There is a big difference Professor. The students in Moscow had good reason to live in fear. The Soviet Union was not exactly tolerant of ideological deviation. I saw this interview live, and this young man struck me similarly. A disturbed true believe.

I watched it live too…it was scary. It didn’t matter what Tucker said, this kid kid just kept up his SJW monolog. I hope his parents were watching and realize how much money they wasted…and cut him off from last night forward.

I watched it live too…it was scary. It didn’t matter what Tucker said, this kid just kept up his SJW monolog. I hope his parents were watching and realize how much money they wasted…and cut him off from last night forward.

This poor little chestless puke WILL be a “history teacher”.

Is that a scary thought or what? He hates American and all it stands for, what do you think his students are going to get out of it? That just scares me.

And as a history teacher, he’ll control the present.

History teachers do nothing, if not control the past. Or at least, how the past is presented to future generations, which is just as powerful.

And THAT is what makes this joker so scary.

You have to visit Hampshire College to understand fully how out of the mainstream it is and therefore he is. After all he mentions taking a few steps further north in Amherst to Amherst College or UMass to find “diversity” of thought. Neither of those campuses is in the mainstream of ideological diversity. But to a Hampshire student they are.

Not only is it one of the few truly radical schools, it is one of even fewer that pride themselves on not giving letter grades. Per Hampshire, “grade-based evaluations fail for a number or reasons.” They love their “radical” nature.

So to see him act like an apparatchik is no surprise.

I think he’s from Gatlin, Nebraska,

so glad I permanently messed up both my knees and back (stupid accident training in germany) at the age of 19 just so I could see the day american flag was not allowed on a college campus.
I bet every flag except the american flag is allowed though.
fk it, these people are not worth another thought from me.

Is is just me or was Tuck trying most of this interview trying not to laugh at this idiot?

If that smug little beta male really believes that his education is being funded by wealth earned by slavery and the family home sits on property stolen from the Indians… he can put his convictions before his desires and GIVE THEM BACK. Convince mommy and daddy to give his tuition to poor black students. Convince them to sign the deed to their home over to the nearest Indian tribe. I’d be willing to bet that little weasel has never turned down a penny from his family. He feels entitled to an “education” that’s going to cost a quarter of a million dollars and leave him stupider than when he first arrived on campus.

He did bring that up to the kid, and the kid just ignored giving his spot to a needy diversity student.
Tucker also brought up that a years tuition is more than the average annual income in the U.S. Again, no clue from the child.

“…the wealth that my family earned was derived from slavery.” (Paraphrased)

Exactly how many slaves lived in Portland, ME? Or Portland, OR for that matter? Honest question.

Yea, I had an idiot try to lecture me about how my being white means that I owed something for slavery. Neither side of my family was even here for the Civil War, in fact not until 40 years after, so there is no way they were involved in slavery. I then gently suggested that perhaps his racist bigoted anti-white ass educate himself instead of letting fear and racism rule him. Priceless look on his face. I don’t think he expected to run into a white person who wouldn’t just duck their head and act ashamed of being white.

None, but you’re asking the wrong questions.

How many New England ship captains made money hauling slaves from Africa? A large number.

How many of them became abolitionists before the money made that way dropped off? Not many.

How many of their damyankee descendants felt entitled to lecture Southerners who had nothing to do with slavery about their “Bigotry”? Pretty much all of them.

According to family genealogy research, my forebearers were living in the south at that time. Somewhere in the Georgia area. They owned as SMALL farm. They were so rich they had a goat and a jackass. ( sarcasm alert ) No slaves.

Where the south fell, the Union army confiscated the farm and all livestock. Then gave it to a black family. The previous owners were force to walk to Texas, in the winter. No money, no firearms. Only allowed to take the clothes on their backs.

Of the five children, three starved to death on that walk.

I am lucky to be be in existence.

Just were is this “fortune” my forebearers made?

While I have never been there, I am sure there is a large diverse student population.

Where have you been, General?

He got his 15 minutes. That’s what he was after. That’s what all the SJWs want. They’re attention whores. All the way up to Obama. They want a piece of candy every time they make a stinky in the potty.

pull all Federal funds from the school, to include loans, grants, etc.

they don’t like America, let them live without its help.

No flag. No money… and tax their endowment.

“I reject your reality and replace it with my own!” (Myth Busters).

The student from Hampshire College wants to be a “history” teacher?

I would not want that guy anywhere near a kid of mine!
Just another American hating snowflake at a rich kids college.

Quick, professor, to even yourself out you have to watch one of those montages on YouTube of “gangsta” Ben Shapiro laying waste to these creeps.

I saw this live last night. I’d like to say that I was horrified, but in reality my perspective on millennials was reinforced. I particularly “liked” the exchange roughly between the 4 and 5 minute marks. I wonder if Tucker could arrange an interview with this guy’s parents.

And I agree–his show is of to a good start.

I’m not sure the child even knew what Tucker meant when he said in his child version of socialist utopia he’d be killed and eaten without the police or military. Totally ignorant.
The poor little child of privilege also wanted to have a copy of the tape for his indoctrination of his future pupils. I hope he’s clueless enough to believe he sounded good and does show it to future classes. He’d be the laughingstock of his school.

He takes the benefit of what he abhors, to be inside his comfortable, like minded bubble, far removed in spitir and proximity from the “oppressed” he cares so much about.

Had no answer to that one.

This guy will wind up facilitating terrorism.

Barring one helluva “come to Jesus” epiphany, this guy is a lost cause, a blind believer.
Arguing with these people is like triage: save who you can, read last rites to the dying.

And kill the plague carriers to slow down the spread.

Little sh*t needs to put his money where his mouth is and demand that his family return everything they have. I bet there is a hippie commune they could take up residence.

I’ve seen the look on that guy’s face somewhere else. Oh yeah, I remember: it was on the faces of Khmer Rouge troops.

A true believer for sure. Some days, like when viewing trash such as this, I’d like too see a real revolution.

Tucker is doing great at his new job. Only a few weeks on the job, and he’s beating out CNN/MSNBC & he draws more total viewers than Megyn Kelley.

Anyone else catch the student rolling his eyes early in the interview?

I don’t want to say anything that might be interpreted as a threat. And I don’t mean it as such. Besides, I’m too old to be making threats.

So I’ll just wish this guy a long and interesting life.

If this moron had a single moral bone in his body he would disconnect himself from his burden of Privilege and allow Blacks and the oppressed to utilize his grotesque wealth of privilege, but we all know that isn’t going to happen. Because he loves him some privilege!

Dip him in water and he’ll melt away like sugar.

So really, he has no world perspective just talking points. He is the definition of ‘white privilege’. And how old is this kid.

couldn’t even watch the whole thing, but I think I know how it comes out…