The former Ohio Senator was more interested in living than legacy. 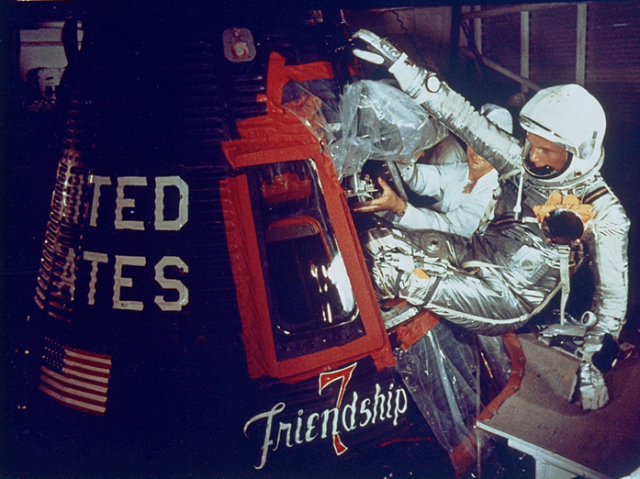 Famed American astronaut and former U.S. Senator John Glenn once remarked, ““I’m not interested in my legacy. I made up a word: ‘live-acy.’ I’m more interested in living.”

And lived he did, as shown by the biographies that appeared as the news of his death spread quickly through social media and featured reports today.

The former astronaut and U.S. senator was being hospitalized at the Wexner Medical Center at Ohio State University in Columbus when he died. In 2014, Glenn suffered a minor stroke, affecting his vision, after undergoing heart-valve replacement surgery.

…The last of NASA’s original seven astronauts to die, Glenn circled the world three times on board the Mercury capsule “Friendship 7” before splashing down in the Pacific Ocean on Feb. 20, 1962.

While he did lead a fascinating life for a bulk of those 95 years, it was his time in space (including his 1998 ride aboard the Space Shuttle Discovery) that inspired most people today reflecting upon the sad news.

I watched #johnglenn go to space for a second time. Truly inspiring that a 70-year-old was still in physical and mental shape for that. 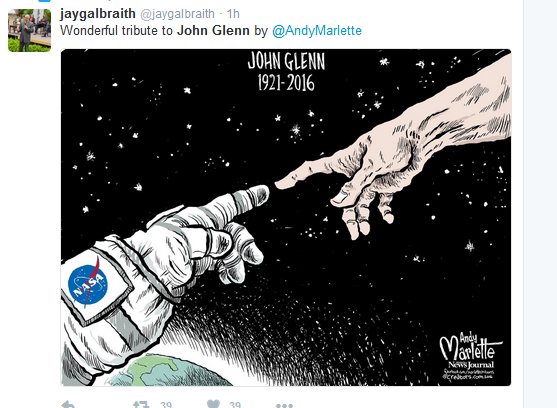 As the 1st American to orbit earth & the oldest man to enter space, John Glenn epitomized the American spirit that makes our country great.

John Glenn, the first American to orbit the Earth, has died.

We use the word “hero” a lot. He defined it.https://t.co/avDWK4A5Vt pic.twitter.com/3gW5jBF1Pm 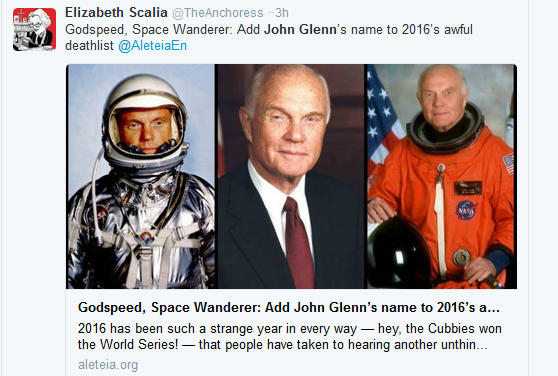 Yes, as the Anchoress Elizabeth Scalia notes, this year’s deathlist has been quite grim. As Professor Jacobson noted, the news of the passing of Greg Lake (who fronted both King Crimson and Emerson, Lake and Palmer) also broke today.

Given this year’s presidential election, and the importance of the Rust Belt in the dynamics of the campaigns, it is also interesting to look back on Glenn’s career as an Ohio Senator, which spanned from late 1974 to 1999. Here is a video of him debating Walter Mondale during the 1984 Democratic Party presidential primary:

And then there was this episode:

NASA has set up a special photo gallery to commemorate Glenn’s space career.

Glenn was awarded the Presidential Medal of Freedom in 2012. He is survived by his wife, Annie; two children, David and Carolyn Ann; and two grandchildren.

I will conclude with one last Glenn quote: ““If there is one thing I’ve learned in my years on this planet, it’s that the happiest and most fulfilled people I’ve known are those who devoted themselves to something bigger and more profound than merely their own self-interest.”

It’s a tremendous loss. But what a life he had.

A hero if ever there was one. I remember sitting in my 5th(?) grade class listing to the launch.
Truly, we stand upon the shoulders of giants.

The Mercury capsules looked like they were made in someone’s garage. Those seven astronauts were brave as heck.

Then, of course, it was leading edge. Now, like taking a Model T into space.

The Glenn quote that concludes the article ought to be widely circulated, especially in the halls of academia.

RIP Mr. Glenn. You were and remain an American treasure.

A true American hero. The only Democrat I have ever voted for. May he find comfort in the arms of Angels…

I beleive in saying good things about folks when they pass. This is especially true for folks who have accomplished great things.

Yet it is noteworthy to mention the Keating five connection. this is the first article that I have read/heard that mentioned that.

Sad to then have to note, how the one GOP senator, McCain will be mentioned in his obituary will not be treated the same.

“Glenn’s only brush with negative publicity came in 1989, when he was one of five US senators embroiled in the Lincoln Savings and Keating Five Scandal” . . . . .is not true.

My dad bought the 45 rpm of Walter Brennan reciting The Epic Ride of John H. Glenn

I recall the excitement we all felt as we watched and listened to his flight.

I met him and his wife Annie a Ohio State while waiting for an elevator. It was 8 o’clock at night and only the 3 of us for a full minute. As an avid space geek and history buff since at least 8 years old, that was an experience I’ll never forget. They certainly don’t make ’em like they used to.

John Glenn was my childhood hero.
May he rest in peace.