From the beginning and to the end, a master of the love song. 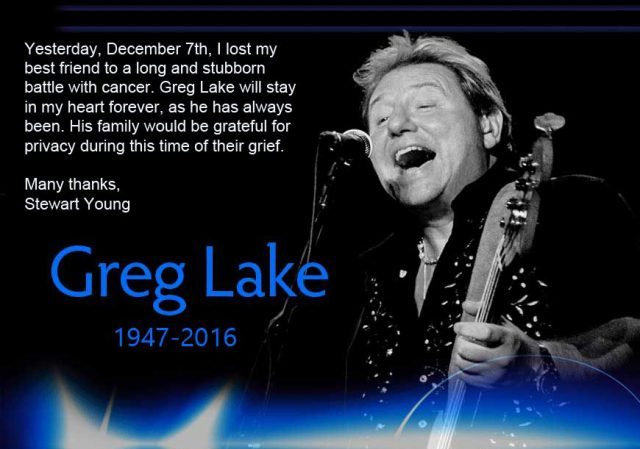 As the rock generation of the 60s and 70s ages, we’re seeing increasing number of deaths at relatively “young” ages based on current average life expectencies.

We can’t write about them all, but this one is special, at least to me.

Greg Lake, who fronted both King Crimson and Emerson, Lake and Palmer, has died aged 69.

One of the founding fathers of progressive rock, the British musician is known for songs including In the Court of the Crimson King and his solo hit I Believe in Father Christmas.

He died on Wednesday after “a long and stubborn battle with cancer”, said his manager.

Keyboardist Emerson died of a self-inflicted gunshot wound, coroners in the US said….

Born in Bournemouth, Lake was given his first guitar at the age of 12 and took lessons from a local tutor called Don Strike.

He formed a close friendship with fellow student Robert Fripp, with whom he created King Crimson in 1969….

But within a year, founding member Mike Giles quit and Lake refused to work with the band….

The singer and bassist was then approached by Emerson, who had supported King Crimson on a North American tour and needed a singer for his new band.

Joined by Atomic Rooster drummer Carl Palmer, ELP made their live debut at the Guildhall in Plymouth in 1970 before giving a career-making performance at the Isle of Wight Festival.

Unusually, the band combined heavy rock riffs with a classical influence. They scored hit albums with Pictures at an Exhibition, Trilogy and Brain Salad Surgery – many of them produced by Lake himself.

Tarkus, released in 1971, featured an opening track inspired by the fictional Tarkus character – a half-tank, half-armadillo creature that would appear on stage at gigs – that lasted more than 20 minutes.

The band went on to enjoy chart success in 1977 with their version of Aaron Copland’s Fanfare for the Common Man.

ELP’s ambitious light shows and on-stage theatrics were the epitome of ’70s rock excess, and several punk acts cited ELP as one of the bands they were reacting against.

But the band sold more than 48 million records, and Lake continued to be an influential and popular touring musician even after the band wound down in the late 1970s.

Emerson Lake and Palmer, and particularly solos by Lake, have been featured in our Video of the Day series in the sidebar multiple times, most recently in October 2015.

This version of “Still You Turn Me On” I dedicate to my wife each time we run it. Not only is it a great song and rendition, I love the way he is chewing gum while he sings:

I guess you could say I’m a “Lucky Man”:

These simple solos were more to my liking than some of the ELP electric music and shows. From the beginning and to the end, Greg Lake was a master of the love song.

I ate pizza with Greg Lake, at a bar/restaurant in Big Rapids MI after Lake and EL&P had played a concert at Ferris State College (now university) in 19…73? 74? After the concert, a couple buddies and I hit the restaurant for some grub and in walks the roadies, and then half the band, including Greg Lake. Being crowded, we got asked to share our bench table. Well, hell yes. Can’t speak for the band, but we were SO stoned.

I was a big fan of both King Crimson and Emerson Lake & Palmer.

You and me, pard. Also the Mahavishnu Orchestra.

My late brother turned me onto Emerson, Lake, and Palmer when I was a know nothing kid in elementary school.

From Pictures at an Exhibition to Fanfare for the Common Man, to their own brilliant work, they taught me what made really good music sounded like.

A great voice! I’m glad somebody ‘turned me on’ to his music. May he rest in peace now.

I had the privilege of meeting Keith Emerson in 2013 – a great guy, who also sadly passed away too early in his life.

What a brilliant guy Emerson was, as was Greg Lake. ELP drummer Carl Palmer is no slouch himself.

And, an incredible jazz improv by ELP:
https://www.youtube.com/watch?v=1-G_uERgMgI

And there’s this incredible medley:
https://www.youtube.com/watch?v=l6EGhQvQHQU

Fanfare For the Common Man
https://www.youtube.com/watch?v=0OLWgrr671g&list=RD0OLWgrr671g&index=1

In particular from this album:
The Great Gates Of Kiev
https://www.youtube.com/watch?v=4ovyF9g3GjA&list=RD0OLWgrr671g&index=20
“Death is life …”

Used to turn their music on, pull out my horn, and have a grand time. Now, time passes. And, so too, those who have brought us so much more than entertainment.

Lucky Man was one of the very first songs I learned how to strum on guitar. ELP has been a powerful musical influence in my life, and now two of the three are gone.

It’s been a lousy year in that respect.

I have all of ELP‘s major studio albums. My favs are the first album, Emerson, Lake and Palmer, Brain Salad Surgery, Tarkus, Trilogy and Pictures at an Exhibition. But, my very fav has to be Brain Salad Surgery and the only way to listen to that is stoned to get any real meaning out of it. Their rendition of Toccata just blows my mind apart, especially in headphones and Karn Evil 9 (the full half hour version) is a must listen with headphones on. Especially the last 20 secs.

I still listen to ELP albums. Greg Lake was an off-beat visionary, but I loved his stuff. He dabbled in classical, rock, metal, and sometimes all three at once!

I was fortunate to see ELP in Providence, RI in the mid 70’s. I’ve been a fan for life and will continue listening to Emerson (RIP), Lake (RIP) and Palmer until I, too, pass on.