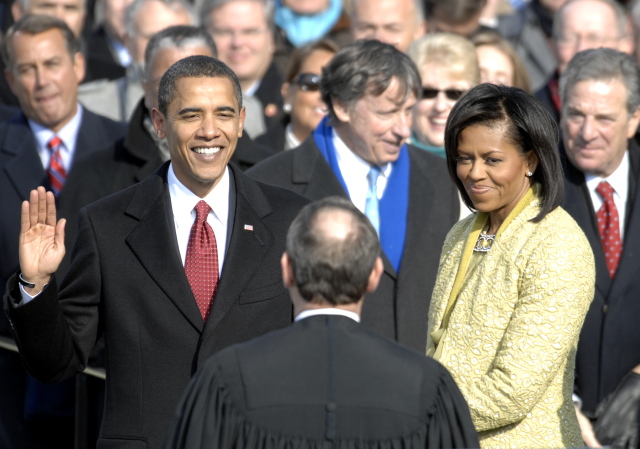 What a difference eight years makes. With few exceptions, our national media is confused and depressed about the prospect of President Donald Trump.

Back in 2008 however, the media was downright giddy over the election of Obama. Some journalists even wanted George W. Bush to step aside early so Obama could be sworn in before January 20th.

The Media Research Center recorded all of this for posterity:

“We can’t afford to waste an hour, much less a day or a week or a month. And this business of being a lame duck President and saying, you know, ‘Adios. I’m going to the ranch. I’m just not going to do very much during this period.’ We can’t afford it….We’re in possibly, possibly the biggest crisis we’ve been in since December 7, 1941, and maybe since the time of the Civil War. So, we can’t afford to have this interregnum.”
— Ex-CBS Evening News anchor Dan Rather on MSNBC’s Morning Joe, December 5.

“If I had my druthers right now, we would convene a special session of Congress, amend the Constitution and move up the inauguration from Jan. 20 to Thanksgiving Day….Just get me a Supreme Court justice and a Bible, and let’s swear in Barack Obama right now — by choice — with the same haste we did — by necessity — with L.B.J. in the back of Air Force One. “
— New York Times columnist Tom Friedman, Nov. 23.

“Thanksgiving is next week, and President Bush could make it a really special holiday by resigning. Seriously….Just to be on the safe side, the Vice President ought to turn in his resignation first. (We’re desperate, but not crazy.) Then House Speaker Nancy Pelosi would become President until Jan. 20. Obviously, she’d defer to her party’s incoming chief executive, and Barack Obama could begin governing.”
— New York Times columnist Gail Collins in her November 22 column, “Time for Him to Go.”

Had you forgotten how over-the-top the liberal media’s cheer leading was for Obama?

Host Gwen Ifill: “Maybe what people are beginning to say is that this President-elect should be President now? …”
New York Times reporter Peter Baker: “That’s right, exactly. People voted for change and [there’s] this strange, odd 77-day waiting period that we impose, in effect, between our election and our inauguration.”
— PBS’s Washington Week, December 5.

“No lame-duck President can do anything meaningful after the successor is elected. The time is spent figuring out things like how many presidential pardons to issue, many to convicted political pals….We should move the President’s inauguration up to the first Tuesday in December, one month after the election….People who elect a new president are eager for the change to take place. The sooner the better.”
— USA Today founder Al Neuharth, November 14 column.

Flash forward to today and things are quite different.

White House warns Trump, ‘only one president at a time’

The White House rebuffed President-elect Trump’s criticism of the administration’s decision to not veto a U.N. resolution critical of Israel’s settlements.

In a briefing on the move Friday, Ben Rhodes, deputy national security adviser, said, “On the president-elect, the first thing I’d just say is that there’s one president at a time. President Obama is the president of the United States until Jan. 20, and we are taking this action, of course, as U.S. policy.”

Isn’t it a good thing that Trump, too, has a pen and a phone?

If one regime can change long-standing US policy without consultation with anyone, literally on their way out of office, then a subsequent President can reinstate that US policy just as easily.

It sure is, Granny! And, President-Elect Donald Trump has already demonstrated that he’s more adept at using them for the good will and general benefit of America.

Agreed, let’s get the Oath of Office done right meow before further damage is done!

Side note, John Boner sure looks happy in that picture….what a turd.

Obama – Wins Nobel Peace Prize for ?
Trump – Called a fascist and tyrant, yet has never held an office of public trust that he could have betrayed.

I guess some people are capable of perceiving things that are beyond us mere mortals.

Even though it is the truth, talking about the hypocrisy of the left is getting tiresome. We all know they have no embarrassment at being two-faced or hypocritical and some even are proud of it. They have no shame about anything they do that turns out wrong or worse, evil and they NEVER apologize. I guess it gives fodder to the website writers but other than that it’s like talking about the sky being blue.

So, I’m watching Oliver Stone’s American History series while waiting for the bagels to rise. Lo and behold, this garbage from the Democrats is nothing at all new. They pulled the same sort of shenanigans at the convention that put Truman in as VP.

Have to keep hammering on it no matter how obvious it seems, as otherwise some traitorous putz in the Conservative camp will pop up and insist that “we can work with these people!”

No, we can’t. And it’s vital to remember that we can’t, and remember why we can’t.

No lame-duck President can do anything meaningful after the successor is elected.

An interesting little bit of obliviousness from USA Today.

Even the lamest of ducks can do any number of things to annoy his successor.

An old favorite, part of an outgoing President’s arsenal since John Adams, is lifetime appointments of judges. But he needs the collusion of Congress for that, so Obama is stymied.

Another is pardoning criminals. That Obama can do all by himself.

And the biggest is to involve the country in a war. Haha, that would show Trump who’s boss! Again, a President can’t do that one on his own. But he can provoke another country into doing it for him. Unfortunately for Bammie, Putin’s not so easily manipulated, at least so far. But we all know who’s still the CinC, and he still has twenty days to come up with an outrage.