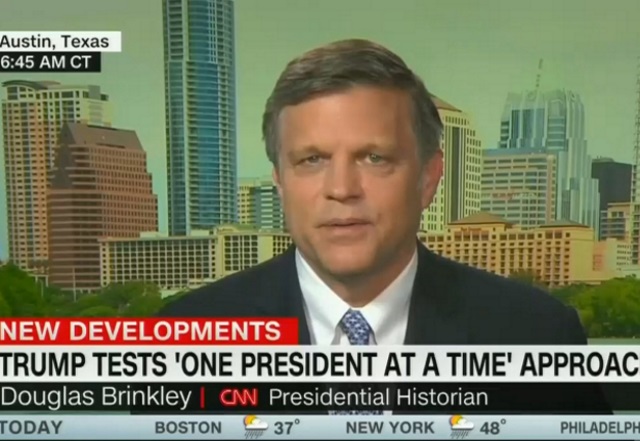 CNN’s presidential historian Douglas Brinkley this morning accused Donald Trump of “big-mouthing” President Obama by speaking out on policy issues during the transition. Co-host Poppy Harlow had teed Brinkely up to slam Trump, worrying that Trump had flouted the “one president at a time” tradition, and fretting that by doing so Trump was “confusing our allies and our adversaries.

Brinkley was only too happy to run with the ball, responding: “I think it’s very wrong-minded of Donald Trump to be doing this . . . what you don’t want to do is to be big-mouthing and big-footing a sitting president . . . . I find it troubling, but I’m not going to be able to stop him from doing it.”

Note: “Big-mouthing?” Is that even a word in the sense Brinkley used it? Looks like the liberal establishment’s contempt for Trump is driving them to new neologistic heights!

POPPY HARLOW: You know, one thing that we’re certainly seeing now is questions about where this one-president-at-a-time practice has gone. You know, all the way back in 2001, George W. Bush, then President-elect, said this: we have one president and we’ll have one president and the current president is President Clinton and our nation must speak with one voice.” Then you had President Obama abiding by that, as well, in 2008. Before he took over when asked about things like the Gaza war, said basically I defer to the sitting president. That has been turned on its head with President-elect Trump, from the call with the Taiwanese president to what he tweeted about Israel and the United Nations decision at the end of last week and Netanyahu. Not to mention the China drone. What does this mean for sort of this practice moving forward and does it confuse our allies and our adversaries?

DOUGLAS BRINKLEY: I think it’s very confusing and I think it’s very wrong-minded of Donald Trump to be doing this. Look, there are different strategies of transition, but what you don’t want to do is to be big-mouthing, big-footing a sitting president. Basically saying ignore anything America does or says for the next month because I’m coming in, new management in town and just don’t listen to President Obama. I don’t think Donald Trump four years from now if he didn’t get re-elected or even eight years would appreciate somebody coming in and acting that way. But we’ve seen this is Donald Trump’s style. He does things differently. I find it troubling, but I’m not going to be able to stop him from doing it.

“Looks like the liberal establishment’s contempt for Trump is driving them to new neologistic heights!”

Rags, I’m sure you’re familiar with “neologisms”—newly coined words or expressions. I intentionally used “neologistic” here to suggest that the libs are being driven to create new words to express their contempt for Trump.

Rags I want to apologize for people not being able to take a joke, I got it, but oh well.

LMAO, “Is your Mommy or Daddy where I can talk to them?”

Because resident elect Obama most certainly didn’t step on any of Bush’s policies before he took officer it.

Or trash Supreme Court justices attending his State of the Union speech?

We can’t get this malignant flea out of the White House soon enough. Fortunately, Trump has his NY ‘White House,’ which will give exterminators the extra time to thoroughly fumigate 1600 Pennsylvania Avenue after 8 years of the Obamas.

In this election, it is obvious that the new President will be embarking in a new policy direction, which has been ratified by the electorate. So, President Obama should not be taking ANY actions which would further any policy counter to those espoused by the President-elect. However, this is not the case this year. Obama IS taking such actions and this leaves Trump free to criticize those actions. Any confusion is being generated by Obama, not Trump.

One president rule? Oh please. Just wait ’til Øbama leaves office. He’ll be more visible and more vocal spewing out his progressive bull crap than he was in office. Clinton (sleaze that he is) set a new paradigm, leveraging his eight years in the White House into a small fortune.

‘W’ (like him or hate him) has been pretty cool about staying out of the public eye, *especially* with respect to policy issues. To me, that should be the standard for an ex-president. Carter has been a better ex-president than president (not hard to do), except for the occasional expression of his warped views of the Middle East. Generally Carter has tried to do good things for humanity, not line his pockets.

If only—I repeat—if only Øbama would fade away. I quite dislike him personally (NO redeeming qualities), and I’m sick of his empty rhetoric and misguided views of the world. But the press still loves him and will keep reporting his pontificating, self-aggrandizing, condescending B.S.

Maybe, just maybe, they’ll be a scandal; Øbama and Reggie and/or Valerie, Michelle divorcing him, anything.

The only hope (and I think it’s valid) is that Trump is like that honey badger that went viral a few years ago. He don’t care … and I don’t think he’ll just sit by and let Øbama dis him as he carries out the will of the people. The best way to silence Øbama will be for Trump to perform, turn things around (can you spell the economy?), and start making America great again.

Just the talking point du jour. Worthless filler by desperate leftists in a futile attempt to make themselves feel good.

You’ll never hear talk of it again after 1-20-17, when it’s time for their guy to ‘bigmouth’ Trump, ad nauseum.

The Useless One isn’t being “big-mouthed” or “big-footed.” Trump is schlonging Obama.

A shame the boat that Brinkley and Penn commandeered post-Katrina didn’t have a much bigger leak.

No biggie, Mr. “Historian”; in less than 4 weeks, this particular mini-whine by you and CNN will be consigned to history’s dustbin.

This is a common lefty media scam. If Trump speaks out on policy issues prior to inauguration, he’s meddling, interfering… ‘big-mouthing’. But if Trump decides to stay mum on policy till inaugurated, they’ll castigate him for a ‘lack of transparency’ and refusing to talk to the people or media.

Actually, I’m pretty sure they’ve made *both* accusations within the last week.

Consistency is the hobgoblin, and all that.

Will they expect Obummer to butt out when he leaves office? That used to be a tradition as well.

Don’t bet on it – they’ll be running to him twice a day.

Ah. That would explain all the new shaved heads — liberals terrified they’ll go mad and set their own hair on fire.

Eight years ago Democrats were saying that Bush should resign so that Obama could be sworn in early. They also had the silly notion that FLOTUS should be paid.

Mike did give up a promising career in the NFL.

In case anyone didn’t get the “Mike” reference:

This is not an historian. This is the person that wrote John F. Kerry’s hagiography, which was debunked by the Swift Boat Veterans.

Thank you for noting that.

This guys writings need to be in the Fiction section

Two things I’ve noticed about many presidential historians is how little they know about:

But they are paid well. By ex-presidents.

Interesting to note that all these “presidential historians” wind up being on the democrat payroll.

And it’s a sorry state that none of us expect any of Doug Brinkley’s fellow historians take offense to this abuse of his “historian” credentials.

My latest bait to drive the libs crazy (not hard really) is to ask when the Nobel committee is awarding President Trump his Nobel Peace Prize for getting elected.
They haven’t take it well, but I’ve enjoyed their hate.

I am stealing that stunt.

Anybody remember
1) ”Office of the President-Elect”, complete with seal and podium for his daily briefing?

2) Asking the Bushes to move out of the WH before inauguration so the obama’s kids could start school?

The problem with Brinkley’s argument is that we have a current president who is: lazy; ignorant of history; indifferent about Christian martyrdom by Islamists; anti-Semitic to the core; arrogant about his imagined greatness, self-centered; ad nauseum.

Except the mind of this lame duck president is out to lunch on the 18th tee.

From his first day in office obama’s policy has been to trash our country. His next two targets were tied as hate targets, Britain and Israel. Trump has a duty to humanity to curb this vile man anyway he can as soon as he can.