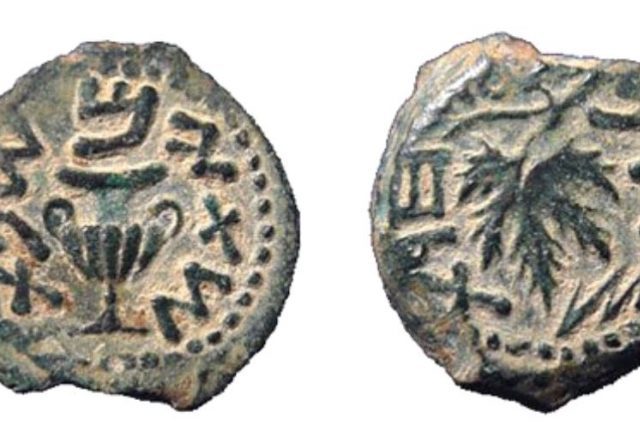 As UNESCO, Palestinians, and Jew-haters everywhere seek strip Jews of their heritage in the land of Israel and Jerusalem, archeological facts keep getting in the way.

The Jerusalem Post reports on another archeological find that has a certain numerical significance, ‘Free Zion’ coin minted 1,967 years ago unveiled:

Long before the “Free Palestine’ slogan became popular – in fact about 1,967 years before – a “‘Freedom of Zion” coin was minted and circulated in Jerusalem.

Culture and Sport Minister Miri Regev unveiled that coin at Sunday’s cabinet as part of a presentation she gave about preparations for next year’s celebration of 50 years since the reunification of Jerusalem. The coin was uncovered during an excavation about a month ago of a recently uncovered road in Jerusalem. The excavation site will be opened to the public during Hanukka.

The ancient coin was one of a series minted during the Jewish revolt against the Romans that eventually led to the destruction of the Second Temple in 70. The flip-side of the coin bears the inscription, “Two years to the Great Revolt,” which dates it to the year 67.

“Exactly 1,900 years later, in 1967, the paratroopers entered Jerusalem’s Old City and renewed its freedom, and ours,” Regev said. “We restored Jewish sovereignty to Jerusalem. We threw into the dustbin of history the coin issued by Titus after his victory over the rebels: Judea Capta [Judea Captive].”

Regev was referring to a series of commemorative coins issued by the Roman Emperor Vespasian commemorating the Roman defeat of Judea and destruction of Jerusalem.

Regev, noting the recent “ridiculous” UNESCO resolutions that sought to expunge any Jewish connection to the Temple Mount, said, “In 1967 we returned to Bet El, Hebron, Shiloh and Elon Moreh.”

A commenter at Algemeiner gives this explanation:

The coin is in the original Hebrew script.

The image on the right, on the right side of the coin, says ‘Tsiyon’ ציון . The zigzag letter is the letter צ . (It looks like a W flying like a flag on a pole, I . Here the pole is short.) Read counterclockwise.

Tsiyon is Har Tsiyon, the mountain that the Holy Temple is on, on its summit, with Yrushalayim, the City of David on its southern slope.

Zionism derives from the preservation of both the Jewish capital city and the Jewish Temple.

There wasn’t even an Islam yet, and the Arab Muslim invaders wouldn’t show up for several centuries. Tell me again who the indigenous people are.