“Why I was arrested and thrown in jail by George Mason U. police”

“Why I was arrested and thrown in jail by George Mason U. police”

Oleg Atbashian of The People’s Cube speaks out. 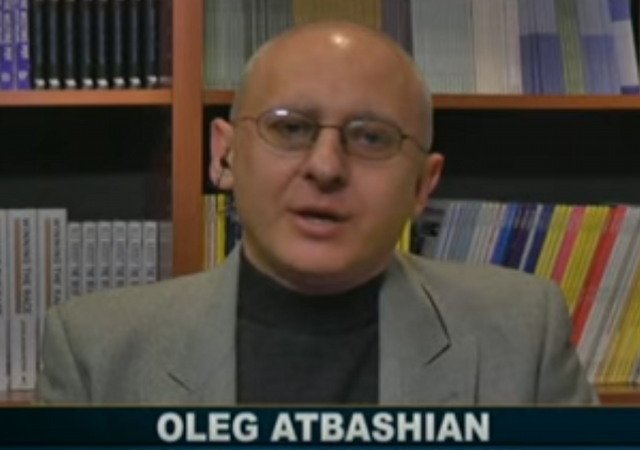 Atbashian was born in the former Soviet Union and knows the evils of censorship and unchecked government power all too well. As we mentioned in a recent post, he was arrested earlier this month for placing anti-terrorism posters on the campus of George Mason University.

Why I was arrested & thrown in jail by @GeorgeMasonU police

As you may have heard, on November 4th I was arrested, handcuffed, and taken to jail for posting anti-terror stickers on George Mason University campus. I was charged with “class 6 felony for destruction of property,” threatened with five years in prison, and released 14 hours later on $8,000 bail posted by my wife. The court date is now set for February 14th, 2017.

You can read the full description of how it happened in a number of news stories below. Now I’d like to explain why I did it.

George Mason University (GMU) ranks number three in the top 10 most anti-Semitic campuses, with very active, rabidly anti-Israel student groups, who thrive in the school’s politically correct climate. The administrators’ endorsement of pro-terror activism may be explained not only by their “progressive” ideology, but also by large donations from Islamist groups tied to terror finance – two factors that have been increasingly converting American universities into Marxist madrassas. For more background, see a well-researched article about this case by Kyle Shideler.

On the weekend of November 4th, GMU was hosting a two-day national conference held by the Hamas-affiliated hate group, Students for Justice for Palestine (SJP). In this regard, prominent author David Horowitz had addressed the GMU president with an open letter, recommending to conduct an immediate inquiry into the group’s activities and remove their campus privileges and funding, in order to stop harassment and intimidation of Jewish students at George Mason. That letter remained unanswered.

While I’m not Jewish myself, it is self-evident that Jews have been the “canaries in a coal mine,” always targeted first before the rest of us are killed and maimed by totalitarian forces, be it Nazism in the 20th century or Islamofascism in the 21st. Israel is as much a part of Western civilization as Europe and America are. When Jews are targeted, the rest of us eventually fall into the crosshairs as well, as has been proven by multiple terrorist attacks in Europe and America in recent years. Stopping Islamic terrorism, therefore, is not just a matter of someone’s decency or solidarity with the Jews. We’re past the point when that was anyone’s moral choice; it’s now a matter of everyone’s self-preservation.

It’s as simple as that.

Here’s an image of the posters, courtesy of The People’s Cube: 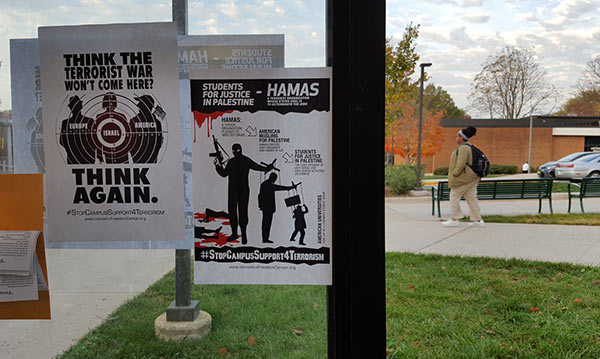 You can read all of Professor Jacobson’s coverage of the BDS movement here.

Another constant problem on campuses is the denial of free speech.

I’m just thinking out loud here but maybe we should listen to the guy who escaped the USSR.

Was the other side of this story even reached for comment?

Read the comment section for even more interesting background info.

That comment section is an interesting and thoroughly entertaining place.

Of course, if he had been tearing down pro-life posters or advertisements for a Milo speech, he would have been left alone to perform that vital work.

For those who don’t read it, Oleg is often a satirical delite and he is definitely one of the “good guys” when it comes to free speech.

This is an absolute shame and I personally plan to mosey over to his site and see what I can do to support him.

It is outrageous to be home to those who survived under Soviet regime but then try to silence those whose first hand experiences offer so much insight.

Oleg Atbashian is known for his political satire. He shouldn’t be: he is a scholar, and should be regularly lecturing at American universities.

Tragically, American universities have literally become bastions of perversity, but morally and politically. That we tolerate this is yet another perversity we deserve for our fecklessness in the face of it.

A collection of Oleg’s writings at American Thinker:
http://www.americanthinker.com/author/oleg_atbashian/

Most cops would have released him when they found out they would have to write a report with his name in it.

Actually I took this from an old newspaper clipping. Used to be a lot of local papers had a little “100 years ago” column that they ran daily. It was a clip from their paper on the same day 100 years before.

This was sorta.. taken from the old Tacoma, Washington (the real Washington) paper. Near Tacoma there is a small town named “Puyallup”. In the story a horse (100 years ago) died on the road to Puyallup, which was, and still is named “Puyallup Ave.”. Seems to cop had no idea how to spell Puyallup so he gathered a bunch of by-standers to drag the horses corpse around the corner so it was on a different street and he did not have to figure out how to spell “Puyallup”.

Look at all that criminal damage!!! FFS!

I was ready to be outraged until I saw where the signs were posted. He defaced building signs on the campus and got what he deserved.