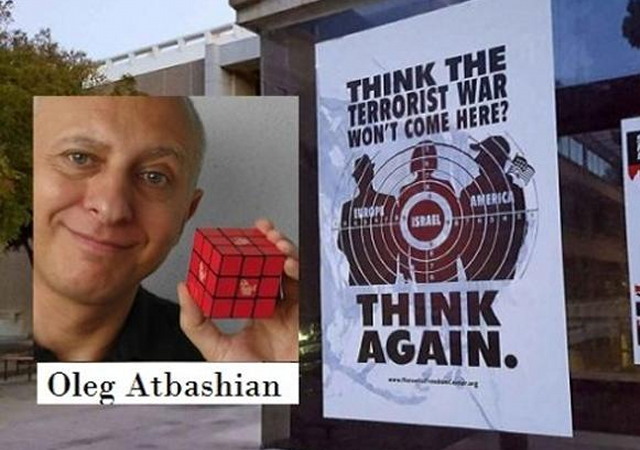 The artist is Oleg Atbashian, creator of the satirical website The People’s Cube. Do you think he’d be in trouble if he was hanging up posters that promote socialism?

The artistic genius behind the highly acclaimed conservative satirical site The People’s Cube has been arrested and released on $8,000 bail for putting up pro-Israel posters to combat a pro-Islamist conference at George Mason University. He now faces the prospect of five years in prison for allegedly committing a “class 6 felony.”

Beloved satirist Oleg Atbashian (who has contributed to PJ Media) has gotten in trouble for defying authorities before: “Back in my Soviet dissident days, when I was collecting signatures in defense of Andrei Sakharov, I was screamed at, threatened, and lectured by the KGB and Communist functionaries,” Oleg says. “What I never imagined was that in the United States, the land of the free, I would not only be subjected to similar treatment, but go to jail.”

As Daniel Greenfield of FrontPageMagazine noted, Atbashian has been a thorn in the side of the American left for over a decade, exposing political correctness through his hysterical cartoons and political commentary.

Sounds like a great lawsuit coming– putting up posters as a protest is a felony punishable by up to 5 yrs because???

The alleged felony is destruction of property, by putting up posters with “superglue” that can’t be removed. Atbashian denies having done so, but that is an issue of fact that must be determined by a jury; the arresting officer’s allegation is enough for the magistrate at arraignment. If the case ever proceeds to trial, which it won’t, the prosecution would have to prove it beyond reasonable doubt, which it can’t.

Sadly the University is named after George Mason, principal author of the Virginia Declaration of Rights, forerunner to our Bill of Rights.

Additionally, four members of the Volokh Conspiracy are professors there.