Will Hollywood ever learn? 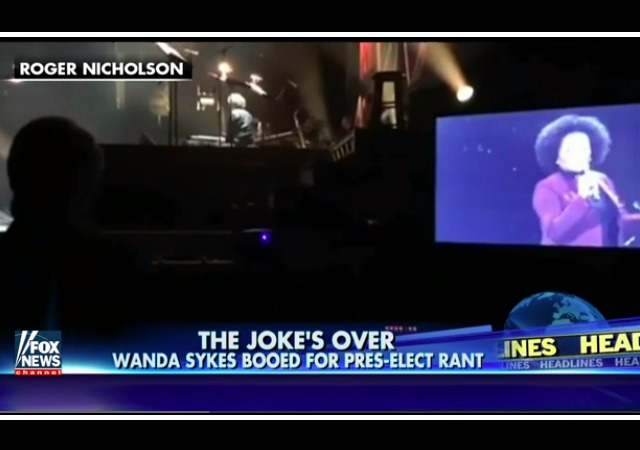 Wanda Sykes performed at 22nd annual Comics Come Home fundraiser in Boston, MA, when she decided to go off on President-elect Donald Trump:

“I am certain this is not the first time we’ve elected a racist, sexist, homophobic president,” said Sykes during her set, a video of which is below. “He ain’t the first one. He’s just the first confirmed one.”

Within a matter of seconds, the crowd and Sykes turned on each other. “F— you, motherf—ers,” Sykes said as the crowd’s boos intensified. “F— all y’all. F— all y’all.”

The audience responded with jeers and boos, which led Sykes to flip them off.

She continued to bash Trump even after everyone jeered her:

“I have a seven-year-old boy, those are the things I’m teaching him. Donald Trump is 70. That motherf—- isn’t learning s—. That’s just who he is. He’s the crazy man.”

Denis Leary took the stage to introduce the next performer and told the audience that Sykes “deserved the audience’s respect.”

Comic Nick DiPaolo performed next, but his routine also received a lot of jeers and boos since he inserted jokes with anti-Semitic references and raping women.

“For 22 years, we have never censored any performer at Comics Come Home,” Leary said in the statement. “ . . . This has resulted in the longest running stand up charity event in America. Even this past weekend, 6 of the 8 comics received big laughs and rapturous applause.

He added, “As I say each time we do this concert, the Boston audiences are the best in the country and their support of The Cam Neely Foundation for Cancer Care has been absolutely exceptional. We look forward to Comics Come Home 23 next November.”

Cam Neely, who played for the Boston Bruins, runs the Cam Neely Foundation for Cancer Care and said the event “has raised more than $10 million in cancer research, treatments, and services.”

In October, Amy Schumer received the same treatment after she kept insulting Donald Trump and those who support him. She even brought up a Trump supporter and put him in the spotlight, forcing him to tell all these people why he chose the GOP candidate.

People booed and stormed out of the show.

Countless celebrities spoke out against Trump and backed Democrat candidate Hillary Clinton. Many of them swore they’d move to Canada if Trump won, but now they all claim it was a joke.

Hold on, she called him an orangutang? Ah, that’s right, racism and primate jokes only work one way…

“Will Hollywood ever learn?”

I very much doubt it. Hollywood was co-opted by the Soviets back in the late 30s and early 40s, and it has never come out of that.

It is the place were Collectivist myths are created and propagated, and where they have their fullest-throated, most devout adherents.

There’s a great irony at work there, too, as you have people like Joss Whedon who view their own work as meaning the opposite of what it actually conveys. Truly a world of distorted mirrors.

About a lot of things. He was also a bit insane.

But there was a lot of well-founded public support behind the opposition to Communist subversive activities during the time, as Soviet archives prove.

can insanity have mass ? 🙂

To dmacleo: On Sundays, in the original liturgy…

“can insanity have mass?”

It certainly has spin and strange. Sometimes charm, but not today.

What did McCarthy have to do with Hollywood? Are you trolling us? Because that’s MY job!

The best revenge against these idiots who insist on insulting the audience is to STOP attending/buying there appearances.

once they lose cash, no one will pay attention to them.

there are enough others to fill the entertainment niche.

When Rush said he hoped President Obama’s presidency fails, she responded with “I hope his (Rush’s) kidneys fail.” This woman is over the top and has been for a long time. How is she still working?

She’s a queer, black feminist Collectivist who pretty openly hates anyone white and/or to the right of Van Jones.

From the text quoted here, I have to wonder where Wanda thought she was making a joke.

I miss Red Skelton. And, how about that guy Abbott N. Costello?

Don’t see her getting re-booked next year to what seems like a terrific cause. Good for Mr. Leary for his support of good deeds and the 1st Amendment.

Otherwise, I disagree with the “when will they ever learn” line.

Keep it up, Wanda. Hollywood’s overbearing temper tantrums and social scolding helped win the election. Keep it up.

I like radical progressives right out in the obnoxious open where I can keep my eye on them as they self-implode.

Do people actually pay money to see this woman perform?

Sykes seems to be mentally disabled.

As a free market guy, I’ll let the market will out. It will come down to money, as liberal ESPN and NFL are learning the hard way as we speak.

So, while I wish it were otherwise, market forces are not enough. If I were Trump, I would start by charging the MSM with violating campaign finance law.

Cable TV news in general is dying, partially via content suicide, but mostly a victim of technical advances, namely streaming internet. It dies close on the heels of print media, which is all but buried, also a victim of new tech.

That things tend to change slowly in the free market is a good thing, providing stability. It is economic Darwinism, natural media selection, if you will. If it’s operating in a truly free market, it will live or die on its own merits. Cable TV news is dying due to handheld tech, but it has also lost on merits through openly acknowledged bias.

I’ve never heard of her and have a slow hotel connection, so playing the videos is out. Was she ever actually funny? Or, is she one of these comedians who goes on stage and simply uses gutter language to get laughs?

She began as a B-list stand up comic in the 80s, got a few parts in failed sitcoms, became one of those ‘celebrities’ you only saw on game show panels. Her schtick has been observational humor with racial focus, but no real racism, other than making fun of how white guys dance, that sort of tired material. For the past 10-15 years she’s been a D or D lister. I had never thought badly of her other than considering her a not-so-good comic.

Donald Trump is an “orangutan”. She compares the president elect to a monkey, more precisely, a primate.

Dare one ask how people would react if…? Oh everyone knows the rest.

Rag; “Hollywood was co-opted by the Soviets back in the late 30s and early 40s, and it has never come out of that.”

Ooops. We actually agree. Broken clock and all that.

And to followup with the OP who asks if Hollywood will ever learn it’s lesson: No, they already know and do this deliberately.

People are sick and tired of their entertainment being hijacked to proselytize them on some political cause. Just ask the NFL.