People Storm Out of Amy Schumer Show After She Insults Trump

People Storm Out of Amy Schumer Show After She Insults Trump 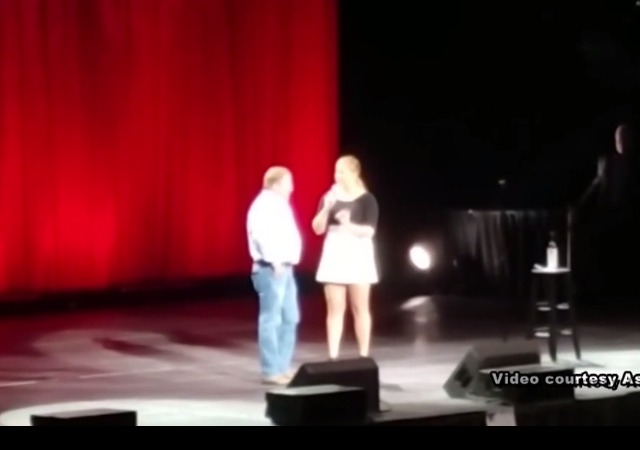 Do you ever think Hollywood will ever learn that not everyone thinks the way they do? Yeah, neither do I. Well, in Tampa Bay, people booed and stormed out of Amy Schumer’s comedy show when she insulted Donald Trump, calling him an “orange, sexual-assaulting, fake-college-starting monster,” and called for more gun control.

The group of people was relatively small, but large enough for others to notice:

Schumer scanned the crowd for Trump voters, and invited one up to the stage. He identified himself as Dave, an attorney and RINO (Republican In Name Only) who hadn’t voted for a GOP candidate since Reagan. He said he just felt safer with the country in Trump’s hands than Clinton’s.

“Do you get worried at all with how impulsive he is,” Schumer asked, frustration in her voice, “that he gets so fired up from Saturday Night Live doing a skit on him … do you worry he’ll be impulsive and get us in a lot of f—ing trouble we can’t get out of?”

This was risky business for a comic. This wasn’t some fun roast, where the fan was hoping to be ripped a new one. She asked the crowd to show Dave some respect – politics aside, he seemed like a nice guy, and showed real guts getting up there. And it’s not like the whole house was on Schumer’s side – the boos and even some walkouts made that clear.

“I don’t want to hear that. We wanted to have a good night without distractions with the politics,” said Bryon Infinger.

“It’s a bit much,” echoed his wife, Chrissy Infinger.

They both said everybody has a right to their opinion but thought Schumer went on too long.

Her raunchy remarks about gun violence caused more boos from the audience and walk-outs:

In order to walk OUT of a Amy Schumer “concert”, one has to be dumb enough to walk INTO an Amy Schumber “concert”.

How does that even happen…???

How does that even happen…???

They thought it was an hilarious Jeff Dunham event after hearing the headliner was a real dummy.

Schumer clearly stank worse than a Walter fart too.

To be honest, Amy Schumer can be *very* funny. I’ve listened to her on NPR WWDTM, and she can display amazing feats of quick wit and snappy comebacks during the most unexpected times.

Then again, whenever politics comes up, the whole thing goes straight off to the Left, as expected.

“…do you worry he’ll be impulsive and get us in a lot of f—ing trouble we can’t get out of?”

Schumer apparently isn’t current on how Hillary and Obama screwed up Syria, Lybia, and are now working on Yemen with the same sloppy jackhammer.

What an ignorant pig.

You left out Russia, fast and furious, video man to jail though innocent, fu*king over Israel, backing Turkey and the monster running it, destroying the FBI, the IRS, and State and DoJ. The woman has ruined and tainted EVERYTHING she has touched.

You left out and probably had anyone who really complained about any of that killed.

There is a term that we use in the country for people like her, it is “pig ignorant”.

I thought you were going to say butt ugly!

About 40 years ago, when I was crude like Trump, we used to rate girls on what it would take to go home with them. “Six Beer Amy”

There was an even better one, but sadly it won’t clean up enough.

Since she initiated it, did they demand a refund. I think that they would ahve been on safe legal ground.

You have to understand, that what passes for “entertainment” in the US is really agitprop on a nationwide basis.

Schumer is doing what she is supposed to be doing.

Save your money. If you want to see a pig oinking for an hour, go to a barnyard. Better quality of entertainment there.

Who would pay money to listen to that fat turd ?? ABJ

I read that it was hundreds….in the Daily Mail, I believe.

Yes, you have to go to the UK Daily Mail to read news about the US……which is often swallowed up by the gossip pieces.

But they tell facts, news – and TRUTH – more than anything on air or online here…..hands down.

People are tired of having their entertainment hijacked to indoctrinate them with political bs.

Amy Schumer is just another member of the Main Stream Mafia!

Women can be funny.
Gilda Radner was funny.
Amy Schumer is no Gilda.

Amy doesn’t give a crap whether you walk out at the beginning, middle or end of her act; by then she’s already got your money.