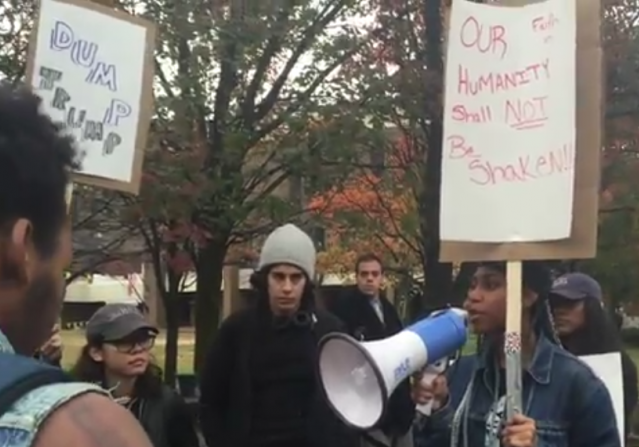 If you didn’t read Legal Insurrection, you might think that liberal arts Vassar College in Poughkeepsie, NY, just north of New York City, is an island of tolerance, understanding and freedom of thought. That’s what its website says.

But since you read Legal Insurrection, you know that for the past several years Vassar has been rocked by intellectual intolerance and antisemitism masquerading as anti-Zionism. Some faculty have been in the lead in creating this atmosphere, and the administration more often than not turned away from confronting the problem head on.

Here are a few of my posts about Vassar (you can view all of them here):

Not surprisingly, when Donald Trump won the election, the Vassar campus was shocked, as I reported in Vassar Election Reaction: “students gathered for an impromp­tu primal scream.” The student newspaper reported not only on the reaction, but how faculty and student organizations supported students who went to nearby New York City to protest Trump’s election:

By the end of election night, Vas­sar campus was filled with faces of somber disbelief. Social media outlets were flooded with indignant outcries and passionate remarks.

Around 3 a.m. of Nov. 9, frustrated students gathered for an impromp­tu primal scream on the quad. They found fleeting solace in each other’s company, screaming together in a brief and raw moment of solidarity….

The Vassar community has shown overwhelming support for students attending these protests. Many pro­fessors extended their paper dead­lines.

Organizations like VSA and ASA offered to reimburse students who don’t have the necessary personal funds to transport and attend events in the city….

An editorial by the Editors of the student newspaper seemed to capture the prevailing wisdom at Vassar:

The 2016 presidential election is undoubt­edly the most chaotic political moment that many Vassar students have been forced to contend with as mostly new voters. For the majority of white, liberal students, the loss of an overqualified Democratic candidate to a GOP pseudo-populist whose campaign represents explicit white nationalism and gender oppres­sion comes as a total shock. Many, including us at The Miscellany News, were left incredulous at the unforeseen turnout for Donald Trump, wondering how polls and pundits got the out­come so wrong, and how so much of America has fallen prey to McCarthy-era fearmongering….

The Vassar Dean of Students tweeted:

It is not surprising that the Vassar administration supports the anti-Trump backlash, an important part of which is bashing the caricature of Steve Bannon portrayed in the media. But it did shock one alumna to receive a Thanksgiving message from the Interim President of Vassar bashing Trump and Bannon. While the words “Trump” and “Bannon” do not appear in the letter, it’s clear from the context and links who he is talking about.

With the approach of Thanksgiving break, I wanted to take a moment to reflect on the texture of campus life in the wake of the recent election….

Now, as the next chapter in our country’s history takes shape, many of our students, faculty, and staff have concerns and questions about the course the nation will be taking. And they worry about actions threatened, particularly against people of color, immigrants, LGBTQ communities, and others….

As a college, a main source of our strength lies in our sense of community and in our commitment to having that community be as inclusive and empowering as possible. We believe strongly that people from all backgrounds and circumstances belong at Vassar. We commit whole-heartedly to the support and encouragement of our students, especially at a time when some in our country seem to be calling into question the rights of some groups to full dignity and respect.

We also have an obligation to speak out, and we are doing so. I have joined a group of more than 100 college and university presidents in writing to the president-elect urging him to condemn the hate speech and acts of violence being perpetrated across our country. It is a first step, one I know will be followed by continued debate, discussion, and activism on the part of our students, our faculty, and our staff.

I have also joined the historical Seven Sisters Colleges in an open letter to the president-elect’s appointee as chief strategist, who has a shameful record of homophobic and misogynistic statements and support for other hateful speech. And I have signed on to a statement calling on elected and incoming government officials to recognize the moral and societal value of Deferred Action for Childhood Arrivals (DACA) and to continue to uphold that program and expand it in the future. I have provided a link here to those documents.

As recent events make clear, much work lies ahead. But as this campus makes clear, there is much to be thankful for. I hope that all of you will find comfort and joy in your family and friends during the coming weeks. I hope further, for all of us and for those we care about so deeply, that as a country we can reaffirm our commitment to the rights of all people.

The alumna who forwarded me the Interim President’s message also forwarded her two responses (emphasis in originals):

I am writing to respond to the message that I just received from Vassar about the Presidential election. It appears to have been written with the assumption that Vassar alums didn’t vote for Donald Trump. Indeed, I know of many Vassar alums personally who did – myself included. We are very pleased with the outcome of the election. We are not racists or bigots. Indeed, it was women voters who put Trump over the top

I frankly am offended and astounded by these sentences in your message:

Now, as the next chapter in our country’s history takes shape, many of our students, faculty, and staff have concerns and questions about the course the nation will be taking. And they worry about actions threatened, particularly against people of color, immigrants, LGBTQ communities, and others.

I would like to know – as other alums who voted for Trump did – what “actions” were “threatened?” Hillary Clinton and Barack Obama were against gay marriage for a long time before changing their minds. Trump has always been for it.

Additionally, what actions have been threatened towards LGBTG communities ? Are you aware of the young and openly gay Peter Thiel, the Silicon Valley millionaire who invented PayPal, who is an adamant supporter of Trump and who has been hired for the transition team? He was recently invited to speak to the New York Press Club. https://www.youtube.com/watch?v=ob-LJqPQEJ4&t=1293s Instead of stoking inaccurate and misguided fears about what the new Trump administration will do, Vassar would do well to invite Mr. Thiel to speak. Mr Trump also hired Richard Grenell, the first openly gay spokesperson for a Republican candidate.https://en.wikipedia.org/wiki/Richard_Grenell You would do well to read up on people like Thiel And Grenell

And what actions have been threatened by the incoming Trump administration towards people of color? More than 30 per cent of Hispanics in Florida alone voted for Mr. Trump. He got a higher percentage of African American voters and Hispanics than Mitt Romney. Trump has just nominated Nikki Haley, a woman of Indian descent, for his cabinet.

I am frankly outraged at your message. It is irresponsible, misguided, wrong, and inspires fear-mongering. The Vassar administration has to recognize that many of us are very happy with the new administration. I fear you are living in a one-sided bubble.

I see that you attacked Steve Bannon, chief strategist of Trump of being a homophobe and misogynist..I have also joined the historical Seven Sisters Colleges in an open letter to the president-elect’s appointee as chief strategist, who has a shameful record of homophobic and misogynistic statements and support for other hateful speech.

I am just dumbfounded by this. On what do you base your statements?

Peter Thiel, the openly gay founder of PayPal, who has been an ardent supporter of Trump’s, and is working for the Trump transition team is also a huge supporter of Steve Bannon’s. Why would someone who is openly gay and proud, like Thiel, support Bannon?

Mr. Bannon has also hired many Jewish staffers for Breitbart – including his executive editor Joel Pollack, who is an orthodox Jew. The founder of Home Depot, who is Jewish, also just came out in support of Bannon.

Kellyanne Conway, Trump’s campaign manager, the first ever female successful political campaign manager, ( Vassar should have her up to speak, to offer a refreshing opposing viewpoint ) worked very closely with Steve Bannon and has spoken out repeatedly to say that he is not a misogynist or homophobic.

I believe that the Vassar administration has been hugely irresponsible and has cherry picked its “facts” in order to support its blind liberal agenda.

Shame on the Vassar administration.

I’m guessing there are a lot of Vassar alums, and maybe even some people on campus, who object to the Vassar administration using its communication facilities for partisan political purposes.

But the die is cast at Vassar and most other liberal arts campuses, and has been for many years. That’s unlikely to change in this political climate, where left-wing orthodoxy and intellectual repression will become even more severe in the name of anti-Trumpism. Support for Trump won’t go away, it just will be driven even further underground on campuses.

We usually judge people, at first glance, by the clothes they wear or the cars they drive or a host of other extemporaneous factors. That is just human nature. The “don’t judge a book by its cover” is a nice colloquism, but we still all do it in one form or another.

With that in mind, I think it would be advantageous at all colleges and universities, if everyone was required to wear a tee-shirt with their high school GPA and their SAT score boldly printed across the front.

That way, we would have some idea about some ideas.

Remember, this is Democrats we’re talking about.

To fully understand ‘diversity and inclusiveness’, you must embrace the horror.

How is the ground hog handling the election? If he sees his shadow does that mean 6 more months of the left’s childish behavior?

Vassar administration has been a mess for years. Conservative voices are stifled. I would steer my child away from this school.

You can turn your mind to mush for about the same cost by becoming a meth addict. And the sex is better.

Liberal Arts have become a joke. They were sketchy before, but at least they taught us to back up our assertions with a quote or two.

I read that Trump will be the first president-elect who supports gay marriage. Oppression!

I’m taking the long view… As the snowflakes realize they’re not going to get any jobs with the ‘education’ these fools are spoon-feeding them, they’ll stop enrolling in these places.

Maybe if our new President gives out student aid, grants and loans in proportion to good jobs gotten on graduation,</b? schools like Vassar will be golf course condominiums within a decade…