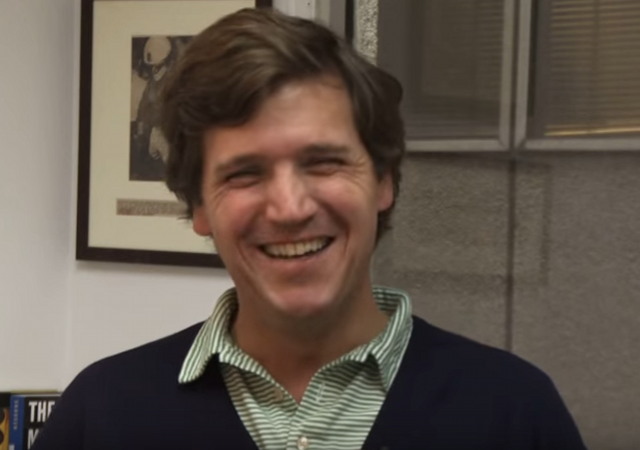 Greta Van Susteren sent a shock wave through the political media world in September when she abruptly left FOX News. Since then, the 7 PM slot which bridges the gap between Special Report and the O’Reilly Factor has been filled by network veteran Brit Hume.

When Hume took over the slot, he made it clear that the arrangement was temporary and that he would depart after the election. Now we know who will take the slot on a permanent basis with a whole new show.

Brit Hume tweeted the news that has been confirmed by TheWrap. He has been filling in for Van Susteren since she abruptly left the network earlier this year. Carlson’s new show starts Nov. 14.

Van Susteren left the network in September, later explaining that it “has not felt like home to me for a few years.” The former “On the Record” host added, “I took advantage of the clause in my contract which allows me to leave now. The clause had a time limitation, meaning I could not wait.”

The conservative Carlson is considered a favorite of 21st Century Fox executive chairman Rupert Murdoch and the move is a sign that Fox News doesn’t plan to scrap the right-leaning opinion shows that have been successful for the last 20 years in prime time.

Tucker Carlson will be very familiar to FOX News viewers as he already hosts FOX And Friends on the weekends and frequently guest hosts for Sean Hannity.

As a longtime fan of Carlson’s work, I’m looking forward to the new show. Carlson’s blend of conservative and libertarian views combined with his sense of humor should bring him plenty of viewers.

I can tell you from personal experience that Carlson is one of the friendliest and most accessible media figures in the business. A few years back I emailed him because I had a suggestion for his news site the Daily Caller. Less than 24 hours later I was talking to him on the phone.

I’ve also had numerous exchanges with people who write for the Daily Caller and they all say it’s a fun work environment and that Tucker is a great boss.

If you want to learn more about Tucker, check out the video below. It’s an interview he did with Reason TV in 2010 about his politics, the Daily Caller and more:

Serious down grade. But if he shoots Megain Kelly, I’ll be a supporter.

Watch for FNC to hire Dan Rather. He’d fit right in.

This will please the left that can’t stop with their FNC obsessions. He’s a white male. And he replaced a female. Plenty of ammunition for the smears outside of politics. Because to the left every “optic” from grouping and categorizing people is of utmost importance.

FNC Now with more side-boob, just jumped the shark on stupid. Saying you’re a big fan knocked you down a few pegs in my ranking of serious sources. He is loud and obnoxious. This does not help.

I’m envious of people who lead such charmed and perfect lives that they simply filter out anyone and everyone who either disagrees or doesn’t think like them. I guess the upside is you aren’t advocating completely stiffling their rights, so you don’t appear to be a lefty progrssive. Maybe a righty one?

Am I saying Carlson should not have his trash website? NO. Am I saying you cannot express your opinion? NO. So, if I disagree with you or things you like to see, it is something to be insulted and shouted down. Who is the one opting for censorship and denial of rights here?

If side-boob is your thing, I’m sure you can find plenty of it on the Internet. Maybe go do that and leave the conversation to serious people.

You want to talk about censorship, lets discuss how FOX is the ONLY network not in the tank for the Democrat Party. Lets talks about how ABC CBS NBC CNN NPR MSNBC etc all censor by omission – if its about Democrats caught in scandal, they cover the story with a pillow.

You want to talk about censorship, lets discuss all the Leftists shouting down conservative speakers on campus, to the point that people like Condi Rice have to cancel because of security threats.

Or we can discuss how the Democrats were just busted paying Brownshirts to start violence at Trump rallies.

I’m as a big on free speech as I am on the 2nd, and the points you raised are valid, UNLESS you are a Democrat. Then its like hearing Tony Soprano whine about getting robbed. If you aren’t a Dem, then fine, good point. But if you are, you are the last person to complain about censorship, not until you get your own house in order.

Tucker’s head is in the right place, he’s just weak. This is a good move.

Weak?? He defends his arguments. Sometimes with a passion. No idea what you refer to.

From what I’ve seen, he’ll do very well.

Tucker Carlson always felt like the GOP version of a pajama boy to me.

Can you elaborate on your analogy? Or perhaps you just think pajama boy is a great disparaging term regardless of how it applies.

Tucker has a lot of frat boy characteristics that seem fair game. Pajama is a swing and a miss.

I can see that feeling. He sometimes seems a bit “boyish”, but, IMO, that has to do with his looks and voice.