Investigating if it was a terrorist attack. 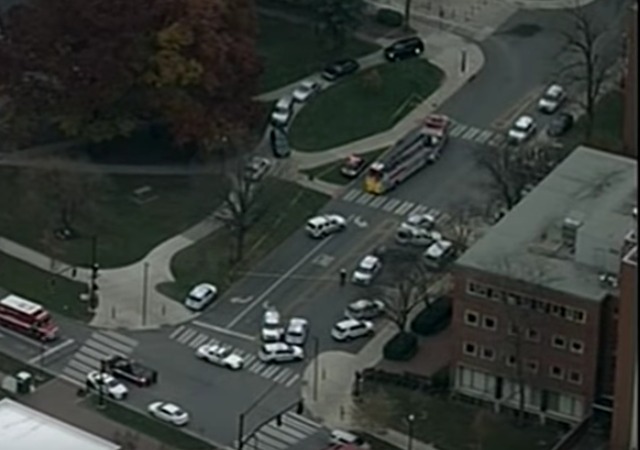 Media outlets & Ohio State reported an active shooter on campus, but it turns out the suspect mainly used a knife and a car. NBC has released the name of the attacker:

Those transported to the hospital had stab wounds:

“This was done on purpose,” he said.

Columbus Police Chief Kim Jacobs said police were looking into whether it was a terrorist attack.

One official said the man “was a ‘legal permanent resident.'”

Ohio State University president, officers, and medical personnel have spoken to the media:

Law enforcement say that the suspect mainly used a knife and car.

Ohio State has lifted the shelter in place order, but classes remain canceled.

UPDATE 1/2 : Shelter in Place lifted. Scene is now secure. ALL classes are canceled on Columbus campus for the remainder of the day.

Now outlets have reported that officers have killed the shooter.

Authorities have not released much information and as we all know, most initial reports are wrong.

But CNN has reported a few witness accounts at the school:

OSU senior Anthony Falzarano, 22, said he was in class at the time of the shooting.

“We heard a lot of sirens. I was in class and everyone got a text message at the same time for the emergency alert,” he told CNN. “Someone said they heard popping right before we got the alert, but I didn’t hear it. We are in a shelter-in-place right now in the building next door. ”

Sophomore Wyatt Crosher said he heard gunfire that he believes came from a class building across the street.

“My roommate and I heard about three or four gunshots from across the street, and soon after we heard a bunch of police and ambulances pull up across the street,” the 19-year-old said.
“We can’t see the building where the shooting happened because of a dorm blocking our view. It truly sounded like gunshots, and really soon after we heard a bunch of sirens. We can see the police cars from our dorm.”

Students/bystanders have been moved back from the scene toward Arps Hall pic.twitter.com/c9NnyGPLqF

The FBI and SWAT teams have arrived on the scene:

A law enforcement officials tells Fox News that the FBI Columbus Field Office SWAT team has been activated, and is deploying to the campus to assist local authorities with the reported active shooting.

The ATF Columbus Field Division agents are also responding to the scene, the agency tweeted.

We will update as more information becomes available.

When real danger exists, the local police are welcome on the campus.

And the leftists will blame the gun and not the shooter. Same song different verse.

Anxiously waiting for CAIR to cry Islamophobia if the killers are anything other than white.

Yeah, that it’s likely a muslim was one of my thoughts as well after reading the reports, the M.O. of the attack does fit with other attacks that one might chalk up to Sudden Jihad Syndrome. One of the sure tells will be if the MSM stays strangely silent on the name and race of the perp after police release their reports.

But not the knife or car

If reporting at about 1 PM holds true that this attacker was a jihadi sympathetic to the cause, I fully expect the MSM media narrative to tie it to Trump even if indirectly. He’s “responsible for the divided atmosphere”, or “immigrants living in fear,” or some other drivel.

a Somali male in his 20s. The motive behind the attack is still unclear

LOL! The media never learn, do they?

And if it were a “white male in his 20s”, they’d be supposing out loud that it might have been racially motivated.

No, the media never does learn. 😉

The media have learnt well, and continue to play out the best cards they have under the circumstances. “Legal permanent resident” to minimise the background of the suspect. Expect to see the following phrases in the media: ‘No motive found’, ‘no links to ISIS/Al Qaeda’, ‘Not a true muslim’, ‘Islam is a religion of peace’, ‘climate of fear in the muslim community after Trump elected’, ‘fear of deportation as a muslim’, or ‘fellow members at his mosque were shocked and surprised’. In a few days or weeks, we may see reports in the media about how the suspect ‘was critical of the US foreign policy in Syria’, ‘became more religious at his mosque’, or ‘was influenced by extremists over the Internet’. All part of the media’s, ‘Move along folks, nothing to see here” narrative.

It’s time that we begin a national dialog on how to reduce the threat posed by knives and vehicles. All reasonable people can agree that no one needs an Assault Knife or an Assault Vehicle.

And it wasn’t even one of those automatic knives. You know, the ones with the big clips.

Or a “shoulder thing that goes up”.

In fact my knife does have a clip – it helps keep the knife in my pants’ pocket!

The method of attack was exactly as laid out by ISIS for it’s world wide followers. The perp was reported to be a Somali refugee. Link to terrorism still unknown because not PC to blame the peaceful religion of Islam. I blame Trump’s hateful, islamophobic and xenophobic rhetoric for driving this young man to do such a thing.

Also all campus police need to be disarmed in order to assure that students have a “safe space”.

I’ve been trying for a very long time to explain to anti-gun people that knives and swords are better mass-attack weapons than guns. They never seem to believe me.

But look at the facts:
– Knives are smaller, lighter, more concealable, and cheaper than guns.
– Knives require less training, but nevertheless can inflict just as serious wounds as bullets.
– Unlike guns, knives never run out of ammunition, and never need to be reloaded in the middle of an attack.
– Unlike guns, poorly-maintained or rusty knives will function just as well for an attack as clean, well-maintained ones.
– Knives are quieter — nearly silent, in fact — so LEO response will be delayed, allowing time to seek more victims.
– Unlike guns, knives are available everywhere, from sporting goods to big-box to convenience stores, in any size and shape, with no background check or quantity limit on purchases.

But some people still think guns are the only thing that can cause mass-injuries. Dozens or hundreds of school children in China (where guns are unavailable) would disagree.

Why is Crosby so silent now …

“Muslim soldiers and Obama joining,
We’re finally on our own.
This fall I heard the car a coming,
Allah Akbar in Ohio.”

I’m waiting for Salon or the NYT to blame Trump.

The election of that Islamophobe triggered the guy.

Tim Kaine tweeted out he was “saddened” by this senseless gun violence.
Democrats – can’t ever wait to step on graves to make their stupidity known.

Pigs be upon him.

So… I’ve noticed no reports of anyone actually being, well … shot during this “mass-shooting”.

Were there actually any shots fired, or were those loud “popping” noises the sound of the perp’s car backfiring?

Or maybe someone in the chemistry lab amusing themselves with hydrochloric acid and zinc chips?*

————
* – The reaction results in a zinc chloride solution and hydrogen gas. If you hold a lit match next to the lip of the test tube, the hydrogen will ignite and sometimes make the tube whistle. Or, the gas could be captured in a balloon, taken outside, and ignited, which makes a pretty substantial BANG. 🙂

Upon review from other sources, it appears ONE person was shot: the attacker, by a police officer, thus ending the attack. Those shots are probably what the other students heard.

But that didn’t stop Shannon Watts from calling for further review of our “lax gun laws”, mere minutes after initial reports and well before any facts were known.

I won’t hold my breath waiting for an apology or redaction.

In response to real mass shooting events they don’t even allow the victims the dignity of having their bodies go cold. In this situation people like Kaine and Watts were probably racing to see who would be the first to display their “virtue” on the matter. It’s all about making points with the base. And the base doesn’t care about “facts,” so why should the leadership? Nothing motivates progressives like an appeal to raw emotion.

This is the practical consequence of allowing “refugees” from one of the most barbaric Muslim countries into the US and allowing them to stay. Just what crisis are they fleeing. How did they manage to flee to this country. Why won’t they be sent back when the crisis in Somalia is over?

Nitwit reported near end of video wants to know if the officer warned the murderous bastard before he shot him dead.