Rachel Maddow: Is there a DOOMSDAY PLAN for progressives?

Rachel Maddow: Is there a DOOMSDAY PLAN for progressives?

Because this might be a good time to execute it. 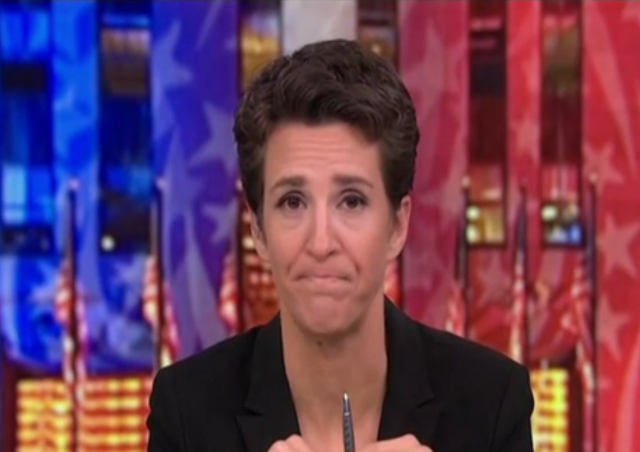 This is a tough time to be a progressive.

There is a widespread mental breakdown in nests of radicalism, like Ithaca. I take no pleasure in that. Seriously. Come on you guys, seriously, no joy whatsoever. 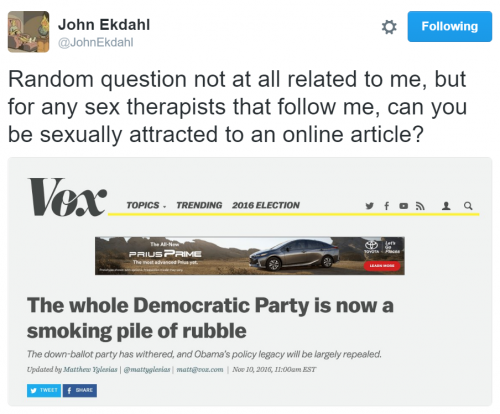 I will admit, however, that I’ve been watching MSNBC a fair amount this week because their freakout is more interesting than the Fox News football spiking.

I saw a segment where Rachel Maddow asked whether there was a “doomsday plan” for progressives. It made me smile (just a little).

Even so, her panic over this is so satisfying!

I just hope Trump and his fellow Republicans can actually deliver and give us a constitutionally sound Supreme Court for a change, because that’s where the rubber meets the road on this issue. And they also need to deliver up solid legislation protecting the unborn to put the baby murdering abortion out of business for good!

The colliding of worlds is getting to her:

I take no pleasure in any of this. But I repeat myself.

I don’t know why they’re so mad and upset.

“I take no pleasure in that. Seriously. Come on you guys, seriously, no joy whatsoever.”

You are a wicked, wicked man, William Jacobson.

Why do I keep feeling a quote from “Animal House” about to burst out ?

Otter: Flounder, you can’t spend your whole life worrying about your mistakes! You fucked up… you trusted us! Hey, make the best of it! Maybe we can help.

Wow, Rags, you’re still with us?

Figured you’d have jumped off a bridge when they announced Wisconsin for Trump.

That would indicate you don’t read very well.

I’ve known since the conventions that one crazy bitch had to beat the other crazy bitch.

Well ~I~ WILL take pleasure in it. In fact, when some of my progressive acquaintances start bemoaning the loss of “working together across the isle” I plan on fully reminding them of their glee in 2009 when I said to them that the Republican party in the 2000-2006 period had routinely and often worked across the isle with Democrats for the good of the Nation and they uniformly responded with:

The ones who are not partisan hack hypocrites will at least have the shame to admit that yes, they did say that. The ones that ARE partisan hack hypocrites, I’m just going to call them out every time I hear them say it with “wait a minute. Wasn’t it you who 8 years ago was telling Conservatives that ‘elections have consequences?'”

The question is if I will remind them that “their chickens have come home to roost.” I haven’t decided yet.

Any concern Madcow has for abortion rights is purely academic, it must be remembered.

What bull in its right mind……..

First of all, ‘drunken sailors’ is redundant. Second, no sailor ever got *that* drunk.

There’s always artificial insemination. It’s the only way she’ll be able to experience the sacrament of abortion.

has anybody seen the turkey baster?

She needs a safe-space that is filled with leftist narratives and keeps reality outside. Like she had until Tuesday.

She looks like someone stole the batteries out of her …. Favorite appliance.

No way. She wouldn’t use anything that comes from the patriarchy.

Yes, Rachel, there is one. We’ve been living it for nearly 8 years now. Had Hillary been elected it would most assuredly been a “Doomsday” one.

I take no pleasure in any of this.

That’s very generous of you … it leaves more for us.

Why is she so worked up? They’ll regroup, have fun protesting and ridiculing Trumpik and his followers and four years from now you’ll be saying “President Elect Harris”.
What’s the plan for conservatives, though?

If that’s hat R’s have to offer? Then I’ll happily vote for Harris.

You would have anyway.

You don’t fool everybody here

Duhh, gee, I dunno Tennessee!
Maybe uh…
1) Repeal Obamacare and replace it with a genuine competitive interstate market place and HSAs.
2) Appoint and confirm an originalist to replace Scalia
3) Close the southern border to restrict the flow of illegal alien fraud votes to all states
4) Stop the flow of terrorists disguised as Syrian refugees.

They beat a man almost to death today, then stole his car and drug his body down the road.

Everyone got on Trump’s case for not denouncing some wacko comments on alt-right, where is President Obama? Why isn’t he taking the podium and lecturing: “My fellow democrats, this is not what we do…”

That wasn’t at any kind of a protest.
http://www.thewrap.com/did-this-man-get-beaten-up-over-supporting-donald-trump-video/

From the link: “What’s unclear — despite the conclusion some have drawn — is whether the man is being beaten for being pro-Trump, or if that’s just something people are yelling in a gross attempt to be funny”

In related news, a immigrant youth shouting “Allahu Akbar! Death to America!” blew himself up, injuring six. Police are still unclear as to his motive..”

Or they robbed him and then called him a cracker.

Make you Leftards live by your own rules. Sucks to be you.

And don’t forget the 5th grader on crutches who got beaten up for voting for Trump in a mock election.

Not to worry, the beating was mostly peaceful…

Nope, just what you thugs do every time you think you can get away with it. You are why my truck gun is a folding stock AK with 30 round mags of hollowpoint.

A pity the guy wasn’t armed.

“We’ve been killing black babies for over one hundred years”…. FIFY

There is a used, tightly wound ball of yarns she could play with. The Democrats certainly no longer have a use for it, after it frayed and nearly exploded upon reaching critical lies.

Of course there is a doomsday plan. It just won’t survive contact with the enemy for more than 5 minutes, like any plan.

I suspect their doomsday plan involves a lot of protests in the street, your barista lecturing you about abortion rights and a new hashtag.

Oops. Another false narrative you have to abandon. But then, you’ve gotten really good at abandonment.

You know, now that I’ve had a few days to look at the data, I think that the market tanking was more about individuals thinking that instead of the expected clean Clinton win that it was going to be very close and there would be weeks or months of uncertainty as to what the next policies would be.

Once it became clear that wasn’t going to be the case, I think that the investment community got its head screwed on straight.

I do wonder if feminists will express “frustration” with the black vote not having their back when it was their turn for history.

This behavior on the part of Rachel Maddow is self-centered to the point of childishness. One of the things I liked about the circular firing squads of the Repubs after the last two Presidential elections was that the question those people asked was “What are we doing wrong.?” That capacity for self-examination is refreshing compared to this infantile nonsense.

I have seen far too much of this crap over the last two days.

These creeps assume that they are the sum and substance of What is Right. This is hubris.

After weeks of Democrats telling us to ignore anything coming from “Russia” (via WikiLeaks), Maddox did her best Joseph McCarthy impersonation using stuff from “Russia” tonight.

An overrated bore. Ever try reading one of her idiotic books?

Alas, the progressive doomsday plan is: “The Government will save us.” Full stop.

This becomes problematic when all three branches of the federal government and thirty-one state houses are all in GOP hands.

Weep for the poor progressive.

Weep for the poor progressive.

No. MOCK the “poor progressive?” That I will do ALL DAY LONG. Those “poor progressives” would take the food out of your children’s mouths and the clothes off your back if they think for a second that you might have anything more than “average” because “that’s not fair.”

The modern Conservative recognizes that equality is the equal opportunity before God, man and the law of the individual to prove unequal talent.

That Maddow dude sure is angsty.

Rachel, dear – what you just experienced WAS conservatives’ doomsday plan for progressives. Glad you noticed!

It’s amusing. I spent the last 8 years living with President who hates me. Who thinks I need to be “fundamentally transformed.” Razed to the ground and be rebuilt. And I didn’t quit. And here they are, wetting themselves.

Progressives should all move to Venezuela.

They could actually live under ALL of the policies they advocate for.

Its a veritable paradise for them. Just ask Sean Penn and Oliver Stone.

Or North Korea.
Or Cuba.
Or Zimbabwe.

Calm down Bruce. We will soon have the media saying that Professor Jacobson promotes violence.

It was comical to watch her election night. I thought her head was going to explode looking for someone to blame for the Democratic disaster.

Here’s a plan. Don’t nominate such a blatant criminal and pathological liar.

But I forget, these are liberals who can do no wrong.

Prof Jacobson, I felt the same way. Preaching to the choir is just boring. I couldn’t get enough of MSNBC, CNN, the Young Turks etc.
I especially enjoy when they blame the media for favoring Trump or say that Hillary won the popular vote. Totally ignoring that Trump didn’t campaign to get the popular vote and everyone knew the rules going into the election.