Anti-Israel activists of Students for Justice in Palestine will have company at George Mason U this weekend. 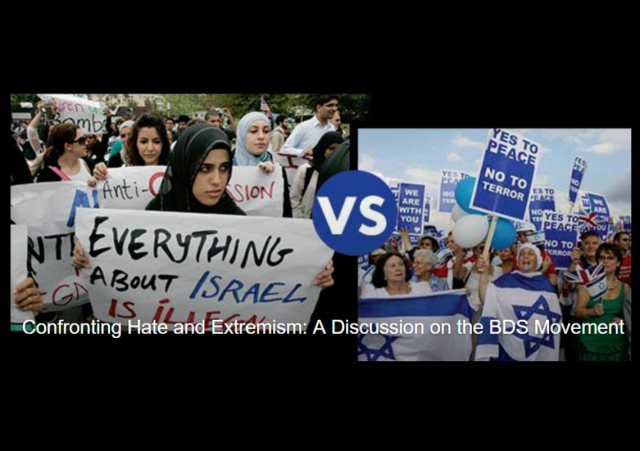 So this is interesting.

Students for Justice in Palestine and its related groups are responsible for much if not most of the anti-Israel activity on campuses. We have documented dozens of incidents of intimidation and violence, scroll through our SJP Tag.

For additional background, see reports by The Tower Magazine, The ADL, NGO Monitor and AMCHA Initiative.

This is one of the milder shout-downs and stage takeovers by SJP:

The umbrella organization for SJP, National Students for Justice in Palestine, is holding its annual conference this weekend on the campus of George Mason University to train anti-Israel activists to carry out the mission on campuses of the Boycott, Divestment and Sanctions movement. 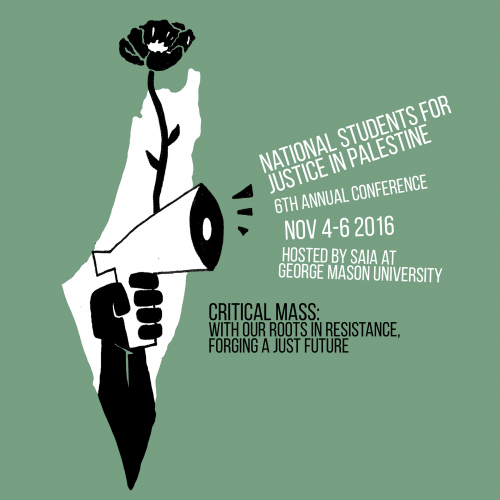 In an interesting development, GMU Christians United for Israel chapter is organizing counter-programming on the GMU campus, Confronting Hate and Extremism: A Discussion on the BDS Movement:

You are invited to a GMU Christians United for Israel panel discussion featuring leading experts on the Boycott, Divest, and Sanctions (BDS) movement, which seeks the destruction of Israel and has brought violent, confrontational tactics to U.S. campuses.

An extremist BDS organization, Students for Justice in Palestine, is holding its annual conference at GMU on the same weekend. SJP rejects peace and compromise between Israelis and Palestinians, promotes hatred of Israel and Jews to students, and employs tactics — such as disrupting events and shouting down speakers — designed to deny students their free speech rights.

Please join us for an engaging discussion and Q&A on the beliefs, tactics, and goals of SJP and the BDS movement — and how to combat hate and extremism on campus. The event is free and lunch will be provided.

One of the speakers is Jonathan Schanzer from the Foundation for the Defense of Democracies, an expert on funding of anti-Israel groups, including SJP:

There also will be a protest organized by recently formed GMU Turning Point USA chapter, Peaceful Protest Against Students for Justice in Palestine:

Students for Justice in Palestine (SJP) preaches hate against Israel and Jews, and denies students the right to free speech by disrupting speakers and intimidating students.

The hate, anti-Semitism, and endorsement of violency by SJP members has been documented online by the human rights group Canary Mission.

Many members of SJP and the Boycott, Divestment, and Sanction (BDS) movement use anti-Semitic rhetoric, promote violence, and glorify terrorism against Israeli civilians.

SJP is funded by a network of extremists who were implicated in the largest terror finance case in U.S. history.

Join us in telling SJP: Anti-Semitism, attacking free speech, and promoting hate will not go unchallenged on our campus.

I spoke with one of the organizers who stated that there was no intention to turn the protest into the kind of free speech suppressions that accompany so many SJP protests, such as shout downs of speakers, banging on windows and doors, and other threatening actions.

The counter-programming and protest are interesting developments because they are proactive in making the case against the type of threatening conduct SJP represents, rather than just criticizing after the fact.

It will be interesting to see how the SJP activists react.

This works and I’ll repeat my comment about the Jew baiting Pelod. Pack the meeting. Own the Q&A, and deploy enough loud chanting protesters in order the force the local media to cover it.

The pro-Israel voice has been supine too long, abandoning the field to jihadis and their Jew washing fellow travelers.

Exactly. And I’m weary of defending people that won’t fight for themselves.