“So far, 130 officers have died nationwide.” 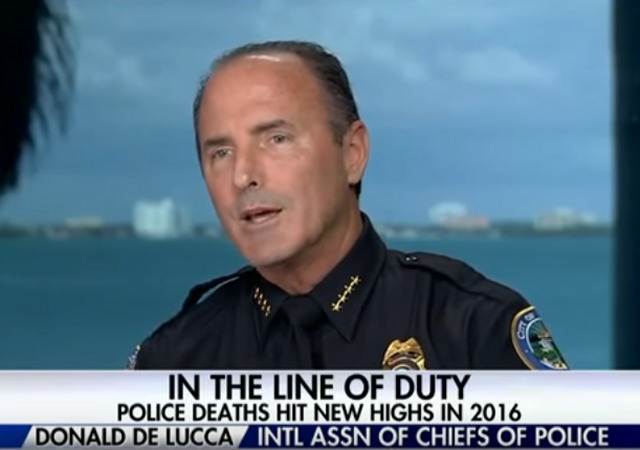 Donald Trump earned tremendous support from the law enforcement community by promising to stand up for its members. They need an advocate like Trump in the White House. Recent reports indicate that the number of police deaths has risen significantly since 2015.

A total of 60 law enforcement officers have died in firearms-related incidents in 2016, marking a 67 percent increase since 2015, the National Law Enforcement Officers Memorial Fund reported.

Citing a preliminary report from January 1 through November 23, the organization said that Texas has seen the most fatalities this year with 18. So far, 130 officers have died nationwide.

San Antonio Detective Benjamin Marconi was the 60th officer shot to death this year, compared with 41 in all of 2015, and the 20th to die in an ambush-style attack, compared with eight last year, Craig W. Floyd, president of the National Law Enforcement Officers Memorial Fund, said.

An ambush-style attack does not necessarily involve someone lying in wait for police officers; it’s any shooting designed to catch police off guard and put them at a disadvantage, Floyd said.

“There usually is an element of surprise and concealment involved,” he said, and it’s unprovoked.

All part of the Obama/Jarrett/Soros plan.

But The Donald wasn’t.

Obama/Jarrett/Soros were lame enough to bet the house on an incompetent putz named Hillary Clinton.

Abortion rites. Life is cheap. Law, morality are negotiable in a Pro-Choice society. Besides, the goal is class diversity (i.e. colorful clumps of cells), not diversity.

RIP To those officers. Aleister PURPOSELY leaves out the most important part.
The rise in police officer killings is police killings by White cop killers.

Until LEOs and media people focus on white cop killers the way they do black cop killers,the increase will continue.

M1, please show me where the police care what color the person trying to kill them is. The media continues to race bait both ways. The police couldn’t give a crap.

You are correct about the media race baiting. Both the liberal and conservative media do it( this site included.) If you can go to Blue Lives Matter.com and look for the post written by Jason Sondron. It is a tribute to his dad Patrick Sondron,who was killed in the line of duty. Pay attention to the part where he describes his father’s killer. I could say more but read the post.