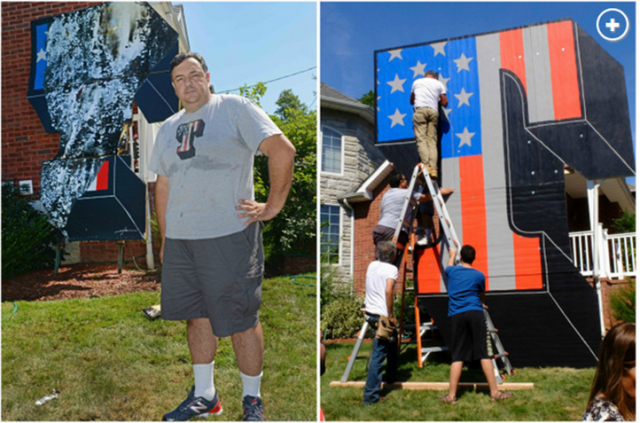 Pirozzollo’s challenges continue, as a New York City court just issued a $2400 fine for his display.

In August, Pirozzolo received a summons from the Department of Buidlings. It said because the sign was over 12 feet tall, he was violating a zoning law. But Pirozzolo has a different take on the “T.”

“First of all its not a sign. Artwork is not governed by restriction zoning regulations for signs,” he added.

Still, at a recent DOB hearing, officials ruled it was a violation and ordered Pirozzolo to pay.

.. [Lawyer Charlie] DeStefano laid out a beautiful case on my behalf. He spoke to my rights of freedom of speech and constitutional issues. He spoke of other types of symbols or decorations people and religious buildings use, all in all I could not have asked for a more eloquent defense.

Unfortunately, as explained by the judge, his role in this matter is only to determine if a violation existed at the time the officer visited my home. He is not allowed to rule on issues of constitutionality. Consequently, neither is the appellate judge if I were to lose this hearing. The type of fine that was issued classified my “sign” as an accessory sign. Which means that there can be no mitigating circumstances. Meaning the penalty could not be reduced to $1 for example, because of the circumstances.

Pirozzollo is intending to take the case to the New York State Supreme Court. However, in the meantime, he has to pay the fine promptly. To help allay costs and provide monies for other inspirational artwork, Pirozzollo has established a GoFundMe page.

…New York City and Mayor deBlasio are hungry and they want their money now. This is what Donald Trump meant when he said the system is crooked, the system is rigged. In the event of being vindicated by the NY Supreme Court I will be able to apply to get my own money back. I wonder if they pay interest.

I think as long as his commissioned piece is not a naked Hillary statue, we can all rest easy.

Yuge letter “T” is not protected by the 1st Amendment, only the letters “H” and “O” are. This is a prime example of selective incorporation. Check or money order please…..

Weirdly,if I recall correctly, the “Supreme Court” in New York is the trial level court. The highest level court is the “Court of Appeals.”

So which court are we talking about? I’m not sure how administrative or municipal law decisions are appealed.

A wild guess is that this was simply a departmental hearing or appeal with the “judge” being an employee of the same department who issued the fine.

Which would basically mean that once all administrative appeals are finished, he will take it to an actual court of law.

That’s exactly it. The Supreme Court is the lowest real court to which he can take it.

Sounds like a home owner, not conducting a business on his private property (at least not a business that was being promoted with his “sign”) was fined under a code meant to regulate a business activity (advertising).

The statue is a good idea. I hope the wife approves.