But wait. Where was the disgust over the naked Donald Trump statues? 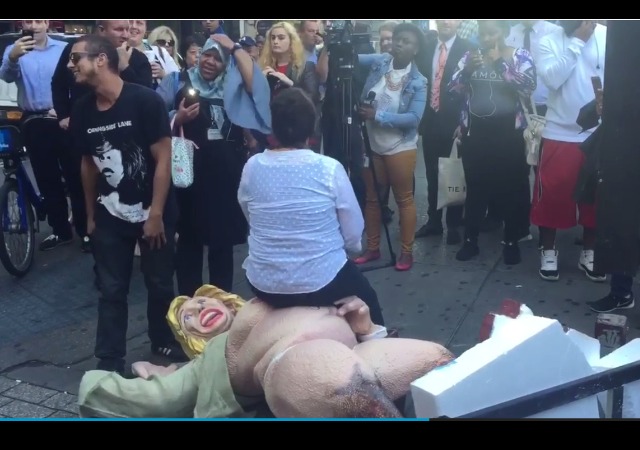 Someone placed a naked statue of Democrat presidential candidate Hillary Clinton, with hoofed feet and a Wall Street banker trying to suck her breast, in Manhattan. It caused fights between those who supported the artist and offended women.

The statue appeared outside of Bowling Green station at 6AM:

An irate woman knocked down the statue, breaking off parts of it and sitting on it around 7 a.m., while the unnamed artist and a male supporter tried to save it, witnesses said.

The woman called police, who told the unnamed artist to move it. The statue was gone by 7:30 a.m.

“Yeah, I hope they put you in cuffs,” the male artist said during Tuesday’s brouhaha. “I’m just trying to preserve my art here.”

“This is my workplace, I have to look at this?” the upset woman said.

As she sat on the statue, a man shouted out: “Does anyone have a forklift?”

People near the statue said this woman actually tried to attack anyone who tried to put the statue back up:

Before that woman’s intervention, most passersby seemed to view the statue as harmless, witnesses said.

“When the lady started kicking it, then it got serious,” said Demetrius Aspinall, 22, who works at a nearby farmers’ market. “Just because you don’t like it, you shouldn’t be taking it upon yourself to destroy it.”

The media has called this a hideous and grotesque statue. But where was its outrage when numerous naked Donald Trump statues appeared across America? My coworker Leslie pointed out the hypocrisy between the media’s reaction to Trump and to a mural of Hillary in Australia. The Hill actually foreshadowed this event:

..Picture, if you will, a naked statue representation of Hillary Clinton or Barack Obama, erected (erm…) by cover of night in Times Square and on the boardwalks of Los Angeles, the sculptor’s artistic license given free reign. Imagine the sagging breasts, the flabby tum tum, the far-less-than-pert buttocks, and for the coup de grace, creative depictions of the male genitalia. Would the sculptor go very short, or very long?

It is impossible to quantify the rage that our media would unleash on the nation and heap upon sexist and racist, so-called artists. See, there is at this point, no irony in, no shame from, and no end to, the parade of contradictions that mainstream media will foist on its viewers and readers.

The NYC Parks Department even made a jab in its statement about Trump:

NBC filled its report with snark and ridicule against Trump. The network didn’t use the same adjectives to describe Trump as media is using to describe the Hillary statue.

If by “fight”, you mean “uncontrollable vomiting”, then I’d agree with you.

If I saw a statue of Hillary nude I would riot too.

She of course is never gonna admit the number, but is it possible for us to reach a consensus as to what her likely weight range might be?

Hard to say; but it takes a lot to attract a crowd in Manhattan.

After seeing this, I have a bit of empathy for, though not necessarily agreeing with, those who have need for a “safe place.” Can this election cycle get any more bizarre?

The story doesn’t mention what charges were brought against the vandal. Must just be an oversight. Will she go to jail? Pay a fine? Do community service? It would be nice to know.

You must be joking. This black woman will never come before a magistrate or judge. That would be racist.

The statue is not anatomically correct. While the hooves are spot on, she is missing a penis and a big ole drooping ballsack.

And a colonoscopy bag.

Add another to the long list of reasons I’m glad I don’t live in NYC.

I didn’t like them because they were ugly, intentionally so, by mediocre “artists” whose motivation was to be rude.

The world can be a better place than this.

I sort of agree. I don’t like any of the three, but if the Trump statues can happen, then so can the other two.

They were intentionally ugly as part of the satire.

BTW — did anyone actually watch the video? The woman who squatted on the statue was white.

Somebody should have told the fatazz who sat on the statue that the only difference between her and the statue is skin color.

See it’s all Trump’s fault! He had to cause this women to go nuts!

If Trump was not running this would not have happened! 🙂

I’d like to point out that George W. Bush did absolutely nothing to prevent this.