“US intelligence community has to decide what they’re going to tell him.” 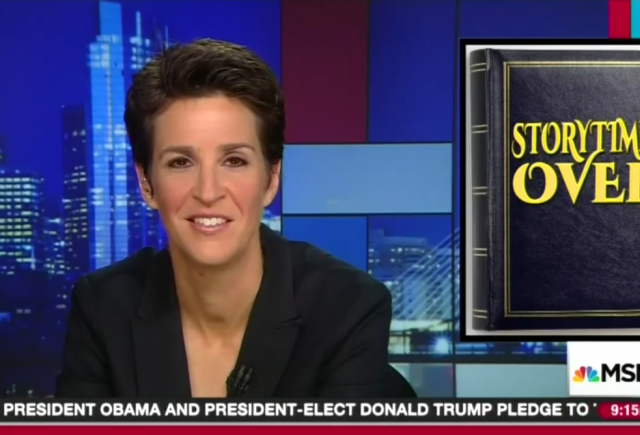 Rachel Maddow has wondered out loud whether President-elect Trump might be under the influence of Russia.

On her MSNBC show this evening, Maddow suggested that Trump might betray the most sensitive intelligence to the Russians—including the identity of US spies. She questioned whether US intelligence agencies should provide Trump with such information.

American pilots are making bombing runs in Syria these days, we are actively, militarily engaged in a part of the Syrian civil war. Russia, depending on how you define it, is sort of on the other side of that conflict. They’ve got their one creaky old aircraft carrier over there in the Syrian theater and everything.

Would you tell him the name of the spy that we’ve got in Putin’s inner circle, hypothetically? Do you tell him, hypothetically, what the cyber command is about to do to nuke Putin’s personal secret bank accounts in retaliation for him hacking into our election? Do you tell him? If you’re the US intelligence community, can you trust the President-elect with that information?

I continue to be amazed at the false narrative in which the Left so desperately believes.
>
It was Hillary Clinton who had her own email server and played fast and loose with classified information and yet the Left continues the bizarre narrative that is is Trump who is a danger with America’s secrets.
>
We have watched day in and day out as Clinton supporters have attacked, beaten, insulted and in just about every other way imaginable went after Trump supporters. Some company CEOs are threatening to fire anyone who voted for Trump and yet they continue to claim that it is Trump and his supporters who are violent and such.
>
We watch as liberals claim that now the election is over and Hillary lost that all investigations into her email, classified information, Clinton Foundation, and other crimes be dropped because the loss of the election was enough of a penalty for her and what the conservatives wanted. Now that conservatives continue to demand an investigation, a trial if the evidence supports it, and jail time if anyone is found guilty, the Left continues to claim how this issue is politically driven when in reality it is the Left who wants it to be political and the Right wants it to be the law and order issue is always was.
>
While these are the main three, there are certainly others.

Maddox has a point. Especially after Trump allowed 50% of US uranium stocks to be sold to the Russians. . .

He didn’t, as of course you know, but neither did Clinton. Even the false story you’re misremembering claimed 20%, not 50%, and of the uranium deposits, not stocks. But the story was false. (1) The State Department had only one vote on a committee of nine; (2) whose role was not to approve or reject such transactions but merely to evaluate them and make a recommendation to the president; (3) there’s no record of how State even voted on the question; (4) State says that Clinton never showed any interest in this committee, or told the State representative on it how to vote, and there’s no evidence that this is not true; (5) the donations that could, in principle have influenced Clinton turned out to be not $145M but $1.25M; (6) in any case the USA never sold anything to Russia — the story is about a Russian private company buying 51% of a Canadian company which owns mines in the USA.

State says that Clinton never showed any interest in this committee

Oh, well, if State says something about Clinton, it must be pretty solid, huh?

(Come on, Milhouse, as you well know, I was making a sarcastic point based on multiple sourced stories about cash flowing into the Canadian division of the Billy Clyde Clinton Foundation, then after being nicely laundered, was then transported over the border, without disclosure of where the cash came from. Now, go read this NY Times article and get back to me with your apology: http://www.nytimes.com/2015/04/24/us/cash-flowed-to-clinton-foundation-as-russians-pressed-for-control-of-uranium-company.html?_r=0 )

If in the face of irrefutable evidence that Trump is the Kremlin candidate your response is “But… but… but… uranium! But… but … but… she’s a socialist ” you should really quit reading infowars and give Newsweek a chance.
If you don’t care much about national security, that’s your right, of course. Just don’t pretend otherwise.

Come on, Sandbox! We get involved in foreign elections all the time. How much US taxpayer cash did Obama funnel to Bibi Netanyahu’s opponent?

If you voted for Hillary, you’re the one who doesn’t care about national security. Did you hear about that email scandal that’s really a national security scandal. It’s been in all the papers and on TV and the internet.

You should really catch up on that if you’re concerned about national security.

She was OK when Hillary had all that same information on her server!

After 8 years of whining about how nobody respects Obama, she’s going to be on a crusade against Trump. If only anybody watched her show, it might matter. Bah!

Maddow isn’t allowed to play with matches or scissors. Says so right in her contract.

As Reverend Al would say, “Self aware we much?”

Well, to be fair, the US intel community hasn’t had to worry too much about what they could tell Barracula, because he ignored them.

So this will at least be a new dilemma…

Well to make her freak out even more…Newt Gingrich, Chris Christie and Rudy Giuliani all now have access to America’s deepest secrets.

We can make her a deal: whenever anyone, including Trump, places American intelligence at risk by accidentally or deliberately taking large quantities of critical confidential data out of secure storage and making it accessible to foreign intelligence services and random hackers, we prosecute them.

It’ll be a change from current practice, but I’m for it.

Why do these people still have jobs?

They got everything wrong – the pollsters, the analysts, the pundits. They cheated by putting their thumb on scale (more like their butts), they collaborated with Team Clinton to steal the primary from Bernie, they were caught leaking debate questions to Hillary, their smug insults and full frontal bias provoked and energized conservatives who would have sat this one out. They lied to their own viewers, they blind their own Party with false narratives.

So why do they still have jobs? If I owned a network, I would send them packing. I can hire interns from HuffPo and Dem Underground to get this level of incompetence.

Rachael Maddow? Isn’t that how you spell idiot? (That was her doing Hands up don’t Shoot)
I agree with Fen, why do these people still have jobs?

“So why do they still have jobs?”

Because they did precisely what they were hired to do. And they will continue to do it.

But, we get to laugh even harder at them now. It didn’t work. It will not work anymore.

Madcow is a delusional fool! Crooked Hillary is the one who put our national security at risk for years!

Standard Democratic tactic. When caught with their hands in the cookie jar, they’ll say, look how far down you have to reach to get anything—the Republicans have been stealing cookies!

If the point of this post is that MSNBC doesn’t employ the brightest people, I wholeheartedly agree. I would much rather listen to a Kremlinologist talk about this issue.

Hmmm, Hillary was careless with our nation’s intelligence, therefore the big question is how can we entrust such information to Trump?

Seriously, anybody would be better than Hillary on this.

Hey Rachel, how many minutes does it take for us to launch our nukes? Oh, right…..Sir Edmund Cankles would never expose classified information. I forgot. Never mind.

Well Mrs. Madcow, I wouldn’t trust you with a potato gun so let’s just leave it at that.

He sure does have some weird opinions.

Let’s be fair to Maddow. Reliable MSNBC sources say that Rachel was out to lunch every single time Hillary and e-mails were mentioned in the same sentence. Just unfortunate timing.