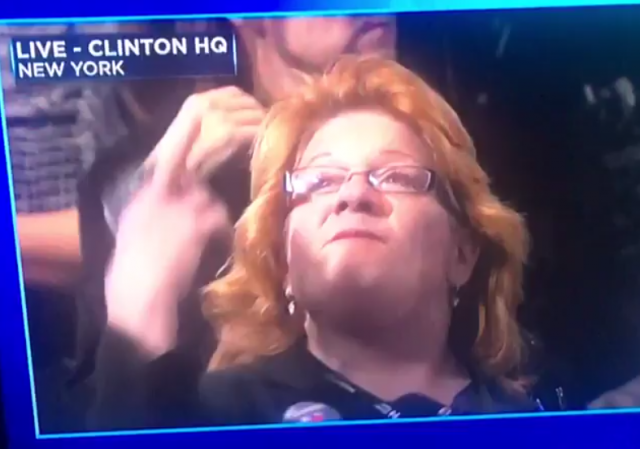 Trump won the presidential election and the left’s tears were everywhere.

That moment you realize nominating a FBI suspect was a mistake. #ElectionNight pic.twitter.com/yHg60T9yz6

Tears at Clinton HQ, as the White House seems to be slipping towards Trump #ElectionNight https://t.co/48chdVvDCj https://t.co/QqbTcxtw22

Grief and Disbelief at Clinton HQ as Donald Trump Pulls Ahead: 'I Feel Nauseous,' Aide Says https://t.co/cCAHkwBV7I via @people

Here are some tweets:

Hardest part of tonight: reassuring my 12-year-old daughter. I told her she will be ok no matter what. Wish I could say same for us all.

Javits Center is like the waiting room at a cancer center.

The non media people who know I'm media keep checking in with me, like I have any fucking idea what is happening right now

how do we explain this to our kids?

I didn’t quite understand how much white people hated us, or could at least live with that hate. Now I do.

Remember that time the Supreme Court gutted the Voting Right Act? Good thing that hasn't had any negative implications, huh?

One question has haunted me for the past year: What does it mean to be an American? Now that haunting becomes my obsession.

My country is a different place than I thought it was when I woke up this morning.

The non media people who know I'm media keep checking in with me, like I have any fucking idea what is happening right now

how do we explain this to our kids?

Great googly moogly……..that is a bunch of disturbed people!

I mentally made the same gesture as the first photo… but to MSM and all the forces that have conspired to suppress reality.

The can suck it.

The tree of liberty just sprouted a brand new shoot, in hope let it grow strong.

The schadenfreude is delicious!

I had the lasagna…

Defeat is hard to accept after your team already bought and paid for a win.

At least they cancelled the fireworks, hope they got a refund.

These tweets contain the explanation for the election results: such intense prejudice, disresprt for others, and willingness to lie to themselves and others!

They are also extremely ignorant. I think they actually think the narratives are true. And they fail to see that they are themselves the enemy whom they describe but assign to others.

Funny, how being on the wrong side of history can take the air out of your lungs.

All morning the network talking heads are reliving the concept that, perhaps, Hillary really wasn’t that great of a candidate after all.

Give ’em a little time and they will eventually realize that Barack, a great campaigner, really wasn’t that great of a President after all.

The Moment you realize:

Churches and Synagogues will no longer be targeted
Common people will not be targeted by the IRS for their beliefs
Illegal aliens who rape, murder and drive drunk are going back
The EPA won’t get to take our air conditioners away
Common Core is dead
The Supreme Court will quit writing law
The Asshats at the VA better be updating their Resumes.

We are sure hoping for all of that.
Gotta wait, though.
There is something about political promises …

It’s especially delicious because these are the people who shunned, othered and ostracized us for having a different opinion. They retreated into echo chambers and safe spaces, reflexively shouting “racist sexist homophobe” at any criticism that threatened their fantasy narrative.

I’ve been reading the WaPo opinion columnists all morning, disgracing themselves with little temper tantrums. I want to ask:

“why do you still have a job? You are too out of touch with Americans to be a journalist, and you gave poor analysis (if not ourtight lies and spin) to the liberals who trusted your expertise. If I was in charge of WaPo I would fire all of you. You are worse than useless. You handicapped your readers”

Yes, it’s ‘delicious’, but I’d let the echo chambers, safe spaces and the lieberal “news” rags remain.
Let the deaf, dumb and blind remain so. Let the duped remain duped.
Then they become so marginalized, so insignificant they they will be nothing more than a minor inconvenience.

Like a fetid pile of shit, Barry Soetoro’s legacy will now be scraped off the nation’s shoe.

“What we have been seeing worldwide, from India to the UK to the US, is the rebellion against the inner circle of no-skin-in-the-game policymaking “clerks” and journalists-insiders, that class of paternalistic semi-intellectual experts with some Ivy league, Oxford-Cambridge, or similar label-driven education who are telling the rest of us 1) what to do, 2) what to eat, 3) how to speak, 4) how to think… and 5) who to vote for.

But the problem is the one-eyed following the blind: these self-described members of the “intelligenzia” can’t find a coconut in Coconut Island, meaning they aren’t intelligent enough to define intelligence and fall into circularities?—?but their main skills is capacity to pass exams written by people like them. With psychology papers replicating less than 40%, dietary advice reversing after 30 years of fatphobia, macroeconomic analysis working worse than astrology, the appointment of Bernanke who was less than clueless of the risks, and pharmaceutical trials replicating at best only 1/3th of the time, people are perfectly entitled to rely on their own ancestral instinct and listen to their grandmothers (or Montaigne and such filtered classical knowledge) with a better track record than these policymaking goons.”

Oh the tears of the insular chattering class, so delicious…

So load ’em all into cattle cars already, and transport them to their Safe Spaces.

Someday … and it may take decades … some of them will realize that their enemies aren’t some mystical white supremacist patriarchy, but just plain Americans.

If you voted for Trump, don’t be the “deplorables” they dismissed you to be. Be better than them.

No, that’s the same Civility trap we always fall for.

I don’t have any need to Virtue Signal I’m not their “deplorable”, any more than you have a need to preen you are not a rapist.

And I already know I am better than them. It’s demonstrable.

But I’m not reconciling with the Little Eichmanns that would be shipping me off to the re-education camps had they won last nite.

We have a ton of work to do, don’t go wobbly now.

bitches please….go make me a sammich…..
or something..

Liberals are leeches, parasites. They don’t “make” (i.e. produce) anything.

I recommend NOT eating anything prepared by a prog for a while. They’re nasty little buggers.

The blow torch has just been elected time for you to
grow up and act like an adult or………….

Now, they get to have a taste of how we felt eight years ago when Obama was elected, and again, four years ago when he was re-elected. Now, we have 94+ million people out of the work force, people mortgaging their houses to afford health insurance (not to be confused with health care), the further dumbing down of education with Common Core, a destabilized Middle East, thousands more burdensome regulations, the worst race relations since the early 60s, etc, etc, and so forth.

They are projecting their failure on everyone but themselves.

I seem to remember awhile back someone saying: Elections have consequences. BOOM !!

Now is the time for Trump to undo every thing Tyrant Obama the Liar has done to us in the last 8 years.

Given that most everything lame duck has done in the last few years has been by executive order, Trump can and should immediately undo most all of of that after taking command of the “pen and phone”…

I think that people on the coasts (who are so much smarter than the rest of us, and therefore feel the need to rule the rest of us) either have no idea or have forgotten who we are as a nation.

We tried the last eight years of liberal nonsense and see where it has gotten us. The people it affected the most made it clear that it’s time to clean house and change course.

I was brought up not to laugh or gloat while someone is hurting but I can’t pass up the parents (i.e. Adults) who don’t know what to tell their kids. Being a father of three teens I simply said, “Trump is our next president on January 20th. Any questions?” My kids said “nope” and went to school.

I am sure it won’t be difficult for parents who are struggling with this.

The liberal reaction is remarkably similar to the reactions I’ve seen from Glenn Beck and over at redstate.com

I can’t believe I ever defended Glenn Beck. When I get smug, remind me of how stupid I was.

America saw through you.

The victors get one day to gloat.
It’s in the Constitution. 🙂

The best part for me is that the GOPe has to actually do something now that there are no more excuses about lacking the House, Senate, or White House.

If there is anyone out there who still doubts that America is a place where all things are possible, who still wonders if the dream of our founders is alive in our time, who still questions the power of our democracy, tonight is your answer.

It’s the answer told by lines that stretched around schools and churches in numbers this nation has never seen, by people who waited three hours and four hours, many for the first time in their lives, because they believed that this time must be different, that their voices could be that difference.

It’s the answer spoken by young and old, rich and poor, Democrat and Republican, black, white, Hispanic, Asian, Native American, gay, straight, disabled and not disabled. Americans who sent a message to the world that we have never been just a collection of individuals or a collection of red states and blue states.

We are, and always will be, the United States of America.

It’s the answer that led those who’ve been told for so long by so many to be cynical and fearful and doubtful about what we can achieve to put their hands on the arc of history and bend it once more toward the hope of a better day.

It’s been a long time coming, but tonight, because of what we did on this date in this election at this defining moment change has come to America.”

One Race – the American Race. If you’re a citizen, you belong to the America Race.

All other “race” talk is just divisive, hate-filled gobbledygook.

Check out @SuptChang (Boston Public Schools), his tweet at 3:17 am today

OMG…If you need to use your Employee Assistance Program to ‘cope’, your whats wrong. Talk about frivolous expenditure for school teachers. Bad enough they are ‘offering counseling’ to students. They already need to toughen up.

Yeah, not so much when they lose what they believe to be a sure thing.

…and the Left is ALWAYS stunned when they find out how little most of us think of them.